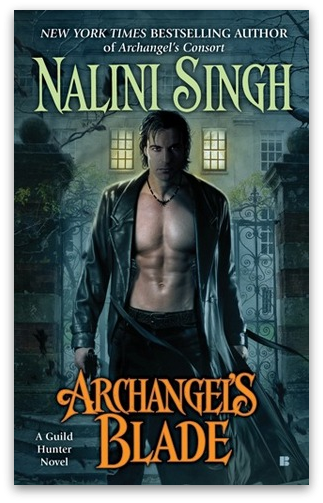 The severed head marked by a distinctive tattoo on its cheek should have been a Guild case, but dark instincts honed over hundreds of years of life compel the vampire Dmitri to take control. There is something twisted about this death, something that whispers of centuries long past…but Dmitri’s need to discover the truth is nothing to the vicious strength of his response to the hunter assigned to decipher the tattoo.

Savaged in a brutal attack that almost killed her, Honor is nowhere near ready to come face to face with the seductive vampire who is an archangel’s right hand, and who wears his cruelty as boldly as his lethal sensuality…the same vampire who has been her secret obsession since the day she was old enough to understand the inexplicable, violent emotions he aroused in her.

As desire turns into a dangerous compulsion that might destroy them both, it becomes clear the past will not stay buried. Something is hunting…and it will not stop until it brings a blood-soaked nightmare to life once more… (Goodreads.com)

I’ve loved Dmitri and his sexy vampire ways since his first appearance in Angels’ Blood, what can I say I love a bad boy! I’m seriously excited Nalini Singh has decided to give him his own story in the next installment of this great series, I can’t wait to read it.

I love the gothic feel of the mansion in the background and the leather pants and trench are definitely true to his character…Dmitri is a force to be reckoned with! The model is not what I pictured Dmitri to look like, but the shadowing on his face leaves that bit of mystery that totally reflects his personality.