A huge thanks to Chloe Neill for having me host a stop on her Hard Bitten Blog Tour here at Romancing the Darkside! Chloe’s latest novel in the Chicagoland Vampires series, titled Hard Bitten, releases May 3, 2011. For more information on Hard Bitten and Chloe Neill visit her here:
Website | Blog | Goodreads | Twitter | Buy the Book 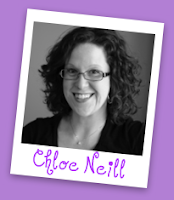 Chloe Neill was born and raised in the South, but now makes her home in the Midwest—just close enough to Cadogan House and St. Sophia’s to keep an eye on things. When not transcribing Merit’s and Lily’s adventures, she bakes, works, and scours the Internet for good recipes and great graphic design. Chloe also maintains her sanity by spending time with her boys—her favorite landscape photographer and their dogs, Baxter and Scout.
And now without further ado, the interview…

Please share 5 facts about yourself that would surprise your readers.

One, I don’t live in Chicago. 🙂 Two, I have three degrees, none of which are in creative writing or English. Three, I’m getting married in September in Hawaii. Four, I love Mexican food. Five, I have a dayjob.
What was your inspiration when you first started writing The Chicagoland Vampires

series?
I wanted to write about a girl in a band, and Merit (originally “Kate”) was in a band with Mallory. “Kate” was bitten by a vampire, and saved by Morgan, a sexy club owner. And then I had a mental image of Ethan, and once I knew who he was, the CV universe we now know came to fruition.

How has Merit changed so far from the young college girl we first saw in Some Girls Bite?
She has grown and matured into her position, definitely. She is more accepting of the tasks Ethan has given her and of
the sacrifices she has to make on behalf of the House.

Which character is most challenging to write in this series?

Making Merit vulnerable and strong simultaneously can be a difficult balance.

Do you sometimes struggle with keeping the vampire/werewolf storyline new and fresh?
Not really, because my focus is on the Houses and the drama that occurs in Chicago. I don’t try to do “a vampire thing” or a “werewolf thing.” Instead, I try to be true to the characters and imagine the kinds of issues and trouble they get into.

Are you a spontaneous writer or do you like to plan your story lines ahead of time?
A little bit of both. A novel generally has a pre-established arc, but I tend to write the individual scenes at the spur of the moment.

If you could be any paranormal creature, which would you choose?
Probably a fairy, who we’ll learn more about in DRINK DEEP.

What book is currently on your nightstand?
There’s a pile! I’m currently reading CHINA ROAD by Rob Gifford and the latest J.D. Robb “In Death” novel.

When do you feel most inspired to do your writing in the daytime or late at night?
I work during the day, so I write at night. There’s usually fewer distractions then, anyway.
Hard Bitten’s cover is by far the best in the series; do you ever judge a book by its

cover?
All the time. I actually avoided reading the OUTLANDER series because I wasn’t sure they

were for me based on their covers. And then I started reading, and fell in love!
Thanks for having me today!

My pleasure, thanks for stopping by!

Times are hard for newly minted vampire Merit. Ever since shapeshifters announced their presence to the world, humans have been rallying against supernaturals–and they’re camping outside of Cadogan House with protest signs that could turn to pitchforks at any moment. Inside its doors, things between Merit and her Master, green-eyed heartbreaker Ethan Sullivan are … tense. But then the mayor of Chicago calls Merit and Ethan to a clandestine meeting and tells them about a violent vamp attack that has left three women missing. His message is simple: get your House in order. Or else.

Merit needs to get to the bottom of this crime, but it doesn’t help that she can’t tell who’s on her side. So she secretly calls in a favor from someone who’s tall, dark, and part of underground vamp group that may have some deep intel on the attack. Merit soon finds herself in the heady, dark heart of Chicago’s supernatural society–a world full of vampires who seem too ready to fulfill the protesting human’s worst fears, and a place where she’ll learn that you can’t be a vampire without getting a little blood on your hands…(Goodreads)

One lucky winner will win a swag prize pack from Chloe Neill!

PLEASE FILL OUT THE FORM HERE!
Next stop on the tour…
Bewitched Bookworms