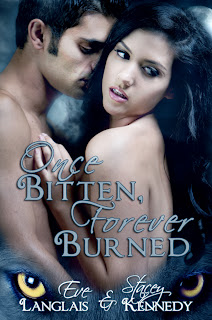 What if the one you loved was forbidden to you? What if you wanted nothing more than to be with something who should be your enemy? And what if the world you lived in demanded that you could never be together? This is what Bethany and Kiara face in the mini-anthology, Once Bitten, Forever Burned

.
Two bestselling paranormal romance authors, Eve Langlais and Stacey Kennedy have come together to write a smokin’ hot paranormal erotic romance.
Leave a comment or question with your email address, and a winner will be drawn to receive an ebook copy of Once Bitten, Forever Burned.
Once bitten, are they damned to forever burn without the touch of love?
A mini anthology containing:
Devon’s Redemption by Eve Langlais
Cruz’s Salvation by Stacey Kennedy
DEVON’S REDEMPTION by Eve Langlais
Bethany lost her one and only love to a war overseas. As if that weren’t bad enough, a brutal attack and claiming by a Lycan makes her life a living hell. She lives only for revenge until the day love comes back into her life and promises to rescue her from her misery. However, the mate who forced her isn’t about to let her go.
Devon died on the battlefield only to be reborn as a creature of the night. He fights to stay away from his one true love, but when he caves to his desire and sees her again, he discovers redemption is possible even for one who walks in darkness.
Warning: Contains scenes of violence toward the heroine and mentions of rape that might be offensive to some readers. Reader discretion is advised.

Cruz understands torment. A mortal turned vampire in the war, he has suffered untold loneliness and despair. That is until he meets Kiara—a werewolf he’s forbidden to love.
Though Kiara needs Cruz, and wants him forever, werewolves and vampires are bitter enemies. To make matters worse, her Alpha, also her father, suspects that Kiara pines for a mate. Mistaking her sadness for the longing she feels for Cruz, he sets out to give her all the happiness he can provide.
Together, Kiara and Cruz will have to fight against the rules placed upon them to hold onto their love. But an unwanted visitor creates a complication neither of them planned for. Milo, Kiara’s chosen mate, has come to stake his claim. Now, not only are lives at risk, but hearts are threatened and dreams hang in the balance.
Purchase your copy here:  Amazon

Eve Langlais is a Canadian in her late-thirties who’s happily married with three children. She resides in a small town in Ontario where she works from home as a webmistress and customer service rep. She enjoys spending time with her family, playing  video games, reading tawdry romance novels, and writing even naughtier ones. She claims her stories come from the voices clamoring inside her head. Discover what else her twisted mind has devised at www.EveLanglais.com.

Want your own copy of Once Bitten, Forever Burned?
Leave a comment with your name and email address for a chance to win!

Must be 18 years or older to enter.
Contest will run until March 23, 2011, 11:59 pm EST.
Winner will be chosen by random.org and have 48 hours to respond via email.
Open Internationally.
Next stop on the tour is:
Under The Covers Book Blog