Please join me in welcoming Felicity Heaton back to Romancing the Darkside! I’m really excited to have her here once again on her Paranormal Pandemonium Blog Tour to discuss her upcoming release Her Guardian Angel. There’s a lot to cover so let’s get right to it…

You’ve written about witches, werewolves and vampires in the past. What inspired you to write about angels?

It wasn’t intentional. I was thinking about all the preternatural creatures out there, and I had an idea for a vampire story, but as I was walking to work one day, I started thinking about what it would be like if I changed the vampires in it for angels, as I had wanted the story to involve artifacts that could contain powers. When I was researching angels, I came across Apollyon and all the conjecture about him, and I wanted to write about him. I put aside the original story, and came up with the idea for the Her Angel series instead. In the series, I wanted to explore whether feathers could be as sexy as fangs, and wanted to show a different world of angels to that which other authors were writing about. I wanted angels who were still under the command of a higher power, who served Heaven, and some of them Hell. They’re so different to vampires and the creatures I’m used to writing about. It’s a refreshing change from the worlds I normally dream up and get involved with.

Is it difficult to write about angels as sexual creatures when most people see them as pure and heavenly beings?

It can be, but it’s more about the readers accepting them the way that I write them. It’s about the reader being able to see them that way. I write them very honest. They’re all very masculine, powerful, and very passionate. They live by rules, banned from some things but given free rein to do others. A few of the stories actually deal with the issues that might face the angels as they pursue their women, the uncertainty of the heroine because of what they are and how they feel these incredibly sexy men shouldn’t be having such dark desires for them. I think as an author, if I deal with that in the story, then the reader will find it easier to accept that angels are not asexual in my series, and that they have passions and needs, are powerful and elementally masculine, and very intent on achieving whatever it is that their heart desires, which is more often than not the heroine.

What was your favorite chapter or scene to write in Her Guardian Angel and why?

There’s a very climactic scene that would probably be a terrible spoiler if I speak too much about it, but I loved writing that scene. It’s full of emotion, and it took a lot out of me to write it, but it was so intrinsic to the novel. It’s really intense and is one of the big turning points in the story. It’s the sort of scene that I love to write.

Which angel do you feel is the most Alpha in your Angels series?

That’s a difficult one. There are two angels who are very alpha. Apollyon is one of them, and he’s the hero in Her Dark Angel. He’s powerful, possessive and full of hunger for Serenity, his witch heroine. The second is Einar, the hero in Her Warrior Angel. He’s also very alpha, and he’s a hunter angel, so he’s used to getting what he sets his mind on, and in this case it’s Taylor, a half-demon half-human woman. The other two heroes in the series so far are less alpha, but just as sexy. They’re very emotional, passionate, and intense. Lukas, the hero in Her Fallen Angel is a very sensitive soul, who will do anything to show Annelie that he loves her and that they can be together regardless of the fact that he’s an angel. Marcus, the hero in my latest and the first novel length story in the series, Her Guardian Angel, is very strong, powerful and dutiful, but full of feeling in spite of how cold he starts out in the novel. He’s experiencing a lot of things for the first time, emotions that he’s never had a reason to feel before, and grows into an alpha during the course of the story.

Which characters do you find harder to develop, flawed heroines or tortured heroes?

Tortured heroes. I find if a character is going to give me trouble, it’s going to be the hero. I love to write tortured heroes, men who have been through hell in their lives and have something they need to get over in order to be with the heroine. That makes them hard to write because you need to strike the right balance and the progression in their romance needs to be natural, especially if the heroine is someone they would have difficulty falling for because of their tormented past. Readers want the romance to blossom quickly, but it’s hard to do that when there’s an obstacle between the hero and heroine in the form of his past and his feelings. It takes a lot of patience and sometimes a lot of rewrites to get it just right and believable.

Do you typically work with an outline, or just write?

Oh, I always work with an outline. I start plotting out scenes as soon as I get the idea for the story, and eventually I create an outline from those scenes. I split the outline into rough chapters and work from it. Sometimes my outlines can run to over ten thousand words. If I don’t have a particular scene outlined, it can really slow me down. I allow myself room to change things, or take a different course in a scene, but more often than not I write what was in my outline with few deviations. If I get stuck when I’m writing, it’s normally because I haven’t thought about the scene enough. I have to take a break, write down some notes about the scenes and have a think about it, and then I can find my flow again. There are a few stories I’ve written with very little in terms of an outline, just a plot in my head and a few notes, but the majority of the time I’m working from an outline.

Is there a theme or idea you haven’t written about yet but would love to work with?

Besides yourself, who is your toughest critic among family and friends?

I don’t tend to encourage my friends and family to read my books. My husband doesn’t read fiction, but he has read a couple of my novels, one many moons ago and one recently. I have a few crit partners online who are kind enough to run an eye over my stories when I need feedback.

Is there any particular author or book that influenced you in any way either growing up or as an adult?

I loved to read classic romances when I was a teen, and I think that’s influenced me in a big way, along with the fantasy novels I used to read too. My favourite novels are classic romances. Jane Eyre by Charlotte Bronte, and North & South by Elizabeth Gaskell, Pride & Prejudice and Persuasion by Jane Austen in particular. Those books have influenced me and my writing.

What projects are you currently working on?I’m editing Heart of Darkness, which is a vampire romance novel that is due out in October, and I’m also plotting out Masquerade, which will be the tenth story in my Vampires Realm series. I’ll be writing that soon, as well as the second book in my Shadow & Light Trilogy.

Just for fun:
Angels or vampires?
I should say angels, but I do love my vampires.

All time favorite movie?
The Lost Boys. I practically know it word for word.

If you were stranded on a deserted island and could only pick one person, who would you want for company?
I should say my husband, right? Other than one of my heroes (Valentine from the Prophecy Trilogy / Vampires Realm series or Apollyon from my Her Angel series would be nice), I would have to choose… Alexander Skarsgard. Super-yummy.

What’s your current guilty pleasure?
I’ve just watched True Blood from the start of Season One through to the end of Season Three. I also find anime is a great guilty pleasure of mine. I tend to get into them so much that I watch hours at a time. It’s very distracting.

Felicity, thank you so much for taking the time to answer all my questions and congratulations on the upcoming release of Her Guardian Angel! 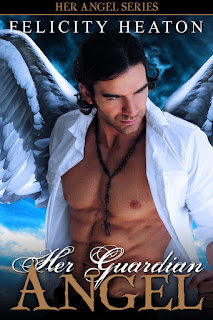 Her Guardian Angel by Felicity Heaton

A simple mission becomes a fight for survival in this fantastic instalment in the Her Angel series.

A guardian angel dedicated to his duty, Marcus will do whatever Heaven asks of him, but even his loyalty has its limits. When his superior orders him to gain Amelia’s trust through seduction, Marcus starts to question his mission and his feelings for the beautiful woman he has watched over since her birth.

Amelia has gone from one bad relationship to another, so when a gorgeous guy moves in next door looking like Mr Right, she hopes he doesn’t turn out to be another black knight in disguise. But there’s more to Marcus than meets the eye, and when he rescues her from three demonic men, Amelia is thrust into his nightmarish world—a world where God and the Devil exist, and only one angel can save her from death—Marcus, the angel she’s falling in love with.

On the run from demonic angels and the Devil himself, aided by Marcus’s angel friends and their amazing women, fighting for survival against the odds, Marcus and Amelia discover a love that will last forever.

A love so strong it will shake Heaven and Hell.

About the Author:
Felicity Heaton is a romance author writing as both Felicity Heaton and F E Heaton. She is passionate about penning paranormal tales full of vampires, witches, werewolves, angels and shape-shifters, and has been interested in all things preternatural and fantastical since she was just a child. Her other passion is science-fiction and she likes nothing more than to immerse herself in a whole new universe and the amazing species therein. She used to while away days at school and college dreaming of vampires, werewolves and witches, or being lost in space, and used to while away evenings watching movies about them or reading gothic horror stories, science-fiction and romances.

Having tried her hand at various romance genres, it was only natural for her to turn her focus back to the paranormal, fantasy and science-fiction worlds she enjoys so much. She loves to write seductive, sexy and strong vampires, werewolves, witches, angels and alien species. The worlds she often dreams up for them are vicious, dark and dangerous, reflecting aspects of the heroines and heroes, but her characters also love deeply, laugh, cry and feel every emotion as keenly as anyone does. She makes no excuses for the darkness surrounding them, especially the paranormal creatures, and says that this is their world. She’s just honoured to write down their adventures.

If you want to know more about me, or want to get in touch, you can find me at the following places:
My Website | My Blog | Facebook | Twitter | Goodreads

Felicity is giving away one (1) ecopy of the first book in the series Her Dark Angel to one lucky winner!

Giveaway Guidelines:
Must be 18 years or older to enter.
Giveaway ends August 6, 11:59pm, EST.
Open Internationally.
To Enter:
PLEASE FILL OUT THIS FORM.
{Entries in the comments will NOT count!}