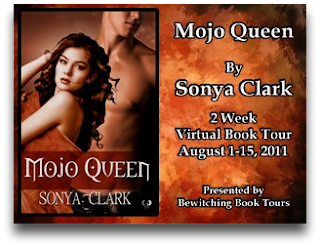 Please join me in welcoming author Sonya Clark on my stop for the Mojo Queen Virtual Book Tour! Read on for Sonya’s guest post, an enticing excerpt and a fabulous giveaway!

I like vampires and shapeshifters just as much as the next girl, but what I really love is magic. Witches and wizards and dark dangerous sorcerers make my favorite paranormal protagonists. The main character of my new urban fantasy Mojo Queen doesn’t make a habit of calling herself a witch but she certainly is one. Roxanne Mathis is a paranormal investigator who can see auras and spectral energy. To help her clients with their supernatural problems, she also uses hoodoo folk magic. She’s practiced hoodoo root work since she was a teenager when she met the woman who became her teacher in a graveyard at night.

Whereas voodoo is a religion, hoodoo is more of a practical type of magic. Root workers might ask for aid from whatever supreme being they pray to, or none at all like in Roxie’s case. Roxie believes in the power of nature. Practicing a type of magic that uses herbs and roots as well as the belief of intention and the energy of both her own will and the world around her suits Roxie perfectly.

Hoodoo does have some similarities to more traditional magic. With other types of magic you might find talismans charged, or imbued with intention and energy, for a specific purpose. Hoodoo has the famous mojo hand. This is a small red flannel bag with ingredients for various purposes. A mojo hand designed for luck in gambling will have different ingredients than one designed for luck in love. Roxie’s specialty is crafting mojo hands used for protection. That’s a handy thing to have when going up against angry ghosts and nasty demons.

When Roxie is hired to help a group who dabbled in the dark side and didn’t like the consequences – one of their number being possessed by a demonic entity – she thinks she’ll be dealing with a sorcerer who practices a more traditional type of ceremonial magic. What she finds is something very different. When creating the character of sorcerer Blake Harvill I wanted something to make him stand out, a powerful level of high magic that could be both dangerous and seductive.

Here’s a snippet from Mojo Queen:

With Chaos, you are off the map, and here be dragons. Your average structured practitioner will find themselves a comfortable home within a single mythological pantheon, usually Celtic, Egyptian or Norse. A chaote could call on a Norse god and an Egyptian goddess, or use Stan, Kenny, Kyle and Cartman to represent the four elements. They’ll use whatever works, because what’s important, what the real fuel for their magic is, is their own intention, their own belief in what they are doing. A female chaote looking to bring out her own inner warrior could invoke the Celtic Morrigan, Greek Athena, Hindu Durga, Egyptian Sekmet–or Ripley from Aliens. Or all of them, and the Flying Spaghetti Monster help whoever that chick’s gunning for.

I may have had a can of magic whoop ass, but Blake the Chaote Sorcerer had a fifty-five gallon drum.

Too bad Blake didn’t stick to one of the most important rules of magic: never summon something you can’t banish. With a murderous demon on the loose Roxie needs all her magical skills and then some. She’s going to need something stronger than High John the Conqueror root and a mojo hand to deal with her ill-advised attraction to Blake the Sexy Sorcerer. When hoodoo and high magic collide, there may be no stopping the wild tangle of energy the two create together. 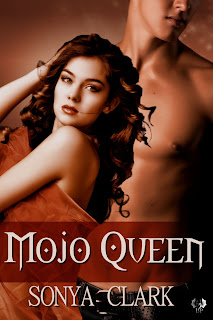 Hoodoo and high magic are on a collision course.

Roxanne Mathis isn’t like everyone else. Not only can she see auras and spectral entities, she can mix herbs and roots for spells to do good or ill. She can even light a candle without the benefit of a match. But when she’s hired to exorcise a demon from a young girl, she discovers the limits of her powers.

With her vampire cousin at her side and a sexy sorcerer chasing her on the rebound, Roxie sets out to send that evil entity back to where she came from.

Nothing is as it seems and Roxie’s in over her head. It’s not going to be enough for her to just be a paranormal investigator and old school root worker – to defeat this demon, she’s going to have to be the Mojo Queen.

Mojo Queen is available at:
Amazon

I sat in the chair opposite the loveseat, placing the candles on the coffee table. Glanced at him to make sure I still had his attention, which of course I did. One side of his mouth still curled up in a smirk, eyebrow quirked. I sat back, let myself sink into the comfy chair and relax as much as possible. First the candle on the left. Focusing on the wick, I visualized a tiny flame erupting from it–concentrating my will, pouring energy into my intention. I could feel myself sliding further into exhaustion as energy curled inside me, but after a long, agonizing moment the candle came to life. I let out a breath before I could stop myself, avoiding his gaze. I didn’t want him to know how much this was taking out of me, but I had a bad feeling it was obvious. I turned my attention to the other candle and though it took even longer this time, it too lit. I felt almost as bad as I had this afternoon.

Blake reached for a backpack on the floor I had not seen in the darkness. He opened it, fished something out, and tossed it to me. I didn’t so much catch it as let it fall in my lap. A chocolate candy bar.

It was my turn to quirk an eyebrow. Waving the bar at him I said, “What, is this to ward off dementors?”

The smirk became a genuine smile again briefly. “Something like that. You need to eat.”

I gave him a skeptical look.

“You know you’re using energy with that.” He gestured at the candles. “The energy needs to be replenished.”

I rolled my eyes but tore open the wrapper. The chocolate tasted, well, damn, like mainlining something illegal. Maybe he had a point. I was halfway through the bar when he spoke again, as if there had been no pause.

“Especially since you don’t really know what you’re doing yet.” Even in the low candlelight I had no trouble seeing the wicked amusement in his dark eyes.

I managed to finish chewing without choking, tossed the remainder of the candy bar on the coffee table and sat up straighter. “Why don’t you tell me why you’re here? Or better yet, tell me where I can find your demon lover? So I can send her back to Hell.”

“Well, actually, that’s exactly why I’m here, Roxanne.” Like we were discussing insurance or something. “I want you to find my demon lover.”

Gob-smacked, all I could manage was, “Huh?”

“And I want you to send her back to Hell.”

About the Author:
Sonya Clark grew up an Army brat, living all across the United States as well as Japan and Germany  by the time she graduated high school. Books were one of the few constants in her life. An eclectic reader, she always had a special love for the paranormal and is a lifelong fangirl of all things that go bump in the night.

A deep love of music is another constant thread in all of her fiction. She writes at a desk equipped with High John the Conqueror root and a mojo hand. She has worshipped at the mother church of country music, traveled the back roads of the blues highway, been to the crossroads at midnight, and though she’s never cooked up a mess of polk salad, she has been to Graceland four times.

She lives with her husband and Yorkie in Tennessee. 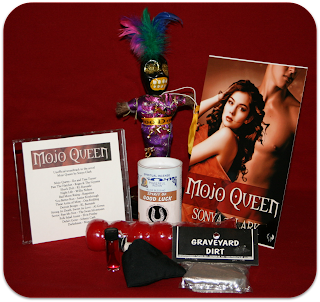