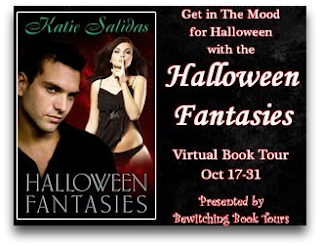 Today I’m joined by the awesome author Katie Salidas in hopes of getting you all in the mood for Halloween! Katie is promoting her latest sensual tale of vampires, Halloween Fantasies, and has stopped by to share about her love of vampires and even has a sexy excerpt for us!
So without further ado….

What Led Me in the Direction of Vampires
by Katie Salidas
We all have our niche. Our thing we really like to write on. It may be broad and encompass an entire genre. Some people like to explore the depths of high fantasy and create whole new worlds. Others may take a different approach and only focus on a specific type of creature.
Me, I like to write about vampires. In fact every story I’ve written has included those creatures of the night in one way or another.
Personally, I think vampires are Sexy, and this is why I like to write about them.
They are dark and sexy and mysterious. They promise nights filled with danger and passion—and that’s something seriously lacking in most of our lives.
As with any fiction, I think my love of vampires has a lot to do with the “escape factor.” It’s that ability to set aside the normal day-to-day existence and dare to step into a world filled with creatures and things that we can only dream about.
Sure, at times those things can scare us, but more often than not, they just send that chill of excitement up our spines.
Think about it, who doesn’t want to be the heroine of a story being scooped up by the dark and dashing vampire? C’mon admit it; you want to feel his hot breath on your skin and the sensual scrape of his fangs before he sinks his teeth into you. Oh, he won’t kill you. He just wants a taste. A prequel if you will before your night of excitement truly begins.
Writing about them and making up new stories is both fun and fulfilling. I can live the fantasy as well as shape it. It’s the best of both worlds. The biggest payoff though, is seeing others fall in love with my vampires as much as I have. 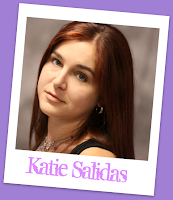 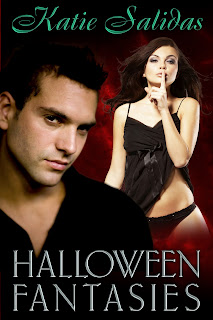 Touted as the sexiest party of the year, the annual Halloween Fantasy Ball is the one place a girl can let loose and succumb to her wildest fantasies.

Disguised as a sexy vampire huntress, Sasha captures the attention of Dante, a real life creature of the night. For Sasha, meeting bona fide vampire is enough to fulfill one of her life long fantasies. She’s ready to go home a happy woman.

But Dante has other plans. It is after all, a night of fantasies, and he has a few of his own to share.

Thank to Katie Salidas for stopping by today!
Check out the entire tour schedule HERE.