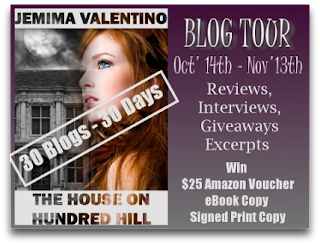 I’m really excited to be starting off Jemima Valentino’s The House on Hundred Hill Tour on my blog today! Please join me in welcoming this fabulous author to Romancing the Darkside. If you love your romance with a little kink you’re going to love her latest release, you can read my review here and enter the giveaway for a chance to win your own copy!

Firstly I would really like to thank Lori for inviting me to Romancing the Darkside, and for opening the blog tour for my latest book The House on Hundred Hill – officially released today!

The House on Hundred Hill actually started as an entirely different project.  The original story had no paranormal element at all, but I simply wasn’t happy with it.  So, after a few months of procrastination and chatting things over with my incredible editor, I decided to rewrite the entire thing. After taking the decision to keep some of the original elements but scrapping the rest, my main character finally started to come to life for me, which hadn’t happened in the earlier version. I think it is so important for an author to truly connect with their characters and know them as well (if not better) than they know themselves.

My lead character is Jessica Rylan; a sexually frustrated and fiery woman that is trying to emotionally come to terms with her own dark erotic desires.  When she meets the gorgeous Nate Black in a bar, he begins to awaken something in her that she has desperately tried to keep buried.  However, little does Jessica realise that Nate is not entirely human and he is only there to lead her further into temptation.  As the story unfolds, Jessica is pulled further into an ancient struggle between the Nephilim and the Gregori, and must place her trust in Nate and his mysterious brother Draven to survive.

I’m also delighted to announce a tour wide giveaway which starts right here on Romancing the Darkside!  In celebration of the new release I’m giving away prizes of a $25 Amazon gift voucher, an e-book copy and also a signed paperback copy of The House on Hundred Hill to lucky tour followers.  All you have to do is enter your details below in the Raffle Copter to be in with a chance to win.  Winners will be announced on my blog on November 14th.

Thanks again Lori for having me, it’s been a real pleasure to be here! 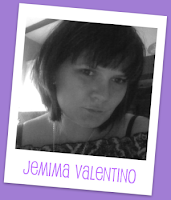 Jemima fell in love with reading and writing as a child but it was only in 2009 that writing became an obsession. After months of procrastination and plucking up the courage, she published ‘His Elle’ in January 2011 and now has a full blown desire to continue writing. 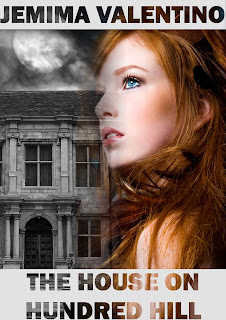 Jessica Rylan has spent her entire life trying to fit in, despite feeling deep down that she doesn’t quite belong.  A slave to passions that she doesn’t quite understand, she does her best to simply ignore her burgeoning sensuality. Little does Jessica realize that a seemingly chance encounter with the handsome Nate Black will turn her world upside down.

All it takes is one garden party invitation to pull her into an ancient struggle, one where she must place her trust in Nate and his mysterious brother Draven to survive.   As Jessica becomes seduced by the ancient and mystical world of the Nephilim, she finally begins to understand her own dark desires.  Because Draven Black is searching for something… Something only Jessica can provide.

1 Ecopy of The House on Hundred Hill.
Giveaway Details:
Must be 18 years or older to enter. Giveaway runs from October 14th – November 14th. Open Internationally.
To Enter:
You must be a GFC follower and fill out this Rafflecopter form below.

A huge thanks to Jemima Valentino for the awesome guest post and a wonderful giveaway!