Posted 30 October, 2011 by Lori @ Romancing the Dark Side in Giveaways, Guest Posts / 4 Comments

Author S.J. Davis is joining us today on her Vampires & Steampunk Virtural Book Tour! S.J. is promoting her latest release Invisible Sun, a steampunk novel with a paranormal twist. What is a steampunk vampire you ask? Well, read on to find out and enter the giveaway for a chance to win a copy of your own!

What is a Steampunk Vampire?
Steampunk is such a great sub-genre for the kind of book I’ve always wanted to write! The rules are nebulous and the lines confining your imagination are full of gaps. With steampunk – the books, art and role play/costuming – creativity is the only rule.
There are certain “ideals” when you think of steampunk. Goggles, gas lanterns, airships, corsets, steam locomotives, for example. Or adventuring Victorian woman running about containing dastardly villains with a click of their parasol’s poison dart, but mostly, everything is in flux. Steampunk tropes have recently found their way into alien stories and the Wild West. And this is all good and fun!
When I began my short novel, Invisible Sun, I wanted to begin with the perils of the Industrial Age and man’s obsession with alchemy. Through genetic engineering, man inadvertently creates a new race of vampires in Victorian London. But instead of these vampires being scavengers, or prowling the fringes of society, these creatures are highly evolved and respected organizers of law and guardians of science.
Unfortunately, one stray drop has spilled from the genetically perfected vein. A vampire turns rogue and attacks the women of London’s East End, upending the precarious peace between vampires and humans. Chaos reigns when a virus, stemming from the genetic experiments, is unleashed on the human community. But soon, a sexy vampire and a beautiful Victorian woman work together to stop the spread of disease…but, there could be a pay a high price for a hopeful ending.
With Invisible Sun, I felt free to create fantastic scenarios with steampunk vampires living in a gaslight and steam powered world. I blended them together with a dash of futuristic and dystopian genetic science then a hint of romance. I hope this keeps the reader turning pages! It’s sexy, scary, retro, with high stakes to add more steam to your traditional steampunk. 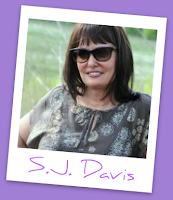 SJ Davis is the daughter of an ex-patriate British mother and a Southern Baptist ex-CIA father. As a child, she spoke in silly accents and recounted outlandish tales of fantasy over afternoon tea and to this day it remains her favorite activity. Born in Long Island, NY, she was raised in the suburbs of Washington DC and went to school for a very long time (University of Virginia and George Mason University), married an all-around wonderful man, had two kids (smart, funny, full of opinions), moved from Virginia to New Jersey to Philadelphia to Chicago, and began her writing career. She is a believer in fate, an avid tea drinker, a stiletto aficionado, Doc Marten worshipper, punk rock listener, and lover of flip flops and cardigans. She has a terrible sense of direction, loves gummy bears, and is a Johnny Depp fangirl (a woman after my own heart!).

Giveaway Details:
Must be 18 years or older and a GFC Follower to enter.
Giveaway runs from October 30th – November 6th.
Open to US shipping ONLY.
To Enter fill out the Rafflecopter form below.
Thanks to the wonderful S.J. Davis for sharing and stopping by today!