Welcome to my stop on the Diary of A Vampire Stripper Blog Tour! Today I have the pleasure of having author Cinsearae with us, chatting about dating in the paranormal world…we think we have it bad ladies? Just wait until you hear about this heroine’s dating life! Be sure to show our guest author some love and enter the giveaway for a chance to win some fabulous goodies!

“DATING MONSTERS: WHich WOuld You Pick?”
By Cinsearae S.

There are lots of women who probably dream of having a vampire boyfriend…what it would be like to date an immortal; the limitless passion, the potential of becoming just like their lover and being with them for eternity. Or maybe you’d want to date a shape-shifter. How fascinating would it be to watch your lover transform into an animal right before your eyes? And aren’t paranormals known to be a bit more sexier, more alluring, and have more stamina than the average human? But how about dating someone less…appealing? Someone who has issues with being undead, but on a more ‘decayed’ level? Someone who’s just as bad as a zombie, but you wouldn’t have to worry about him or her eating your brains?

These particular creatures are barely a step up from those horrifying, cranium crunchers. These particular creatures are ghouls. They’re cadaver munchers, and they don’t care what kind of condition their next meal is in, as long as it’s already deceased. Could you deal with your significant other finding their midnight snack along a roadside or in a cemetery? Or smelling like the same? Could you also deal with their dessicated appearance? And despite it all, you still have his or her undying love and devotion?

Poor Audra has a lot on her hands. Her life is tough enough as it is, forcing herself to work as a stripper to make ends meet. But finding out her lover is a vampire at the worst possible moment, then being turned by him against her will, not only does she have to deal with the cumbersome task of drinking blood in her own special way, her human boyfriend is turned into a ghoul by her rather jealous husband. On top of that, she finds out her best friend Lucinda whom she works with in the strip-club is a werewolf, the alleged enemy of vampires. But that doesn’t stop this dynamic duo in the least. Their friendship–and great sleuthing skills–is what stops both their clans from having a war in the city streets [Dead bodies turning up on either’s turf and blaming each other for the mess is more than enough to cause a ton of squabbling, but they solve the mystery in the nick of time]. Plus, other problems still hover over them all, as a group of radical cops know about their kind and are hell-bent on destroying them.

Although there’s not a whole lot of time for romance, Audra’s human boyfriend sticks by her side through thick and thin, and when her jealous maker decides to hurt her by hurting him, well, there’s some scores that have to be settled. Ghouls are considered beneath all of their kind and are frowned upon; the absolute bottom-of-the-barrel monster (next to zombies), but Audra and Lu refuse to cater to the rules of paranormals. C’mon this is the 21st century after all! Still, having a ghoul for a boyfriend is like taking care of an overgrown, messy zombie baby…if there ever was such a thing. And least her best friend is there to help her out with yet another new found problem.

DIARY OF A VAMPIRE STRIPPER
BY CINSEARAE S.

Trying to juggle college tuition and rent, young Audra Perez seeks a fast fix to her financial woes by auditioning as a stripper for the Hoochie Coochie Club. What she didn’t expect was to actually be chosen. Barely a few months into her new job, she becomes acquainted with a mysterious, distinguished gentleman by the name of Darren Von Eldon, and they secretly begin dating against club rules. Then one passionate night at his beach house changes Audra’s life forever.

Now as a newly-awakened vampire, this only adds to her day-to-day mundane burdens. Refusing to drain humans, she hunts birds for nourishment, and finagles a way to avoid going to classes during the day. But bigger problems loom ahead. Radical cops that know about her kind roam the night, seeking to destroy any and all ‘monsters’, and her best friend’s family has a bone to pick with Audra’s. Headless human bodies are turning up on vamp and were turf, each side blaming the other for the murders. It’s up to Audra and her friend Lu to figure out who’s doing the killings before an all-out war happens between their families, their search leading them beneath the city streets to encounter an abomination neither one of them will ever forget.

And the relationship issues? Well, it’s not easy dealing with a boyfriend and a vampire husband, so let’s not even go there…

“Plain-spoken and brash, Diary of a Vampire Stripper is a graphically wild lunge through the trials and tribulations –both amorous and otherwise– of newly-turned vampire Audra as she sets the paranormal world on its ear.” ~Tony-Paul deVissage, author of The Night Man Cometh 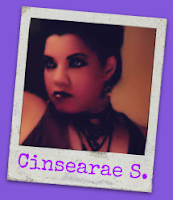 Dark Paranormal Romance/Horror author Cinsearae S. is the creator of The ABRAXAS Series and BOLEYN, Tudor Vampire, a Top Ten Finisher at the Predators & Editors Readers Poll in 2010. A digital artist, jewelry designer, and still photographer, she is also Editor/Publisher of award-winning, Dark Gothic Resurrected Magazine (http://BloodTouch.webs.com/darkgothicmagazine.htm). She also received the Author’s Site of Excellence Award in 2007 from Predators & Editors, and is a Cover Artist for Damnation Books and independent authors. Her website recently won a Golden Horror Award from Horrorfind.com.

An avid fan of ‘old school’ horror movies and their villains (Freddy, Jason, Michael, Pinhead…) Halloween is her favorite time of the year. She has always been drawn to the flipside of life — the supernatural, odd, bizarre, Gothic and ‘darkly beautiful’ always being an inspiration to her. Find her on Facebook/YouTube/Twitter @Cinsearae. You can also reach her through her website: http://BloodTouch.webs.com. She welcomes all writers/authors, artists, and lovers of the darker side of life to join her writers’ group on FaceBook (search: Gratista Vampire Clan).

Cinsearae is giving one lucky winner a great swag package which includes: a T-shirt (Large), keychain, stickers, and a pair of earrings and a 8-piece Gothic postcard set from my Etsy shop www.etsy.com/shop/MistressRae13 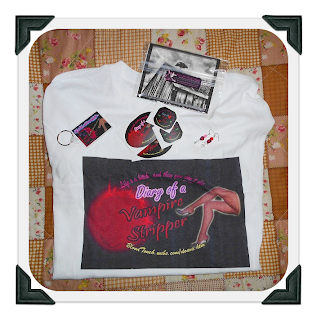