INHALE, an urban fantasy romance by Kendall Grey, is now available in paperback, e-book for Kindle (MOBI) and Nook (EPUB). INHALE is the first book in the JUST BREATHE trilogy. Kendall is donating all profits from the sale of the trilogy to programs that educate people about whales and the challenges they face. Watch the following video to find out why…


Kendall encourages interested readers to consider purchasing an e-book instead of a paperback.

E-books save trees, cost considerably less, and bring in much more money for the whales. Thank you for supporting INHALE, and most importantly, the whales that need our help. 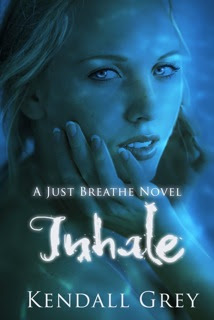 Strangers in reality, inseparable in dreams…

After years of suffocating under her boss’s scrutiny, whale biologist Zoe Morgan finally lands a job as director of a tagging project in Hervey Bay, Australia. Success Down Under all but guarantees her the promotion of a lifetime, and Zoe won’t let anything—or anyone—stand in her way. Not the whale voices she suddenly hears in her head, not the ex who won’t take no for an answer, and especially not the gorgeous figment of her imagination who keeps saving her from the fiery hell of her dreams.

Gavin Cassidy hasn’t been called to help a human Wyldling in over a year, which is fine by him. Still blaming himself for the death of his partner, he keeps the guilt at bay by indulging in every excess his rock star persona affords. That is, until he’s summoned to protect Zoe from hungry Fyre Elementals and learns his new charge is the key to restoring order in the dying Dreaming. He never expects to fall for the feisty Dr. Morgan…nor does he realize he may have to sacrifice the woman he loves to save an entire country.

*This book contains graphic language, sex, and some violence. Not suitable for readers under the age of 18.

**The author will donate all profits from the sale of the JUST BREATHE trilogy to programs that educate people about whales and the challenges they face. 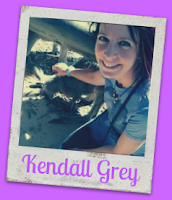 Kendall Grey is a whale educator and urban fantasy writer. She lives near Atlanta, Georgia with her ghost husband, a random rainbow, a gossamer-winged fairy, a wild imp, and a ferocious miniature long-haired Dachshund who keeps them all in line. INHALE is the first book in the “Just Breathe” trilogy.