Posted 9 May, 2012 by Lori @ Romancing the Dark Side in Blog Tour, Giveaways, Guest Posts / 9 Comments

Today I’m hosting a stop on the Mary Ann Loesch Blog Tour hosted by Reading Addiction Blog Tours. Mary’s latest release Nephilim, is a mix of urban fantasy and paranormal romance with a little dose of the dark side. Stick around for Mary’s take on judging a book by its cover and don’t forget to enter the giveaway for a chance to win your own copy of this thrilling book!

My mother always said, “Never judge a book by its cover.”

It’s possible that she was using the phrase as a metaphor for not judging people, but when it comes to that saying and applying it to a real book, I know now that she was wrong. People always judge the book by its cover! It’s the main marketing tool that authors have at their disposal. The cover gives the reader an idea of what the book might be about, as well as, the genre. One of the biggest things I’ve learned as an author is how important it is to fight for your book cover because once it’s been approved by you or your publisher, there is no going back.

So how did I learn this lesson? With my novel, Nephilim.

Nephilim is an urban fantasy. For those of you confused on what that means, let’s take a moment to define it and its buddy paranormal romance. Urban fantasies take place on Earth and usually in an urban or city location. This genre will have supernatural creatures in it like vampires, werewolves, or in my case, angels. The action drives the story forward for the reader. Yes, there may be a romance in the tale, but it’s not the focal point which means our characters don’t have to end up happily ever after. In a paranormal romance, you have basically all the same elements. However, there is one big difference: the romance is the focus of the story and every bit of action in the novel tends to add to the romantic tension. Our hero/heroine will definitely end up together in the end.

Because of these close similarities, publishers often use similar styles of book covers for both genres. I find this to be very misleading for readers! If your novel is an urban fantasy but has a hot guy with little clothing on as the front cover of the book, readers are going to say, “Ah, it’s a romance.” The problem is that if they are an avid romance reader who has come to expect certain things in the genre, they may feel cheated when the book with the hot guy on the front doesn’t deliver what they are expecting. Or if you are a man who likes urban fantasy, you might take one look at the front cover, think “Chick book,” and move on. There goes a potential sale and all because the book cover doesn’t accurately represent the story you’ve written!

While the guy on the cover of Nephilim looks like a hunk of burning love, (his name is Jimmy Thomas and he’s a book cover model with a Facebook page) I’ve always regretted that I didn’t push harder for a different style of cover. Part of the reason why I didn’t was because I was inexperienced and didn’t realize the full impact the cover would have on sales and perception of the book. Most of my reviews from Nephilim have been very positive, but several reviewers have commented on the fact that the cover is a bit misleading.

Is this something to dwell on as a writer? No! But it is something to think very carefully about for your next novel. My experience with the Nephilim cover had a huge impact on my choice of book cover for my young adult novel, Bayou Myth. The original release date for Bayou Myth was supposed to be in February of this year, but I wanted the cover to be perfect. It may have meant pushing the release until June, but for me, it’s worth it. Hopefully, my readers will be happy, too! To see the Bayou Myth cover, drop by my blog, Loesch’s Muse: http://www.loeschsmuse.blogspot.com.

My advice to authors regarding book covers is to celebrate the thrill of seeing your novel’s cover. Then take a step back and ask yourself, “Does this represent my work?” If the answer is “yes”, congrats! If the answer is “not really” or “no”, then go back to your publisher and keep trying until you are both satisfied!


Faye is a nephilim (half angel/half human) and unaware of her stalker. She believes the other angels have asked her to investigate Nathan because of the high mortality rate of his clients. Despite her distaste for his methods, Faye discovers that Nathan is not a rogue and is forced to question her mission. Unwittingly she learns her stalker’s secret: he’s also a nephilim whose twisted plot is to exterminate the angels and breed a new race of beings with Faye. Knowing this, she realizes that teaming up with Nathan and using his unique artistic abilities may be the only way to stop this nephilim’s hellish plans. 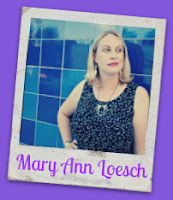 Mary Ann Loesch is an award winning fiction writer from Texas. Her urban fantasy, Nephilim,was published in July 2011 by Lyrical Press Inc. She is an avid blogger. Mary Ann has also contributed stories in the horror anthology, All Things Dark and Dastardly. Her latest book, Bayou Myth, will be released in the summer of 2012. While she loves dirty martinis and cuddling with her dachshund, she loves fan mail even more!
For more information on Mary, visit her here:
Website | Facebook | Muse Blog | Twitter

One lucky reader will win an ecopy of Nephilim by Mary Ann Loesch!
Enter via the widget below:
a Rafflecopter giveaway