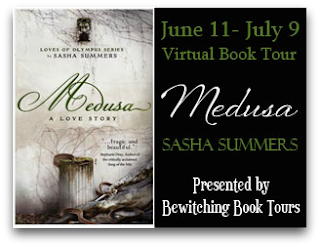 Welcome to my stop on Sasha Summers Virtual Book Tour for her latest release and the first in her new Loves of Olympus Series,  Medusa, A Love Story.  Sasha is here to share her inspiration for her story and there’s a great book excerpt you’re going to love. Get ready to be moved and experience a love story that is truly unique! You can find my review here.

Dreams and Writing
By Sasha Summers

I’m a fan of romance and the darkside. I know I’m not alone. Paranormal romance (which goes hand-in-hand with romancing the darkside) is awesome – with all of its sub-genres. I love reading about vampires, shape shifters, angels, demons, mermaids, and witches, but I can’t write them. I hadn’t planned on writing any paranormal, it wasn’t my genre.

But then I had a dream. I know a lot of authors have inspirational dreams, but not me. This was the first, and only, dream I’ve ever had that became the basis of one of my books. I woke up completely overwhelmed, heart-pounding, mind-racing, and frantic to help the man I’d dreamed.

All I knew was that he was running, madly, across a grassy field. He didn’t care about the billowing black clouds, the fire-storm that singed the cloak from his shoulders, or the cavernous hole that opened in the ground before him. But I did. I was terrified. I didn’t understand why he wasn’t searching for shelter. I looked into that pit and knew it was the fires of Tartarus – I don’t know how I knew, I just did. And I knew – again, don’t know how – that this man was too good and honorable to ever end up there. But he didn’t waiver, his eyes were riveted on the clouds above.

And when he smiled a little, I looked up too. A woman was free-falling towards the hole. He leaned out to catch her.

I woke up, ‘knowing’ way more than the dream showed me. By the time I met with my critique group and spilled the story to them, I was pretty obsessed with telling the story that was demanding to be written. It was a huge comfort to get their critique on the first chapter. If they hadn’t been as phenomenally supportive of Medusa, I’m not sure I would have pursued publication. But they were. And now my muse is firmly rooted in ancient Greece and Olympus… for now.

MEDUSA: A LOVE STORY
LOVES OF OLYMPUS ~ BOOK ONE
BY SASHA SUMMERS

Medusa is ruled by duty, to her Titan father and the Goddess Athena. She’s no room for the tenderness her warrior guard, Ariston, stirs. When Olympus frees her from service, her heart leads her into the arms of the guard she loves… and curses her as the creature with serpent locks.

Ariston goes to war with a full heart… and dreadful foreboding. He learns too late of the danger Medusa faces, alone, and a Persian blade sends him into the Underworld. But death, curses, nor the wrath of the Gods will keep him from returning to her.

An Excerpt from Medusa: A Love Story

“You asked for an audience, you have it. Now tell me, where do you belong?” Hades’ voice was deep, emotionless.
Ariston swallowed. “Athens.” He met Hades’ gaze, but the God revealed nothing to him.
“Why? You died with honor and glory. Is that not what every soldier wants?”
“My wife…” His voice wavered.
Hades brow lifted slightly. “Lives. You do not.”
“She is in danger.”
“Earthly danger. She is no longer your concern, Ariston.”
“The danger she faces is not earthly, but far from it…” Ariston’s voice was hoarse, his desperation mounting. He took a wavering breath before he began again. “She is everything to me. I am proud of my death, but it means nothing if she is in peril. I must know.” Ariston kneeled. “I beg you. I beg you to return me to Athens.”
Ariston waited, willing himself to be strong.
“Who is this wife?” Hades asked.
“Medusa of Athens.” He paused. “Now of Rhodes.”
Hades was silent, his dark blue eyes regarding him steadily.
“When I die—” Ariston began.
“You are dead,” Hades assured him.
“When I return…die again, I would serve as guardian to Tartarus. I am a skilled warrior, a skill I might offer you.” He spoke with confidence.
“You vex me,” Hades muttered, the slightest crease appearing between his eyes. “You offer this to me for a woman?”
Ariston nodded. “She is worthy.”
Hades was silent again, his eyes shifting to the blue-white flames in the massive
fireplace.
“My words do not…adequately express the love I have for this woman. But I cannot leave her. She is at risk. I must return.” The words came without thought. How could he justify such emotion to a God who reviled affection or companionship? “As Olympus has my arm and sword, she has my heart – a mortal, and perhaps weak, heart.”
The room was silent for too long. He would have to fight his way out…
“It is a weakness not reserved for mortals alone, Ariston of Rhodes.” Hades’ words were so soft Ariston feared they’d not been spoken. But Hades continued, strong and clear. “I will return you to your ship so that you may lead your men to victory. Too many have fallen from this war and I would see it end. When that is done, you may go to your wife.” He paused then added, “When you return to my realm, I will have your fealty.”
The God of the Underworld, Lord of Death, gave him mercy? Mayhap there was one God he might serve with honor.
Ariston vowed, “You have it.” 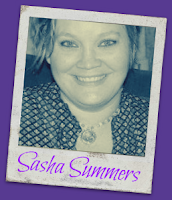 Sasha Summers is part gypsy. Her passions have always been storytelling, history, and travel. It’s no surprise that her books visit times past, set in places rich with legends and myth. Her first play, ‘Greek Gods and Goddesses’ (original title, right?), was written for her Girl Scout troupe.
She’s been writing ever since. She loves getting lost in the worlds and characters she creates; even if she frequently forgets to run the dishwasher or wash socks when she’s doing so.
Luckily, her four brilliant children and hero-inspiring hubby are super understanding and supportive.
Sasha is an active member of RWA and several Texas Chapters. A self-proclaimed movie-addict, she is full of all sorts of useless movie tidbits and trivia.