Posted 6 July, 2012 by Lori @ Romancing the Dark Side in Book Promotions / 0 Comments

Between Friday 6th and Sunday 8th of July, you can get your hands on her In Heat series at Amazon Kindle stores for free. The In Heat series is a hot romance story about a sexy millionaire black panther shapeshifter and the human female who is his destined mate. If you like your stories a little on the wild and wicked side, with a good dash of tension and action, then pick up your free copies now. 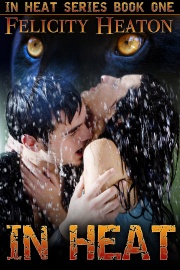 In Heat ~ Book One
By Felicity Heaton

A heat wave isn’t the only thing making London too hot for lawyer Kim. She’s been spending each night with a man who sets her body and heart on fire. The problem? He’s a man that always sprouts black fur and purrs, and he’s only a dream. Walking into work on the hottest day of the year, the last thing she expects is to meet Erik, a man who sends her temperature soaring and who resembles her dream guy exactly.

A black panther shape-shifter, Erik Blackwell has been searching for his mate for twenty-seven years. The visions they share each night are getting hotter but finding her is proving impossible as he’s never seen her face. That is, until it turns out she’s working as his lawyer on his contract negotiations with his brother, Alistair.

Kim can’t deny her attraction to Erik. The heat she feels with him is intense and it’s only a matter of time before they surrender to their carnal desires.

When Kim discovers Erik’s secret, will she turn her back on him, or will she complete the mating and become like him so they can be together forever? 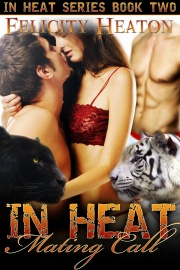 The English winter weather has no chance of cooling Kim down when her dreams of Erik return, and this time they’re hotter than ever! Having spent the past two years waiting to be in heat again so she can mate with her black panther shape-shifter lover, Erik Blackwell, Kim is excited about the prospect that she’s ready at last. But there’s one thing that she isn’t ready for…

The handsome white tiger shape-shifter that walks into their visions and then into their life, declaring himself to be her potential mate too!

Torn between two lovers and unable to stop herself from joining in the carnal pleasures in their visions, will Kim be able to resist the lure of Kristian in real life? Will Erik believe everything that happens or will he see past the lies to the truth and fight for the woman he loves?