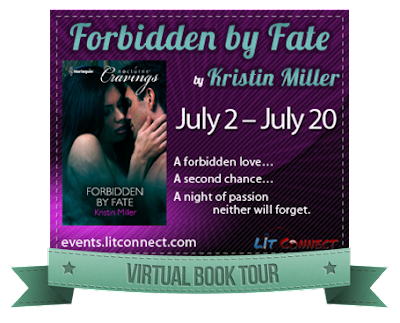 Welcome to my tour stop for Kristin Miller’s new release, Forbidden By Fate. If you’re looking for a short, sexy read with an unlikely paranormal couple…this is it! Kristin is here today to talk to us about forbidden romance (my favorite kind of romance!) so without further ado…

The Allure of Forbidden Romance
By Kristin Miller

Forbidden love is probably one of my favorite tropes to write and read. In my Vampires of Crimson Bay series, each hero is drawn to a heroine they shouldn’t be with. Slade, a shifter, is hot and heavy for a vampire. Ruan, a vampire, is head over heels for a human. Dante, an unknown species, can’t seem to stay away from a vampire elder.

My Isle of Feralon series is no different. In Claimed by Desire, a dragon shifter is madly in love with an empath, a human with no shifter blood. To make matters worse, he is choosing to deny a rider, which will end his life in two days…so that his lover can live without the restraints of his world. (Is there a greater forbidden love than that? Refusing to be with her so that she will live, even as he dies?) In Forbidden by Fate, my newest release, the hero is a dragon shifter and the heroine is heir to the werewolf throne. To be together means defying their families and living on their own, away from either clan. To be together means walking away from everything they’ve ever known.

I’m not sure if I could pinpoint the exact reason why forbidden love is so interesting to read. Maybe it’s because we’re drawn to conflict. What greater conflict could there be than two people fighting against their long-standing beliefs to be together? Maybe it’s because we’re blissfully happy in our own, stable relationships, that reading about striking out with someone we’re *not* supposed to be with is enticing. I enjoy writing about forbidden romances because I like the rub. I like the “we really shouldn’t, but oh, we can’t stop” dynamic. I like writing about the hero and heroine’s inner angst. Most of all, I like writing about the hero and heroine’s choice to traipse the road to love, even though that path is strewn with obstacles.

Why do you think forbidden romances are so alluring?

A night of passion neither will forget.

Sasha, a love-thirsty werewolf and rightful heir to the Were throne, is ready to take control over her pack. But when her first love, dragon shifter Damon Frost, lands on her doorstep, demanding their races negotiate ownership over Feralon’s hot springs, he makes her question more than the fight for the enchanted neutral ground. No matter the emotions bubbling inside her, Sasha can’’t become involved with Damon. Not now. Not ever again.

Forbidden to step foot onto Were land after a romp with the Alpha’’s daughter as a teenager, Damon has bided his time, waiting for the day when he’d be accepted back onto Were land. Using the hot spring negotiation as a way to get closer to Sasha, Damon plans to use every minute alone to remind her of the passion they shared–—a passion they could ignite again.

Will one taste of forbidden love be enough to satiate their desires? Or will the need to explore the depths of their love unleash a Were-Draco war? 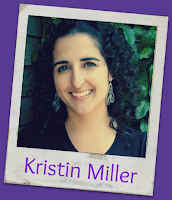 Kristin Miller has had a passion for language and literature her whole life. Born and raised in Small Town USA, she often made up stories about faraway places and edge-of-your-seat adventures.

After graduating from Humboldt State University with a degree in psychology, Kristin realized there is no scarier place than the warped human psyche. Wanting to combine her love of writing with her desire to paint twisted villains, Kristin wound up in the unlikeliest of places—the classroom. She taught high school and middle school English before giving in to the desire to create her own world, where villains can be sympathetic and heroes can be devilishly good.

She is represented by Nalini Akolekar of Spencerhill Associates Ltd. and writes dark paranormal romances and toe curling romantic suspense.

Please leave a comment along with your broken up email addy {i.e. romancingthedarkside at gmail dot com} to enter. Contest is open the duration of the tour (July 2 – 20) and Internationally. Winner will be randomly selected and notified via email.