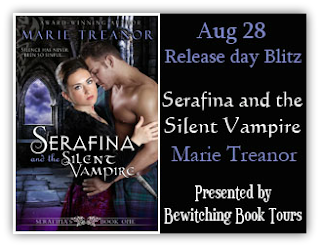 Silence has never been so sinful…

Welcome to Edinburgh’s unique psychic investigation agency, Serafina’s. Serafina MacBride is psychic – but not strictly honest. While staging a hilarious vampire attack at a client’s party, Sera is stunned to encounter a real vampire – annoying, gorgeous and inaudible to everyone but her. When her client’s son is found dead with puncture wounds in his neck, she tracks the silent vampire to his lair.

But the amoral and seductive  Blair is also on a mission – to find and kill a nest of young vampires who’ve invaded his territory. Soon Sera is drawn into the bizarre world of the undead, where danger lurks in the shadows along with forbidden sensual delights – and a murderous conspiracy to flood the world with financially astute vampires who talk.

Supported and hindered by Blair’s eccentric, undead friends, and by her own motley crew from Serafina’s, Sera and Blair uncover surprising truths about each other and about the mysterious Founder from whom all vampires are descended. In the end, Sera draws on powers she never knew she had in a frantic fight to defeat the forces of evil and preserve the strange, complicated being  she’s trying so hard not to love.

An Excerpt from Serafina and the Silent Vampire
{Warning: The following excerpt contains explicit sexual content, graphic language, and situations that some readers may find objectionable. You’ve been warned!}

Although the scary glow didn’t vanish from his eyes, they seemed to soften. His body didn’t. It still pinned her helplessly to the wall. He lifted his hand and touched her cheek, trailing his fingertips down her jaw to her throat. She gasped.

Distracting her from his surprising words, the bulge in his jeans was hardening, both alarming and exciting her. After all, he had the kind of face and body to die for. Sera had no intention of dying.

“Okay, celebrate!” she spat. “You’re stronger than me.”

His lips twitched. “I was thinking of Nicholas Smith. But now you mention it, yes, I am.” His fingers lingered over her vein, stroking. She shivered, trying not to feel the spurt of physical pleasure that was in danger of drowning out her alarm, especially when he swayed his hips in a slow, sensual caress. His erection rubbed against her tummy, and she had an insane urge to stand on tiptoe to feel it grind between her legs. “And, you know, I like that too.”

“Why?” she got out, reaching wildly for the smart comment that somehow eluded her. His fingers slid upward to her face once more, and he traced the outline of her lips. “Because I can kiss you without you feeling the need to stop me.”

She narrowed her eyes threateningly, although her heart seemed to plunge right through her stomach to her womb. “It won’t be the need that’s lacking,” she managed. “But you like the way I look,” he pointed out, pressing gently on her lower lip to part it from the upper. “I’ve read it in your mind.”

“Doesn’t mean I want you slobbering all over me!” Oh Jesus, what would it feel like? “I won’t slobber,” he promised and bent his head.

She couldn’t have avoided it. She refused to dent her dignity further by trying. So she glared into his face, daring him, while her heart thundered in treacherous anticipation. His lips hovered over hers for an instant, just long enough for her to panic that perhaps he was changing his mind and wouldn’t do it, after all. She felt an urge to close the distance herself—only to break the tension, of course. And then he did it, sliding his fingers away from her lips to cup her face and sinking his mouth into hers with blatant, wonderful, terrifying sensuality.

There was none of the buildup she was used to, the gentle brushing of lips, the soft, quick kisses that grew deeper and longer. It was an outright assault on her senses, and it was devastating. His lips were cool and firm as they moved on hers, savoring, almost as if he were drinking from her. Oh shit, don’t think drinking here! He opened her mouth wider for his tongue, which swept around her teeth and curled around her own, drawing it into his mouth. She tried to speak, but the attempt got lost in the shock of his long, sharp teeth under her tongue. Blood drummed in her head, a tattoo of fear all mixed up with wonder and sheer, unadulterated lust.

A weird sound came from her mouth, and he deepened the kiss, almost grinding his mouth into hers, demanding the response she found it impossible not to give. There had never been a kiss like this one, fierce and overwhelmingly sexual, driving all thought from her head but the gratification of desire. She melted into it, opening wide for him, winding her tongue around his, sucking and biting his lips, drawing him deeper in.

At some point, he’d begun to grind his hips too, rubbing himself against her, and she found herself moving with him, standing on tiptoe and pressing back to try to assuage the aching need between her thighs.

When she almost ran out of breath, he broke the kiss and smiled. “Oh yes,” he whispered in her mind. “All night with you. All night and day, and all night again…” His words drove her to fever pitch, eliciting a helpless mewl of desire as she reached for his mouth once more.

He gave it with enthusiasm. His hands were on her hips, stroking down to her thighs and dragging upward inside her jacket and over the sides of her breasts. She moaned into his mouth, felt his thumbs caress her desperate nipples over and over. She wanted them on her naked breasts. She wanted no clothes at all between them. She wanted him buried deep inside her, pounding her to the greatest, sweetest orgasm of her life. More than that, she yearned to blast his control to hell, to make him lose himself in the pleasure she could give him. She was sure no one had ever wanted her this much before.

She squirmed against him, dragging her arms free at last to loop them around his neck and comb her fingers through his soft hair. His hands cupped both her breasts, making her gasp, and swept downward to the fastening of her jeans.

She tore her mouth free to gasp, half laughing, “Oh stop! We can’t! This is a respectable street! People are bound to pass.”

“I don’t care. I want you now. Just for starters. I want to make you scream as you come the first time, see your face in the open air as you fall apart around me. Oh yes.”

She caught his head as he plunged back for her mouth, his fingers determinedly unfastening the buttons of her jeans. “Blair, no!”

He paused and raised his head, his eyes black and clouded with lust. “Admit it. You want me to fuck you.”

She caught the golden flash in his dark eyes, glimpsed the pointed fangs between his parted lips, and swallowed hard. “Does it come with blood drinking?” 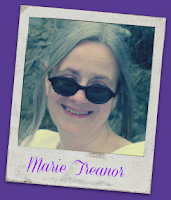 One Response to “Release Day Blitz: Serafina and the Silent Vampire by Marie Treanor”