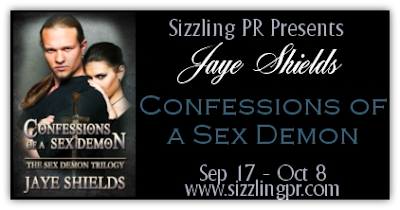 A big welcome to author Jaye Shields who’s currently touring her book Confessions of a Sex Demon via Sizzling PR. Ms. Shields is talking a little about her struggles as a writer, has a sexy excerpt she’s sharing and what better way to end the tour stop than by giving away a copy of her book to a lucky reader!

Writing and Its Struggles…
By Jaye Shields

Recently, I found a runaway blog post from last year and I was a newbie author. I’d just finished my first full-length novel, Secrets of the Fog and began the querying process, seeking an agent. The majority of the blog post was spent griping about those damn automated rejection emails from agents that didn’t even seem like they’d read my query. I was so bummed because I finally finished a novel, and yet, I couldn’t get anyone to read it.

So what’s a struggling writer to do? Join the RWA.

After I signed up with the RWA, I had access to all sorts of resources. I joined up with the online chapter, RWAOL, which features workshops every month, free for members. This was awesome because many chapters charge for membership AND charge for workshops. Eww. That wasn’t going to work for this starving artist.

My advice for new writers is not to give up. After the Sex Demons Trilogy went under contract, my full-length trilogy was not far behind. Secrets of the Jaguar, the very first book I ever wrote, will be available soon in e-format AND print from Crimson Romance. Secrets of the Fog, the first book in the series, will be out Oct. 29th.

Thanks so much for stopping by and sharing in my excitement! And don’t forget, if you’re a writer and ever need a shoulder to cry on, I have a warm shoulder. Wanna celebrate good news? I’m down! Thanks again for having me. Can’t wait to give away a copy to one of the lucky readers!

An Excerpt from Confessions of a Sex Demon

Zahra woke to a sharp pinch against her skin. She tried to peel open her eyelids, but they were heavy stones. She wanted to touch her eyes, but her arms moved nowhere. Fear caused her lids to fly open only to realize that she was indeed strapped down.

The perpetrator smiled, but it was subtle. Very subtle. His tan skin was darker in the dim room. His blue irises appeared so light that his eyes became demonic charcoals glaring at her in the shadowy room. He finished strapping her foot down.

“You should have asked Bane for help decorating. He’s also very good at the dark, gloomy dungeon thing.” She’d hoped to sound feisty, but instead, her voice was nothing more than a pitiful rasp.

“Since you’re used to your mouth being filled, I’ll help you.” Lennox stood over her. She never took her eyes from his intense frown as he tied a scarf around her mouth. He pulled it tight enough to cut into the edges of her mouth. Zahra did her best to smash his fingers into the cold metal table she was strapped to. Unfortunately, the back of her head missed its mark and thunked hard against the steel.

At least she could still see what was taking place. Fear coursed through her. She barely knew this man and she couldn’t imagine what he had in store for her. She was a succubus, used to kinky requests, and most men knew they didn’t need to kidnap her for such a session. She watched Lennox’s tall form cross the mostly empty room. The only furniture was a small table. Probably where he kept his—

Scissors. Lennox turned toward her with a pair in his hand. As he walked in her direction, he looked entirely too innocent to be foreboding. His blond hair was a stark contrast against his tan skin. She’d felt his muscles earlier and they were those of an intense lover, not a fighter. Clearly this guy was tweaked. He was hot as hell and normally she liked freaky guys. If he hadn’t insulted her ever since they first met, they might’ve even had a chance. No charge.

Lennox stood between her legs and she could barely see him from her tight bondage against the table. The cold metal of the scissors slipped under her corset. As the fabric began falling away, the soft groan of the metal cutting through thick black fabric echoed in the empty room. Her tight top became looser with every passing second. Heat crept into her body. Good news: she had the feeling this guy could make her come. Hard. The bad news: she was kidnapped by a psychopath and no one knew where she was.

“Your body betrays you. You crave your abductor, don’t you, succubus?” She avoided his gaze by staring at the ceiling. Zahra could feel the heat from his intense appraisal of her body as he guided the shears across her pants. Apparently, he was leaving no clothes for her to try to escape in. It was becoming clearer by the moment that he had no plans for her to leave. 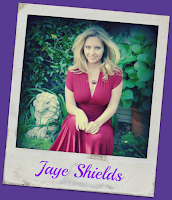 Born and raised in the grunge capitol, she took her love of music and poetry from the Pacific Northwest to California. Now she lives in Alameda, a quaint island town in the Bay Area. With a degree in Anthropology-emphasis in Archaeology, she’s itching to climb some more pyramids. When she’s not writing, she’s either at her day-job or taking long walks along the Alameda beach and gazing at the outline of San Francisco in the distance. Oh yes, and her heart can generally be found in Paris… 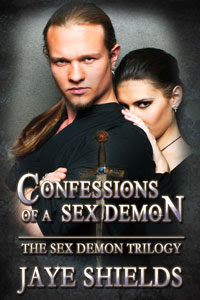 Zahra proves that sex demons do it better as she goes from captive to captivator.

Sex Demon Zahra Aniron is a closet romantic. Too bad she spends her time having hot, kinky sex with paying strangers. But she needs the money to pay off her sister’s debt to wizard thugs. There could be worse things than getting paid for pleasure, especially since a sex demon needs climax to survive.

As a blacksmith, Lennox Aegros puts his fury to good use pounding steel into swords. When he arrives at a new town, his real cause for being there isn’t to sell weaponry, it’s for revenge. When he finds the succubus he’s been searching for, her beauty means he can mix business with pleasure. But the joke’s on Lennox, because as he succeeds in torturing his victim by repeatedly bringing her to the brink of orgasm and then denying her the release that she so desperately needs, he realizes that Zahra’s slow demise means the breaking of a heart he didn’t think he had.

9 Responses to “Blog Tour: Confessions of a Sex Demon by Jaye Shields & Giveaway”