Posted 7 October, 2012 by Lori @ Romancing the Dark Side in Blog Tour, Giveaways / 4 Comments 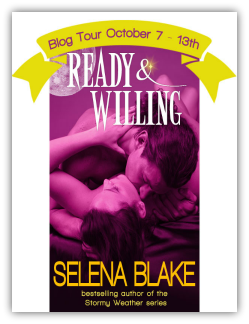 Today I’m hosting a stop on Selena Blake’s blog tour for her latest paranormal release Ready & Willing. There’s a sexy excerpt and a fabulous giveaway in store so stick around and say hello to Selena!

An Excerpt from Ready & Willing

Ava carefully tucked her hand into the crook of his arm, just as they’d practiced the evening before. Only this time she had a smile on her face that made his gut tighten.

It was a show, he was certain of it. His sixth sense could feel the tension radiating through her. She grinned at her parents, made eye contact with a few of the people in the crowd, but she held herself rigid. And her hand barely touched his arm.

Was she still upset because he was determined to take her father’s place?

He’d thought her anger would have diminished by now, but this was just a new facet of her that he needed to learn. It also meant he had to keep his cool…while making her lose hers.

Kaden was ready to be Alpha. He’d been doing battle all his life to become beta of the pack. He’d proven that he was strong, smart, capable, ready and willing to defend the pack. He knew all the pack laws and all the pack members. Yes, his resume was looking stellar.

“You’re not going to be Alpha,” the woman at his side said through her faux smile.

Those warm brown eyes flashed up at him with flecks of golden fire. Why had he never noticed their exquisite color before? They were like cinnamon and amber. “The deal is hardly done. Why would my father hand over the leadership of the pack to an outsider?”
The last word hung in the air between them. Kaden didn’t feel like an outsider. He hadn’t for a long time. WhitePaw was his home. He had friends, a nice house, and a good job in the city. And he was Beta of the pack, a position he took seriously.

“Especially since he has offspring reading and willing to do the job.”

With the processional gathering in the lobby of the church, the photographer began organizing people for the photos. Kaden quickly steered Ava into a nearby room.

He cut off her words. “Ready and willing, huh?”

Ava stared up at the insanely handsome werewolf as her stomach fluttered like a wounded butterfly. Her reaction to him was nothing new. But the intensity of it was.

How did he manage to make three little words sound so naughty? And why couldn’t she seem to remember that he was the enemy?

She couldn’t, wouldn’t, tell him just how ready and willing she was when it came to him. How she’d fantasized about kissing him more often than was decent. Or how she daydreamed of running her fingers through his sexy almost-shoulder-length-but-not-quite golden, brown hair.

No. She could never tell him those things…at least not until she’d secured her spot as Alpha.
“I come from a long line of WhitePaw leaders—“

“What about your brother?”

“Gregory? What about him?”

“You don’t think he’d be interested in the top spot? He is male, after all.”

“That’s irrelevant,” she said as her temper spiked. “I need to get back to the wedding.”

Flustered, she ducked around him. Two steps away from the door, he caught her by the arm and turned her back toward him. Why did those warm, strong fingers on her arm have to feel so good? Inside she whimpered at the delicious touch, brief as it was. And why couldn’t she stop herself from thinking about those same warm, strong fingers sliding up her arm to cup  her head and run through her hair, knocking the bobby pens aside…

“Gregory doesn’t want to lead. Besides, I’m older. And I have more experience.”

“You really think Phillip is going to name someone Alpha who’s experience is organizing parties and Pack meetings?”
Her hand arced through the air before the last word had left his lips. Pride bruised and anger simmering, she saw red. Wanted blood. His blood. But his reflexes were faster and he caught her hand before it connected with his cheek.
Before she could react, he’d backed her up until her back was flat against the door. His big body crowded her, pinned her there as he stared down at her like a wolf who’d just spotted his dinner. With his hand tight around her wrist, holding it beside her head against the polished wood, a mild panic crept through her. She brought her other hand up to push against the solid wall of his chest, needing to get away from him, but he easily caught that one too.

Ava Garnier wants her father’s spot when he retires as Pack Alpha. She may be the middle child but she has what it takes to lead. The only thing standing in her way is Kaden Black, Pack Beta and her long time crush.

Only, she’s not crushing on him anymore. Not since he made it known that he isn’t going let her take over the pack. Neither werewolf will budge, tensions are running high, and they’re both trying to outdo each other.

But the Pack Alpha has already chosen the future path of the pack. And neither Ava or Kaden has a clue to how far they will have go to see their dream come true.