Posted 20 October, 2012 by Lori @ Romancing the Dark Side in Blog Tour, Giveaways / 4 Comments

Today I’m hosting a stop on Patricia K. McCarthy’s blog tour for A Vampire’s Revenge, book five in The Crimson Crimes series, hosted by Shall Write Tours. I’m sharing a really fun interview with one of the characters and a chance to win the books in this entertaining vampire series, I hope you enjoy it!

We are thrilled to spend time with the fearless and outspoken Auntie Aileen, who is understandably troubled by her niece Magdalene, the One and Only Vampire on Earth. It’s fortunate for us that Auntie makes another appearance in The Crimson Crimes: A Vampire Revenge by author Patricia K McCarthy. This is a rare opportunity to experience first-hand her wisdom and sense of humour.

PM: Describe yourself to me.

AA: Good gracious but that’s a stupid question… it’s not even a question, child! But if you must know, child, I haven’t got the time or patience for fooling around. Now for sure I’ve been known to imbibe the odd nip or twenty… seems to me you might as well enjoy life. Soon enough you’ll be pushing up the daisies and no one will bother to wink one false eye if you raised your skirt to show off your knickers. That’s been my philosophy. I never planned on living with the likes of vampires, for the love of all Creation. But I’m Magdalene’s aunt and I love her to smithereens. She’s got a heart of gold, even if her loins are devilishly wicked.

PM: If you were granted three wishes, what would you ask for?

AA: What a joy it would be to see my late husband Quinn again. I’d give him a good piece of my mind for being such a clunk-head idiot when he was alive, the bloody fool. Second wish would be to find out where I dropped those blasted set of house keys back in ’45. Never did know what happened to them. It was New Years Eve, you see, and Quinn and I danced up a storm. Good gracious but that man had energy to spare. The keys must have slipped out of my pocket and hid under the table. After the night was done, I couldn’t get back into the house. Nearly froze to death on the doorstep. Third wish would be to do it all over again.

PM: How do you fall in love? At first sight? Over a long period?

AA: My love life is none of your business, child. Is this the kind of cockamamie example you set? But if you must know, child, my niece Magdalene is love sick mad over that hybrid vampire husband of hers, Samuel. I swear the two of them would follow each other into the bowels of hell. To be sure, there’s going to be trouble at the end of their vampire story, I just know it. You can’t love a vampire without sacrificing your soul. And for the love of God, why would anyone ask such a stupid question? Love goes according to its own course, child. It’s like that baritone crooner Leonard Cohen says, “Love seizes you.” That’s about the size of it.

PM: How do you decide if you can trust someone?

AA: I usually give them a good cuff on the back of the head and tell them to smarten up. People are weak, child, and they haven’t a clue how to behave like decent, church-raised human beings. They all want everything for nothing and don’t want to be told what to do or why to do it and they especially don’t want to explain themselves to no one. Trust comes with age, I suppose, when all you’ve got left is your false teeth and some misguided notions. You might as well give trust one last chance. Money goes and love fades but at least trust endures if the spirit is willing.

PM: What really moves you, or touches you to the soul?

AA: A good laugh that reaches down my throat when I least expect it and a dollop of rum in my cup of tea, any time of day, you see… many a time I fretted over the whereabouts of my husband Quinn when he was off gallivanting on the boat. The rum eased my nerves and dulled my thinking. People think too much, child. It’s a recipe for trouble, that’s for sure. Now reading is a worthwhile pastime. You don’t have to listen to some idiot jabbering in your ear the whole day long… it’s just you and the pages. I love it when a book kicks me in the… oops.

PM: What do you consider your special talent?

AA: Or, what do you wish your special talent was? Well now that’s a question worth asking and answering. I used to play piano for the silent pictures, those were the days. We could smoke indoors ‘til our fingers turned yellow and didn’t have to worry about the evils of marketing. I loved puffing all night long and not so much as one ball of mucus would be brought up. Gave up all that stuff, you know. My fingers are crooked now so there’s no more piano playing and my lungs are about ready to collapse. But at least my lips still work and my pouring arm is strong. Suppose that’s better than nothing.

AA: Got married and then had the foolish idea to give birth to eight children, all of them as hopeless as weak umbrellas in a fierce wind. You see God fools us with love, child. It’s how he tricks us into thinking that loving a man will make us happy. I never met a woman who could keep that dream alive after marriage. A woman has got to have her own passions. That’s my best piece of advice. You know what happens to a woman when she lives with a man? I tell you what happens… her workload doubles!

PM: Do you care what others think of you?

AA: Never have, never will. If you worry too much about what others think or say about you, you might as well stick your head in the toilet for a good soaking until some sense comes back into your fool brain. Life is short, child. One day I was thirteen years old with a full head of wild, red hair and now I’m into my late seventies with barely a few strands left to comb over. I feel smarter and just as young in the mind but my body has other ideas. You’ll know what I mean, child, soon enough. Time waits for no one.

PM: How do you want to die?

AA: I’m about to lose the last of my patience with questions as silly as these but if you must know, child, I’d prefer to go in my sleep with my husband Quinn chasing me down the street. You see, child, women love the chase and that’s what happens in the Crimson vampire novels – Samuel and Magdalene chase this foolish illusion that they’ll be able to lead normal lives as vampires with their wee tot Finn. And those clunk-head idiot Irish brothers, the Coffey boys, and that photo boy David Three Rats will either end up in prison or on the six o’clock news. We haven’t heard from Samuel and I fear the worst for him and for my girl, Magdalene. He’s stuck in that old prison in Ottawa and I can’t for the life of me figure out how the Coffey boys and Mister Three Rats are going to stage an escape. Suppose I spilled the beans, eh?

PM: Do you believe in the afterlife?

AA: Well, child, it’s certainly a better option than believing in the opposite that we’re all doomed to the fires of Hell, wouldn’t ya think? I’ve stopped trying to tell people what to think… it’s their business if they want to be idiots. Let them steer their own course they’ll still have to answer for what they did in the end. I never took the life of anyone but I have given more than my fair share of cuffs across the head. Young boys and girls can be as dumb as posts and you’ve got to smarten them up before they get too big to fight back. I suppose I could have and should have drowned every one of them ankle-biters I gave birth to but babies are such cute little rug-rats, aren’t they now, child? Vampires on the other hand have nothing cute about them, unless you’re hopelessly in love with them and we all know that love is a Godless place whenever there’s wicked sex involved – sex is the work of the devil, to be sure.

PM: When have you been happiest in your life?

AA: I’m worn out from these questions, child. Every day in every way I’ve been happy, so long as I’ve got a wee dram of rum in my cup of tea… course when Quinn was alive that boy could make me laugh until the pee slipped out of me and I couldn’t stop myself, had to change my under garments afterward, but don’t breathe of a word of that to anyone. Happiness is a state of mind child and never forget that nobody’s happier than a fool.

THE CRIMSON CRIMES
(A VAMPIRE REVENGE)
BY PATRICIA K. MCCARTHY 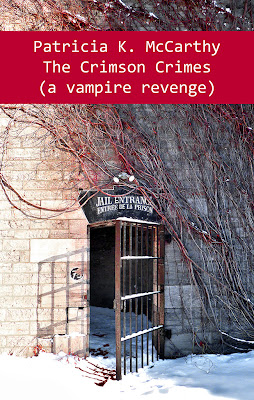 It’s the dead of night in the dead of winter, and bodies have been found, stacked ceiling-high, in a hillside cave in Ottawa’s Strathcona Park; necks pierced, blood drained – the usual. The city is gripped by a dusk-till-dawn curfew. The press, police and public have whipped each other into a glorious panic over someone or something called the “Vampire Undertaker.” Well, when did a silly curfew ever shut down the kitchen party at the Crimson house?

Bring beer, bring smokes, but please bring yourself to meet The Vampires (there are at least four of them) and their quirky human pals. We can take turns feeding the baby vampire, stalling the cops when they come knocking, and tripping out on that time-dream machine up in the bedroom. You’ve got to love people who know how to make their own fun! You’ll never know where Patricia K McCarthy’s “Crimson” stories will take you or guess what’s going to happen next, not that you’ll be complaining! Oh, and of course this novel is well-seasoned with smutty bits – every good plot deserves pepper. 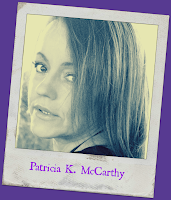 Patricia K. McCarthy lives and writes in Ottawa, Ontario, Canada. Her Crimson vampires series has received extensive media coverage in national and local newspapers, as well as on radio and television. 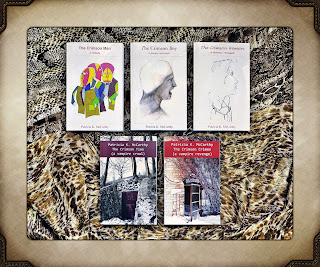