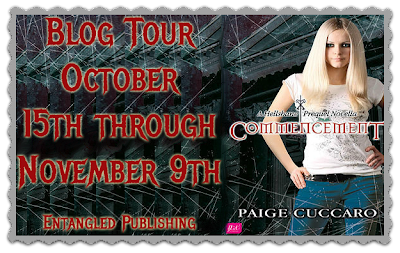 Welcome to my stop on the Commencement Blog Tour. Author Paige Cuccaro is celebrating the release of her latest addition to the Hellsbane series and I had the honor of chatting with her (which was a blast), and am delighted to share our interview with you today. There’s lots to cover so I won’t keep you waiting…oh and there’s also a fabulous giveaway for those that stick around to the end;)

RtDS: Welcome to Romancing the Darkside Paige, I’m a total fan of your heroine Emma Jane Hellsbane and I’m super excited to have you on the blog today to discuss your latest release in the series, Commencement.

RtDS: Give us three (3) interesting facts about yourself that may surprise your readers.

I’m a nerd/geek groupie. I was always more eager to be accepted by the smart kids talking about SciFi books and movies, world politics and theories about the universe than the “cool” kids talking about football games, dating and what party they were gonna get wasted at the next weekend.

I’m a pessimist who wishes she was an optimist… but what’s the point?

RtDS: In my review of Hellsbane, I referred to your heroine Emma Jane as “Buffy the Vampire Slayer’s counterpart minus the vampires” which in my book is a total compliment. How would you describe Emma Jane to readers?

PC: OMG, that was the best compliment EVER!!! Thank you!!!! LOL Joss Whedon is my hero. I think Buffy- esque is a great way to describe her. In her head, Emma is just a normal girl. Well, y’know, except for the weird ability to feel other people’s emotions. She’s never seen herself as the hero type, but if the people she loves need her, she’s there for them. She’s also not the type to just stand by while bullies pick on the weak and innocent. So if someone (i.e. fallen angle or one of their creepy demon minions) picks a fight, Emma often finds herself stepping up before her brain—and self preservation instinct—can talk her out of it.

RtDS: The Hellsbane series features, Angels, Demons and Nephilim, all very popular supernatural beings in literature. Was there any research involved in creating your supernatural world?

PC: As a kid my mom made us all go to church and Sunday school and I learned about angels. So I guess my fascination started way back then. When they glossed over the part about nephilim—the children of angel and humans who were born as giants, I perked up. The bible doesn’t go into too much detail about them though. So when I was older and discovered The Book of Enoch, I was hooked.

Most of my research has been to satisfy my own curiosity. The more I learned the more the different stories began to spin and come together in my mind. The fact that the existence of these people (half angel-half human) was actually mentioned in the bible, and then written about in great detail by one of the contributors (The vast majority of Enoch’s work was discarded from the final version of the bible) only made the possibilities all the more intriguing. I’ve spent years researching nephilim and the angelic wars finding obscure mentions in countless books and testaments that all link together in startling ways.

RtDS: Commencement gives us a glimpse of our heroine as a young college woman, where Hellsbane shows us a more mature Emma Jane. Which version of the character did you find easier to write/develop?

PC: Forcing Emma to continue to grow—and grow up—from one book to the next is the most difficult. In my head I see her as I first met her—this quirky happy young woman who’s thrust into a world she didn’t know existed. It changes everything, not just her daily life, but who she thought she was. So I guess later versions of Emma are harder, trying to keep her core personality the same after everything she’s gone through. Commencement was a total blast to write all the way around. Definitely the easiest version of Emma.

RtDS: Every good book has an evil villain. Describe the “bad guy” in Commencement for us in under 140 characters.

PC: An all powerful, egomaniacal, preternatural who’s spent the past hundred years trapped, forced to do the bidding of creatures he sees as food. (142…is that okay?)

RtDS: Your writing style blends the dark side of urban fantasy with great humor, do you see yourself in any of your characters?

PC: I think there’s a part of me in every character—even the evil ones. I like to believe there’s more of me in Emma Jane than in the baddie she has to fight in Commencement, but…y’know…I have my days.

RtDS: If Commencement or the Hellsbane series were ever made into a film or tv show, who would your dream cast be? Any nightmare cast?

And…y’know, if we’re gonna play let’s make a movie, might as well cast the novel. 😀

I mean, that’s off the top of my head. Not like I’ve spent a ton of time thinking about it. *giggle*

RtDS: Who are your go to authors when you want to escape in a book?

You’re stranded on a deserted island and can pick one book and one person to spend the time with. Which book do you choose and who would you want for company?Interview with a vampire and my husband.

RtDS: Paige, it was a joy having you here today with us…feel free to come back anytime!

PC: Thank you so much for having me, Lori! I really enjoyed answering your questions! This was a lot of fun!! 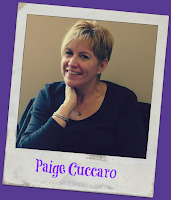 Writing was never a foregone conclusion for me. I once had dreams of being a psychologist, a pediatrician, a school teacher, a photojournalist, a bartender, and/or an EMT. And then I met my husband and my world came into focus. Being wife and mother are my highest priorities and greatest joy. But escaping to the fanciful, sexy worlds twirling through my mind is an absolute necessity. Putting those worlds, and the cornucopia of characters that people them, on paper is just plain fun.

Paige lives in Ohio, with her husband, three daughters, three dogs, three cats, a parakeet and a bearded dragon named Rexy, in an ever shrinking house. When she’s not writing she can be found doing the mom thing with a book in one hand and a notepad and pen in the other. Ideas come without warning and the best way to stimulate your imagination is to enjoy the imagination of someone else.

One ecopy of Commencement by Paige Cuccaro 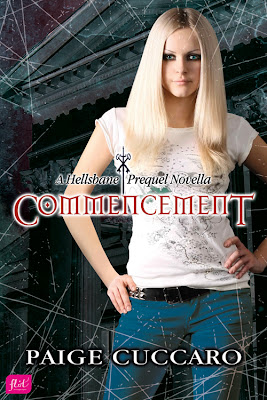 Emma Jane Hellsbane knows something evil is worming its way through her college campus—she can feel it. Literally. Her freakish ability to feel other people’s emotions as though they were her own has always been monumentally awkward, and it’s easier for her to just pretend it doesn’t exist. But this time her paranormal ability just might help her save lives.

Emma Jane’s fairly certain that whatever the hateful, egomaniacal, Godlike thing is, it’s set up shop inside her boyfriend, the frat boy/soccer star Justin. And if she doesn’t figure a way to get it out of him soon, Justin’s soul will be the appetizer to the main course—the whole student body. Problem is, the big baddy is granting sinister wishes, and with each one the risks grow higher and the phrase Be careful what you wish for becomes a real-life dire warning. Of course for Emma, what feels like it could be the end is in fact just the beginning…