Posted 23 January, 2013 by Lori @ Romancing the Dark Side in Book Spotlight, Giveaways / 1 Comment At the beginning of this second installment in the Angels of the Night series, we are thrust into Allison’s heart pounding nightmare in which Darcy has become intensely involved with a female vampire. These images haunt Allison so powerfully she believes he no longer loves her and is even more determined to bring him home.

Together with the Darcy’s triplet Robert, a dark vampire whose intentions are not entirely clear, and Thomas MacGregor, Allison’s faithful guardian friend, Allison leaves her hometown to find Darcy and bring him back. An unexpected problem has surfaced, however, and a desperate plan is put in place. Allison must make the ultimate sacrifice to save Darcy but soon realizes this is only the beginning of her struggle. Her entire world is about to be shaken to the core by a coven of female vampires and Allison must put her faith, and her heart, in the hands of the one she fears most.

Read my review of the first book in the series: Angels of the Night: DISCOVERY

I couldn’t take my eyes off him as we moved to the rhythm of the music. Here we were together again, finally. Despite all the obstacles, despite all the shit, we’d made it. His deep brown eyes scanned my face and it felt as though I could fall into them. I hadn’t been this close to him for months and my heart hammered. Thomas was around somewhere but what could he do in front of all these people? I never wanted to leave, never wanted to be out of his arms.

We stayed like this for the next hour or more, despite the barrage of dance songs that pounded the walls, until another slow song started. Darcy was just wrapping his arm more tightly around my waist when Max appeared beside us.

I was impressed that Max was trying to be friendly and couldn’t help the grin on the corners of my lips.

Darcy nodded stiffly but seemed to have a hard time looking Max in the face. I could feel the muscles in his arm flexing and rubbed them with the palm of my hand hoping the motion would be relaxing. “Hey,” he said stiffly.

Max nodded toward me but yelled at Darcy. “Can I dance with her?”

Darcy’s eyes narrowed to slits and he glared down at Max. “What do you think?”

Max adjusted his tie and smoothed the sides of hair. “I don’t think there’s anything wrong with me dancing with her once.” He glanced over at me. “We’ve been friends since we were kids. Come on, Allison.” 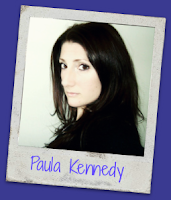 Born and raised in Sault Ste. Marie Ontario, Paula has a B.A. in psychology, a B. Ed. in the primary, junior, intermediate and senior divisions, and a vivid imagination. She spent her early years listening to the stories of her father, a well-loved high school teacher and creating tales of adventure for her two younger sisters.

She is a wife and mother to three beautiful children.

“I am a mother, a wife, a teacher and a writer. Life does not get any better than this!”

Giveaway provided by author
One ecopy of Angels of the Night: DIVINITY by Paula Kennedy
Enter via widget below
a Rafflecopter giveaway

One Response to “Angels of the Night: DIVINITY by Paula Kennedy {Book Spotlight & Giveaway}”