This month’s selection is A Blood Seduction by Pamela Palmer and is hosted by Laura @ Little Read Riding Hood. Her cocktail of choice: Chick Beer…how fabulous is that name, right?

Be sure to stop by Laura’s blog for her thoughts and discussion on A Blood Seduction. 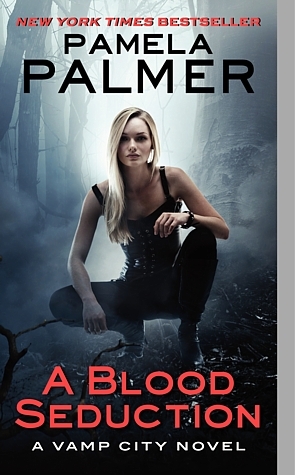 Take me down to Vampire City...

Vampires live only for lust and pleasure in the eternal twilight of Vamp City. But the city's magic is dying. The only person who can restore it? A beautiful woman from the mortal world...one who knows nothing of the power she wields.

Quinn Lennox is searching for a missing friend when she stumbles into a dark otherworld that only she can see—and finds herself at the mercy of Arturo Mazza, a dangerously handsome vampire whose wicked kiss will save her, enslave her, bewitch her, and betray her.

What Arturo can't do is forget about her—any more than Quinn can control her own feelings for him. Neither one can let desire get in the way of their mission—his to save his people, hers to save herself. But there is no escape from desire in a city built for seduction, where passion flows hot and blood-red.

A dark and twisted vampire Alice in Wonderland!

Quinn Lennox has always known she a little different but nothing could prepare her for the world she encounters when a friend goes missing. One wrong move thrusts Quinn and her brother Zack into an alternate world run by vampires and magic known as Vamp City. Trapped in a dangerous world where humans are used as slaves and food, Quinn is held captive as by the charming Arturo, a vampire who insists he’s her master and she his slave. To find her brother and get back to her world, Quinn will risk everything and soon finds herself trusting the man she should fear.

The dark and cruel paranormal world depicted in A BLOOD SEDUCTION is in my opinion the star of the book. These are not the handsome and sensual vampire heroes we love in paranormal romance, these vampires are blood thirsty, vicious and heartless…feeding off of blood, fear and even pain. This world is protected by a magical veil that has been pierced and can only be repaired by a powerful sorcerer or in this case, sorceress. When word that Quinn possesses this magic gets around Vamp City, she becomes  a valuable asset and her goal of escaping becomes almost impossible.

“If only she had a guide. Alice had had the white rabbit. Lucy, Mr. Tummus. Dorothy hit the jackpot with the scarecrow, tin man, and cowardly lion. Quinn wasn’t picky. Even a talking pigeon would do.”

Quinn is not your usual kick butt heroine but you have to admire her devotion to her younger brother Zack. While I can understand her loyalty it was hard for me to connect with her, as much as I wanted to.  That being said, I think her heart is in the right place and she has potential to be a great heroine as the series develops. The relationship between Quinn and Arturo would definitely be labeled “it’s complicated” on Facebook…LOL There’s plenty of sexual tension between them but you’re never sure where Arturo’s loyalties lie which makes trusting him difficult. Artuto is far from a hero and while I’m still not sure if he truly is a bad guy, his charm is undeniable. I look forward to what the author has in store for them in the future.

“Is this my magic?” “I do not know.” He frowned, his fingers running through her hair. “I wish you had no magic.” “Why?” “Because then I could keep you for my own.”

The story ends abruptly, with plenty of unanswered questions that I’m hoping will be addressed in the next installment. While this book may be a little violent and lacking in the romance department, the world building is strong enough to keep you interested. If you like to venture into the dark side of vampires or looking for a change in urban fantasy, A BLOOD SEDUCTION is sure to deliver.

I hope you join us for next month’s discussion!