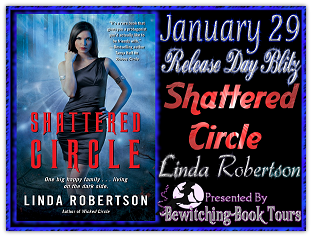 I’d like to wish a Happy Book Birthday to Linda Robertson’s Shattered Circle today! Linda and Bewitching Book Tours are celebrating this release by sharing some excerpts and an awesome tour-wide giveaway. I hope you’ll join us in the celebration! 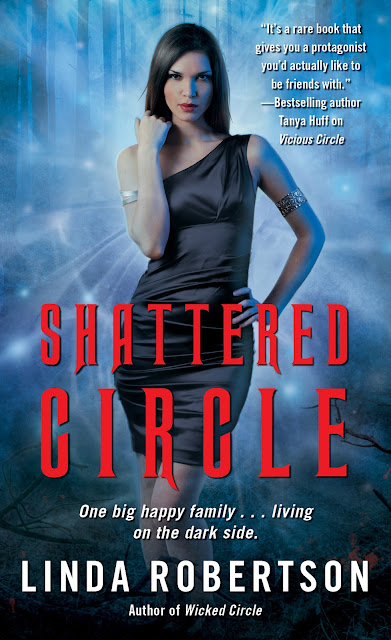 It’s tough being a modern woman, but Persephone Alcmedi has it worse than most. Being the prophesied Lustrata has kicked her career as a witch into high gear, and juggling a wærewolf boyfriend who is about to become king of his kind and a seductive vampire who bears her magical Mark isn’t easy either.

Still, Seph’s beloved foster daughter, Beverley, is causing more trouble than these two men put together. The young girl’s been playing with a magical artifact that’s far more dangerous than she realizes. Now Seph must summon help from a mystical being so potent that even vampires fear him . . . and the cost of his aid may be more than she’s willing to pay. Seph, Johnny, and Menessos face threats from all sides—and a few from within. Will the forces of destiny cement their tenuous supernatural union, or shatter it forever?

Liyliy, a vampire-harpy, had tried to kill me a few hours ago, and the struggle left me exhausted and sore. That was the reason I was still abed at nearly two in the afternoon. When my satellite phone blared the opening riffs of Ozzy Osbourne’s “Bark at the Moon,” it startled me, instantly reminding me about all the sore muscles I had.

Mid-reach, I stopped. That was Johnny’s ringtone.

He had tried to kill me, too.

My hand shook as my finger jabbed the Answer button.

I sat up and deliberated whether to play deaf and repeat my “hello” as if I hadn’t heard him. I considered being a jerk and hanging up. I even contemplated ripping him a new one.

Instead, I remained silent.

Two days before, minutes after I’d performed the forced-change spell on him and his loyal pack mates, Johnny had attacked me. He’d always retained his manmind while transformed, but that last time he didn’t—he’d been pure animal. The only reason I was still among the living was because I’d pumped ley line energy into him like a human Taser.

He’d frightened me to my core. The unshakeable faith I’d had in him had been shattered by an emotional earthquake. Damage was done. My fear felt like betrayal.

Could going through the forced-change spell repeatedly have an undesired effect?

No. I was sure the whole terrible incident could be pinned on the fact that my mother, Eris, had revoked the tattooed bindings she’d placed upon Johnny eight years ago. He suddenly had access to all the power and potential she’d locked away from him. That was surely a disorienting, difficult situation.

I’d helped him dig up the clues, helped him achieve that goal. Hell, I’d even been a part of the reversal spell. So some responsibility for the consequences was mine to bear.

He rarely used my full given name; he usually called me Red, as in Little Red Riding Hood to his Big Bad Wolf. Or Seph like nearly everyone else. I had to respond.

Pushing back the covers, I stood and began to pace. “I don’t know what to say.”

He paused. “Can you forgive me?”

Part of me said I couldn’t allow his attack to be a personal issue because of the fateful trio that Johnny, Menessos, and I forged by binding ourselves magically. The other part argued that no matter the circumstances, attempted murder was very damn personal.

It all happened because Johnny had surrendered to his destiny. His unique ability to transform at will made him the Domn Lup—king of the wærewolves. It was a position with power, prestige, and perks such as a Maserati Quattroporte. Johnny knew his royal place was unavoidable, but he’d fought it and hid from it a long time. He’d finally pushed forward because it was beneficial to our triple union, but kinghood was costing him his dream of being a rock star.

It had been my fear that he’d lose who he was in the course of this alliance of ours. More than ever, it seemed this fear was being borne out.

On the other corner of our triangle was Menessos. He now bore two witches marks—mine, of course. That made him my servant. When Heldridge, his former right-hand man, learned of my authority over Menessos, he tattled to the highest vampire authority, the Excelsior. To protect us against the personal grudge of the truthseeing vampire-harpies sent by VEIN to make formal inquiry, Menessos had allied himself at great personal expense with someone dangerous—a “nameless” guy I had aptly dubbed Creepy.

The secrets he’d wanted to hide from VEIN—secrets even I didn’t know—were apparently safe, but our little who-marked-whom secret was out. Menessos lost his haven and his status as Northeastern Quarterlord. Johnny had accepted great power and lost a lifelong dream. Menessos had lost great power and accepted serious personal risk. It didn’t seem fair.

And what about me?

In the last several weeks I’d learned that I was the longprophesied Lustrata, the Witches’ Messiah, She Who Walks Between Worlds, She Who Will Bring Balance, blah blah blah. As this news spread throughout the nonhuman communities, some scoffed and some believed. I was fine with the scoffers; it was the believers who were dangerous. They wanted to know if I truly possessed the power that accompanied those titles. Yeah, I was a magnet for nasties who either a) wanted me dead to be sure I didn’t have that power, or b) wanted to try to force me to wield power for their gain.

I guess I’d accepted the endless complications of my status and was well on my way to losing all scraps of naïveté.

At that thought, I stopped pacing. As I stared into the nothingness of a darkened corner, it felt like my innocence had slipped from my grasp and I was watching it skitter across the floor, waiting for it to come to a stop so I could reclaim it.

I wasn’t sure it was worth the effort to look for it. Or perhaps it would be impossible to find if I made the effort. Maybe it had rolled into some crack, never to be seen again.

I heard Johnny breathing through the phone.

It wasn’t Johnny who had rescued me last night.

When I defeated Liyliy, Menessos had been there to bring me to the haven. Sure, Menessos had a hand in creating the monster she now was. And it was he who had imprisoned her, creating her need for revenge. But it was me and my marks upon him that had brought her to Cleveland. When she pursued me from the haven—according to the Offerling I’d spoken to—Menessos had sent everyone out to search for me.

Had Johnny even known I was missing?

It was shitty of me to compare the two men in my life, but I couldn’t help myself. Though Menessos had drunk my blood numerous times, he hadn’t tried to kill me.

Yes he did! He nearly killed you not long after you first met.

We were strangers then, I argued with myself. Now, we know each other well.

Defiantly, I ignored my conscience’s scolding. I will not regret what I did last night. During the predawn hours, reeling from my encounter, I’d kissed Menessos.

Fine, but clearly you were able to forgive him.

That was true. Considering this, I felt hope. I sighed heavily into the phone. My whispered answer was, “In time.”

“There’s so much I need to tell you.” Johnny’s voice was raw, and the rev of an engine punctuated his words. I wondered where he was going. And I wondered if I should tell him about kissing the vampire.

It hadn’t been a peck.

When our lips had touched, I felt the promise and power of a more intimate union. He’d definitely felt it. It wasn’t only the power of the marks between us that had been kindled.

“I don’t know where to begin,” Johnny said.

His voice drew me out from my memory of a passionate moment with another man. Guilt swelled around my heart . . . but not remorse. What am I going to do? 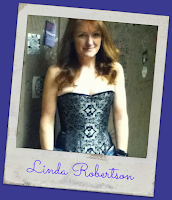 Linda Robertson is the mother of four wonderful boys, owns three electric guitars, and is followed around by a big dog named after Bela Lugosi. Once upon a time she was a lead guitarist in a heavy metal cover band and has worked as a graphic artist. She still composes and creates art, when time permits. Linda currently writes and rocks in northeast Ohio. Visit her at AuthorLindaRobertson.com and @authorLinda