I would like to thank Lori for hosting me and allowing me to share my books with fellow lovers of paranormal romance. Today, I’m going to introduce the leading men of my Rulers of Darkness series.

They are all tall, powerful, sexy vampires.

Let’s start off with Dorian Vlakhos from Caressed by Moonlight. 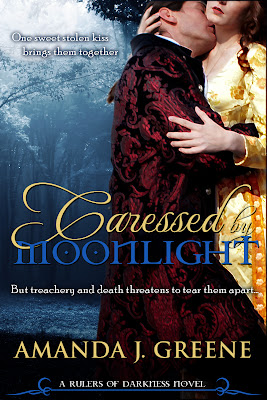 “It isn’t as clear as the country.”

“The sky. It is clearer in the country,” Victoria said as she stepped from the shadows of the trees.

The man turned to face her and she gasped as if she had been struck. He was tall, taller than any man she had ever seen, muscled and thick. Strands of deep brown hair fell across his angelic yet masculine face, her fingers twitched with the desire to brush them away from his magnificent eyes. Those fathoms of blue were like the sea after a tremendous storm, piercing, penetrating, and exotic. His jaw was straight and square, his lips thin and alluring. He was absolutely beautiful, in a dangerous, very masculine way.

“Yes.” Dorian’s delicious lips turned up in a smile.

His husky voice moved over her skin like a caress, her entire body was aflame as his smoldering gaze that roamed over her, leaving nothing untouched.

Next is the stunning Dimitri Arsov, the last remaining original vampire from Caressed by Night. 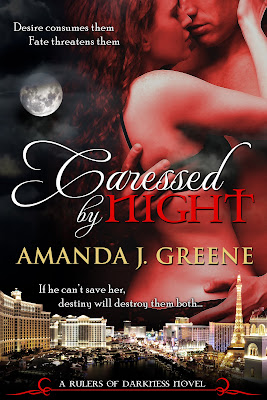 “Do you need help with anything?”

His last question snapped her back into action. She stepped back, breaking the circle of his arms.

“A simple enough task,” he said with a shrug.

She scoffed. If it were simple, she would have been half way home by now. She turned her head up intending to face him and a broad chest greeted her eyes. She was forced to take another step back in order to get a proper look at him.

He was huge. Thick. Stacked.

He must be close to seven feet, she thought as her eyes traveled up his torso, over his wide chest, to his face.

Her heart stopped when their eyes met. They were a near colorless shade of blue. Like diamonds. His gaze was sharp, hard, filled with wisdom and strength. Intense. Warrior eyes. Yet, he could not be much older than her, around twenty-six. His golden hair glittered from the light of the neon signs and floated about his shoulders. His face was chiseled and impossibly perfect. His lips were full and Kerstyn wanted nothing more than to feel them against hers. Her eyes traveled back down his hard, honed body.

She stood, rooted to the cement, captivated by the Norse god before her.

Dimitri forced himself to remain still while she studied him. Again, he struggled against his urges, his heart thundering from the force of the shock of desire that still echoed in his mind.

My recent release, Caressed by a Crimson Moon, brings a new hero into the Rulers of Darkness series, Hadrian Lucretius. He is brooding with haunted obsidian eyes. 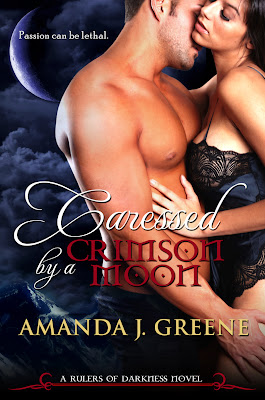 She was not alone.

Eva froze and strained her senses. Her hearing and eyesight was slightly better than a human’s but nothing compared to a full shifter or—she swallowed hard—a vampire. Unable to detect anything, she slowly crept forward. Placing her back against the twelve-foot tall hedge wall, she peeked around the corner.

A man sat on a white marble bench, his elbows resting on his knees, his head hung low. She could only see his perfectly hard profile and her heart skipped a beat as her breath caught. High, bold cheekbones and a straight, stern jaw descended to thin, yet enticing lips. His hair was black and buzzed in an extremely short military fashion. To her disappointment, his eyes were closed, but she knew they would be intense. He was dressed in all black, a stark contrast to the white that surrounded him.

Raw power radiated from him. He was pure unadulterated male. Lethal. She knew instinctively that this vampire was the crazed king, Hadrian Lucretius. The man—no, the beast that had ensnared her in the hall.

His eyes remained closed as his lips pulled back from his long, white fangs tinted with red.

She knew she ought to be horrified but as before…he was making her lust. Her body was hot and heavy, her breathing came in soft gasps, and heat spiraled through her core as she recalled the feel of his powerful body looming over her.

“I know you’re there.” His voice was deep and heavily accented though his style of speech was modern. He spoke again, but she did not comprehend his words. She closed her eyes and savored his voice. Dark. Seductive. She shivered, not from cold, but from pleasure.

I hope you all enjoyed meeting the Rulers of Darkness.  I also want to add that Caressed by Moonlight (Rulers of Darkness #1) is currently free on All Romance eBooks. Download it now through the end of March!

Thanks again having me here today and I wish you all happy reading!

Get your free copy of Caressed by Moonlight here: 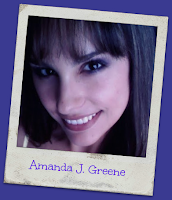 She lives in Southern California with her very supportive, military husband and their sweet cocker spaniel. 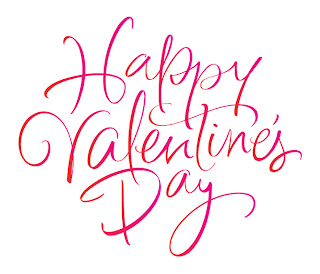 One Response to “Guest Post: Meet the Heroes of the RULERS OF DARKNESS series by Amanda J. Greene”