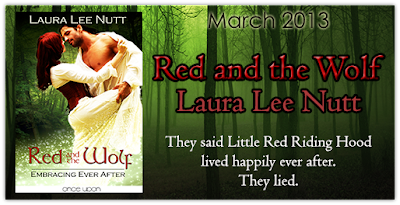 Welcome to my stop on the Red and the Wolf Blog Tour! Author Laura Lee Nutt is sharing a little of her writing process and also has a fabulous tour wide giveaway you don’t want to miss. Now, let’s get on to the good stuff…

Writing the Wolf Within
By Laura Lee Nutt

One of the challenges with writing any werewolf story, such as my new release, Red and the Wolf, is how to write the lupine aspects of characters cursed with lycanthropy and how to do it believably.

To complicate this issue, there are more werewolf varieties from a vast collection of legends, both old and modern, to choose from. Or do you come up with your own variety? One of my favorite book series, Jim Butcher’s Dresden Files, uses four types of werewolves (and one wolfwere). Whether Mr. Butcher could not contentedly narrow the choices down, a struggle I wholly sympathize with, or he was fascinated with how different werewolf types would interact in the same world, in the space of one book he represents a small example of the range lycanthropy can take. Whether slipping on a wolf’s skin to magically bring on the transformation or getting bitten, the choices are vast, and this is even before you decide how much of the monster should reside in the spirit of your werewolf. Who should be in charge and how much of the time, the man or the beast?

Since I have always found the internal struggle between man and beast fascinating, I chose a werewolf type for Red and the Wolf that would easily let me explore such a battle. For my werewolves, the wolf is literally a separate spirit that grafts itself onto the human soul until the two are no longer completely indistinguishable. A battle for control and dominance is always a potential threat, especially when the character is in wolf form.

Then, whatever type of werewolf you choose or create, how do you breathe believability into the fantasy? To begin with, I researched wolves and took copious notes on their behavior. It helped that I have owned dogs for most of my life and was already familiar with certain canine tendencies. Then I focused on the character and the internal struggles and challenges of having a part of the self that had been taken over by something inhuman. This actually resulted in a lot of fun as, for example, Heinrich the huntsman frequently argues with his wolf. For this, I pulled a great deal on my experiences with my own dogs who, in their own way, frequently shared their opinions of me and life, usually in regards to food. Keeping the focus on the character and using inspiration for real life helps a great deal in increasing the believability factor.

However, part of the beauty of werewolves is how they straddle the divide between civilization and the wild, heroism and monstrosity. To me, the most interesting lupine characters face the challenge of striding that divide. So for Red and the Wolf, I got to find ways to blend heroism with horror in the same character. The result was lots of fun to write. While my werewolves may crave human flesh more than any other food (the horror), they work tirelessly to counteract the urge to consume it (the hero). While Heinrich’s wolf form would terrify the heroine, Blanchette, as she is still emotionally scarred from the werewolf attack in her grandmother’s cottage years before (the horror), he works tirelessly to protect her from all threats (the hero).

Yet the challenge of writing wolf versus man extended further. As Red and the Wolf was intended from the beginning to be primarily a romance, I had to give the courtship a good amount of consideration. First I researched wolf mating and courtship rituals. There is a lot of play involved as well as bonding. That worked perfectly for my purposes, so I had Heinrich court Blanchette as both a man and a wolf until the moment he becomes indistinguishable in her eyes. Quite a challenge for him as she is terrified of wolves. This naturally also opened up a great way for Blanchette to then overcome her fears.

Whatever type of werewolf a writer decides to use in a story, as long as it is given good consideration and tied to the character, an endless spectrum of interesting possibilities awaits. The range and the carnal power of the werewolf in fiction, a beast that straddles our world and the primal wild, I think, is what makes this type of character popular and gives it such longevity. 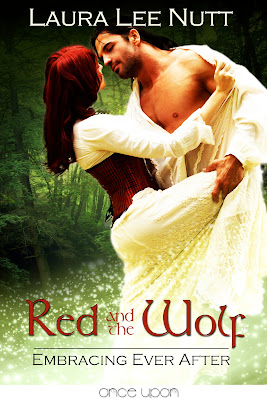 They said Little Red Riding Hood lived happily ever after. They lied.

Six years after the attack at her grandmother’s cottage, Blanchette still wilts at the sound of a wolf’s howl. The scent of pine rising from the Black Forest surrounding her home is a constant reminder of the beast’s assault and the injury it left on her finger. After years spent hiding away, Blanchette’s world tilts when she wakes–naked and without memory of the previous night–in the forest, instead of behind the safety of her closed shutters.

Since rescuing Blanchette and her grandmother, huntsman Heinrich has befriended her family by day, and keeps watch as a powerful wolf over his territory by night. Sinister otherworldly creatures constantly threaten his domain and the human village he protects.

When the emperor sends a hunter to investigate the attack and slay any inhuman beings, Heinrich must tread carefully and protect not only himself, but his newly-discovered mate, who prowls the moonlit nights alongside him. He must also determine who is responsible for a string of murdered villagers, proving he can control his lupine nature and offer protection to the village, rather than danger.

Red and the Wolf is available at Amazon Kindle, Barnes and Noble Nook, iTunes, and Lyrical Store. 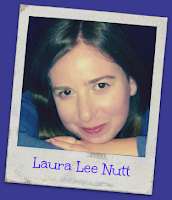 In elementary school, Laura Lee Nutt checked out every fairy tale in the library so often, if she picked something else, it was cause for curiosity. Even into adulthood, she nurtured her imagination with stories of fairies, true love, monsters, especially werewolves, and the fantastic, but she wondered what happened after “happily ever after.”

This curiosity and catching an illness one chill winter day brought her before a blank computer screen, desperately desiring to write something new. Heinrich, Blanchette, and Karl swiftly spun the tale you just read. Laura feverishly typed, barely fast enough to keep up.
Once Red and the Wolf was born, other stories coalesced in Laura’s mind, Beauty and the Beast, Sleeping Beauty, Hansel and Gretel, all asking the same questions: What might happen if the end of these tales wasn’t really the end? What were these characters’ lives really like after the harrowing events of the fairy tale? What if achieving true love and happiness required something extra? Thus came the idea for this series, Embracing Ever After, where achieving true love requires something special and happily ever after isn’t really the end.

Giveaway provided by author
Tour -Wide Giveaway Details:
I’d like to invite you to participate in the giveaway I’m hosting this month to celebrate the release of Red and the Wolf. On Monday, April 1, I’ll announce the winners on my website—no tricks for April Fools Day, I promise. You will have from 12:00 AM on Monday, March 11, central time, to 11:59 PM on Sunday, March 31, central time, to gain points. Each point counts as an additional time you will be entered in the drawing for a number of prizes such as a beautiful, illustrated edition of Andersen and Grimms’ fairy tales and Little Red Riding Hood’s basket complete with an assortment of goodies to brighten anyone’s day, even a grandmother’s whose house has just been burgled by a werewolf. For more details and how to earn points, visit my website. To earn your first point, comment on today’s post.
What is your favorite type of werewolf? For me, it’s any type that involves the internal struggle between man and monster.
GOOD LUCK!