Posted 7 March, 2013 by Lori @ Romancing the Dark Side in Book Spotlight / 0 Comments

Tess Jennings’ life is in chaos. Her ghost lover, Kipp McGowen, vanished into the Netherworld without a trace. Now, she finds herself in White Castle, Louisiana, surrounded by the Animus—a secret society of the supernaturally gifted. To make matters worse, they present her with an offer she cannot refuse.

If she helps solve the murder of their Grand Master, they will assist her in saving Kipp. Soon, Tess will land herself lost in another mystery she doesn’t want. But she will have to trust her enemies to gain what she most desires—a life with Kipp.

Only problem? People are hiding secrets and dark pasts. Tess will soon discover that nothing is as it seems. She might want to save Kipp from his ghostly state, but someone has decided it’s better for her to join him…

Running a hand through his jet-black slicked hair, Wayde shifted in his seat and crossed an ankle over his knee. “We are the Animus. The knowledge you need is within our reach. I promise to share it, if you help us.”

At my snort, since that reassured me about as much as someone holding a dagger at my throat saying they weren’t going to slice my head off, Gretchen interjected. “A promise by a Grand Master is exactly that, Tess. You can trust him.”

Something she said interested me, though. I turned to Wayde. “You’re the new leader of this…bunch?”

He nodded. “In his will, Alexander requested I take over. This home always belongs to the Grand Master, so when he passed, the house was gifted to me.”

I scanned the, more or less, American Castle in slight awe. Gretchen said it had sixty-four rooms within the three stories. From what I’d seen already, the mansion had ornamental iron railings, fifteen-foot ceilings, and innovative features. Wayde was a lucky man. “Fair enough.” I glanced at him. “But you need to do better. I won’t help unless I know, without a doubt, you’re telling me the truth.”

“A binding spell might be the best choice,” Gretchen offered. “It’s a solution to the problem. Not only will you,” she looked at me, “feel the truth behind his promise when he does the spell, but you’ll also know he has to uphold it.” She glanced at Wayde. “And this will ensure Tess holds up her end of the deal.”

Wayde hesitated, then gave a firm nod. “I’m in agreement.” He stared me down. “Will that suffice for you?”

As Gretchen had told me once, magic had to be conjured in truth, honesty, and full belief or it wouldn’t work, which left me hopeful. If Wayde agreed to the binding spell, that meant he did have the answer I needed to get to Kipp. “Possibly,” I answered Wayde, then said to Gretchen. “But first, how does the binding spell work?”

“Exactly as it sounds,” she replied in her sweet, soft voice. “Wayde will be bound to uphold his promise to help you cross into the Netherworld, as you are bound to find and talk to Alexander.”

Another positive, but my non-magical brain needed more answers. “What will happen to him if he breaks his promise?”

“Meaning I could grow sick and die, too?” At her tight nod, I groaned and considered the pact. Did I want to enter into an agreement that could kill me if I reneged on it?

Did I even have a choice?

At my silence and obvious hesitation, Gretchen smiled. She hadn’t guided me wrong yet. I firmly believed she never would. Besides, if I didn’t help them, I’d lose my ride into the Netherworld. I didn’t even need to think it over. “All right. I’m in.” I hesitated. “Wait. This isn’t a blood promise, is it?” 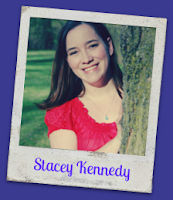