Over the past two years of blogging, author Tiffany Allee and I have bonded over our love of paranormal romances, man candy, Pinterest and Supernatural (Dean Winchester, specifically!).

You can often find us tweeting on these yummy subjects, so it was a no brainer to ask her to be part of my blogoversary celebration!

Tiffany’s sharing an excerpt from her latest paranormal romance release, Lycan Unleashed and I’m giving one lucky reader the chance to win one of her books so stick around and show Tiffany some love 😉

First of all, a huge thanks to Lori for inviting me to be a part of the blogoversary here at Romancing the Dark Side. I enjoy this blog, and am so excited to participate!

Today, I’ve decided to share an exclusive excerpt from my newest release, Lycan Unleashed, which is the third installment in my From the Files of the Otherworlder Enforcement Agency series. While the series has a bit of a mystery that comes together in the end for those who read all of the books (and there are repeat characters and cameos of previous and future main characters), each installment can also be read as a stand alone book.

This scene features Astrid Holmes, a paranormal unit detective with the Chicago Police Department, and Mason Sanderson, an agent with the OWEA (think FBI for otherworlders). They are working a case together, but have a history. As you can see in this scene. 😉

“I’m not the only one who hasn’t been entirely honest.” I pulled my foot away from him and sat up straight on the couch, balancing so the ice pack stayed on as I set my foot on the floor. I didn’t quite have it in me to stand up, but I wasn’t going to argue lying down either.

“Why did you kiss me last year?” I asked. The timing couldn’t have possibly been worse. After I’d lied to him and he’d been forced to take me in. But if I hadn’t been awake, tossing and turning with thoughts of Mason troubling my mind, I wouldn’t have sensed that vampire and who knows what would have happened? And for some reason, that loosened my tongue.

He drew back as if I’d struck him, then his face hardened even further. “Because I wanted to.”

At least he hadn’t said because he had drunk too much. “Always honest, huh? You kiss me, then you call it a mistake. You act like you care about me one minute, then like you couldn’t care less the next. You say things like… like what you said earlier tonight, and then you act like a stranger.”

“Didn’t you?” My voice raised and for once I didn’t try to stifle my anger. I’d lost too many hours of sleep over the man. “You lied when you said that kiss was a mistake and then followed me with your eyes for months after. You lied when you just said you kissed me because you felt like it in the moment.” I leaned closer to him with every word until we were only inches apart. “Why?”

I had only a split second of warning before his mouth fell onto mine. 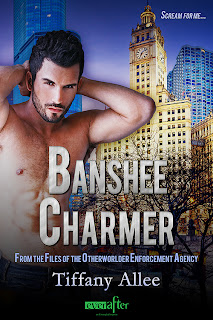 Banshee Charmer
From the Files of the Otherworlder Enforcement Agency #1
Author: Tiffany Allee
Genre: Paranormal Romance
Length: 159 pages
Release Date: January 2012
Imprint: Ever After
When she’s sent to a crime scene and finds her second dead woman in as many weeks, half-banshee detective Kiera “Mac” McLoughlin is convinced a serial killer is on the loose. Incubi are extinct, her boss insists. But what else can kill a woman in the throes of pleasure? When her partner is murdered after using witchcraft to locate the killer and Mac is thrown off the case, her frustration turns to desperation.
Certain the killer is an incubus, Mac works behind her department’s back to chase down slim, sometimes perilous leads. While the killer eludes her, she does discover handsome Aidan Byrne, an investigative counterpart from the enigmatic Otherworlder Enforcement Agency. Mac typically runs her investigations fast and hard, but with Aidan at her side, she’s running this one “hot” as well. But Aidan knows more than he’s letting on—something that could shatter their blazing romance and add Mac to the killer’s growing body count… 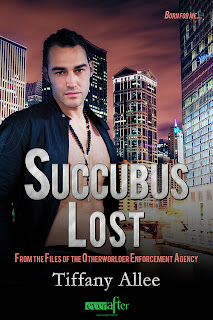 Succubus Lost
From the Files of the Otherworlder Enforcement Agency #2
Tiffany Allee
Genre: Paranormal Romance
Length: 211 pages
Release Date: May 2012
Imprint: Ever After
Someone is kidnapping and incinerating otherworlders beyond recognition, and Detective Marisol Whitman, a succubus, races to find the murderer before he claims another victim. But her pursuit is derailed when her responsible younger sister vanishes. Marisol suspects foul play and enlists support from an unlikely source: an agent from the Otherworlder Enforcement Agency, Valerio Costa.
When the trail pointing to everyone from vampires to witches dries up, Agent Costa admits to knowing more than he’s shared. Marisol’s sister’s kidnapper harnesses more magic than she can imagine—and they’re running out of time. To find her sister before her powers are drained and twisted beyond recognition, Marisol must connect the dots between cases and put her trust in Costa, a salamander who may burn her before she can solve either case. 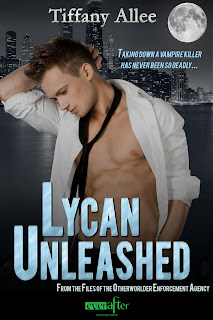 Lycan Unleashed
From the Files of the Otherworlder Enforcement Agency #3
Tiffany Allee
Genre: Paranormal Romance
Length: 162 pages
Release Date: January 2013
Imprint: Ever After
Detective Astrid Holmes is a sensitive, a human capable of feeling the energy of otherworlders. When she is dispatched to the horrific murder scene of a local vampire, she expects it to be just another day on the job. But when evidence is stolen on her watch, she is removed–not only from the investigation, but from her job as a member of the Chicago police department’s paranormal unit.
Astrid’s only hope of reinstatement lies with her ex co-worker and almost-lover, Lycan Mason Sanderson. But convincing the OWEA agent to let her assist with the investigation isn’t nearly as difficult as staying alive when the murderer realizes that Astrid may hold the key to unlocking his identity.
Fighting to take down a killer could have deadly consequences for Astrid and Mason, but working together puts their already fragile relationship in jeopardy. 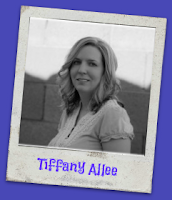 Tiffany currently lives in Phoenix, AZ, by way of Chicago and Denver, and is happily married to a secret romantic. She spends her days working in Corporate America while daydreaming about sexy heroes, ass-kicking heroines, and interesting ways to kill people (for her books, of course). Her nights are reserved for writing and bothering her husband and cats (according to them). Her passions include reading, chocolate, travel, wine, and family.