I’m super excited to have author Suzanne Johnson stopping by the blog today! If you’re a fan of DJ and the Sentinels of New Orleans series you’re going to love this early sneak peek at Elysian Fields Suzanne is sharing with us…and if you’re new to the series, I highly recommend them!

First, a very happy second Blogoversary to Lori and Romancing the Dark Side!

The months before a new book release are always kind of a “hurry up and wait” thing, so I’m impatiently waiting for readers to be able to see what’s up with the characters of my Sentinels of New Orleans series…only Elysian Fields isn’t out until August 13!

So while you’re wondering how our wizard DJ’s going to react to that last scene of book two, River Road (you know the one, where Alex changes the rules—yeah, I knew you’d remember), here are a few other things for you to look forward to…

MAKE ROOM FOR ELVES! DJ is the only wizard with enough elven DNA to do some of their funky magic, and in Elysian Fields, we’re going to find out just how funky it is. You’ll renew your acquaintance with Mace Banyan, head of the Elven Synod, who made a brief appearance in River Road. You’ll meet the other members of the Synod. And if you think these are going to be tights-wearing, pointy eared, ethereal, noble elves a la Lord of the Rings, think again!

NEW PRETES ON THE BLOCK. In Elysian Fields, the vampires will come out to play for the first time. You’ll meet Etienne Boulard, a Regent (think marshal), and will visit his French Quarter club, L’Amour Sauvage. The big preternatural groups (wizards, elves, vampires, shifters and fae) are beginning to align themselves politically. We’re not yet sure whose side the vampires are on, but we’ll have some theories by the end of the book…and an interesting new wrinkle.

PROMOTED TO MAJOR CHARACTER STATUS. A few characters who’ve had smaller roles in the series will step up to big parts in Elysian Fields. Quince Randolph, DJ’s suspicious hippie landscaping neighbor and boyfriend of her friend Eugenie, will finally show his hand. You might love him, you might hate him, but Rand won’t bore you. Adrian Hoffman, the “speaker” of the Elders who’s been a bit player in both Royal Street and River Road, likewise is elevated to star status in this book. DJ calls him the “the world’s most annoying wizard,” but through Adrian we’ll finally get to see the kind of “creative magic” Blue Congress wizards can do.

BACK WITH A VENGEANCE. Well you know our girl DJ Jaco will be back, along with the elven staff she calls Charlie. Her skills, both wizard and elven, are going to be greatly tested, and her relationships with Alex Warin, Jake Warin, and, yes, even the undead pirate Jean Lafitte will all take twists that might be unexpected. She’s forced to make some difficult choices when her back’s against the wall, and they have greater long-term consequences than she could have imagined. And back by popular demand will be DJ’s new BFF, Rene Delachaise. Our favorite Cajun merman is always ready for an adventure, babe. 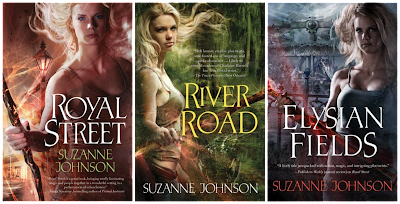 Are you new to the Sentinels series? I have a signed copy of Royal Street or River Road for a commenter (and River Road, by the way, will be out in trade paperback on June 25). Already a Sentinels fan? How about a swag pack that includes pens, coasters, bookmarks and maybe even a “Member, New Orleans Prete Squad” T-shirt? Are you Team Alex, Team Jake or Team Jean Lafitte? (Yeah, I know he’s technically dead, but DJ does have a weakness where the pirate’s concerned.) 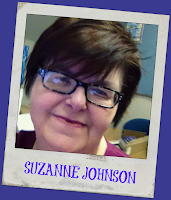 Suzanne Johnson is the author of the Sentinels of New Orleans urban fantasy series from Tor Books. Royal Street, book one, came out in April 2012; River Road in November 2012. Book three, Elysian Fields, will be released on August 13, 2013.
A longtime New Orleans resident, Suzanne is a veteran journalist with more than fifty national awards in writing and editing nonfiction for higher education, including the Robert S. Sibley Award for the best university magazine in the U.S. and Canada, for the Rice University Sallyport.
Suzanne is an active member of Science Fiction and Fantasy Writers of America, Romance Writers of America, and is a member of the Georgia, Southern Magic, and Fantasy, Futuristic and Paranormal chapters of RWA.

{Open Internationally}
Enter via widget below
a Rafflecopter giveaway