This is last day of my blogoversary celebration and I have a special guest who’s stopped by, author Kait Ballenger! I met Kait a few months ago via blogging and Twitter, she’s super cool and loves sexy alphas and strong heroines like yours truly so we hit it off immediately. Her debut new release, After Dark (with Gena Showalter), hits shelves this June, but today Kait’s here sharing some of her bookish pet peeves with us…you know you have them too!

A big thanks to all the authors who participated and all the readers and fellow bloggers for making this blogoversary such a fun celebration! I truly appreciate all the love and support you’ve shown me with your comments and tweets! <3

My Bookish Pet Peeves by Kait Ballenger
I love reading great books, and I think it’s safe to say that pretty much every successful author out there ended up where they are now because one of thing: they love reading, too. What other than love would cause someone to slave away hours a day writing their first unsold novel with no guarantee of pay? As classic book nerds, most authors love to talk about what they love and don’t love about their all time favorite novels, so when Lori asked me to write a post about my top five bookish pet peeves for her blogoversary, it was easy to figure out my top five bookish pet peeves: they’re exactly the things I strive to make sure my novels don’t have. So when I share these five bookish pet peeves, I’d also like to make a promise. I promise that, to the best of my ability, the following things are something you will NEVER find in the pages of a Kait Ballenger novel. So here you have it, from least to greatest, my five bookish pet peeves:
5.  A sagging middle
This bookish pet peeve makes me disappointed every time I encounter it. As a reader of mainly paranormal romance and urban fantasy, I love a good action packed story. When I first crack open the spine of a brand new novel I’ve never read before and the first few pages hook me into the story, something magical happens: I get absorbed in the pages unable to put the book down. Few things are more disappointing than when a book starts strong and filled with tension, only to taper into a sagging middle. For those of you who’ve never heard the term, a sagging middle is when the middle of a novel is nowhere near as filled with tension and action as its opening and ending. I always groan in disappointment when I’ve been flying through the first one hundred pages of a book, turning the pages as fast as I can, only to arrive at a slow spot that slows me down and causes me to have to force myself to continue reading, because I always do continue reading, somehow holding out hope that the action or tension will pick back up, but it rarely does. As a result, when I’m writing the novels of my debut Execution Underground series, I try very hard to ensure that every moment of that middle is just as interesting as the beginning and end.
4.  A clichéd villain
Like the sagging middle, this bookish pet peeve is certain to rip me from the story. As where a sagging middle makes me pout and wish the page-turning goodness would return, this bookish pet peeve just makes me laugh—and not in a good way. Does the big bag villain live in a dark medieval style castle surrounded by a moat with a draw-bridge and snapping alligators? Does thunder crackle and lightening strike when they speak? Does all this occur even though the novel is set in current day Manhattan? If so, chances are the villain is clichéd or overdone. Though it won’t ruin the entire book for me, I’ll have a hard time taking the main characters seriously when they quiver in fear at the villain’s threats. Thus, I promise to never write a clichéd villain into my plot lines. I think you’ll find the villains of the Execution Underground to be more American Psycho and Silence of the Lambs style. They’re anything by laughable.
3.  A cruel hero
This isn’t something I see frequently, but I mention it because a novel I read lately, one which shall not be mentioned or referenced in any way, had a cruel hero. Not only did it wrench me out of the story, but it made me want to chuck the book across the room. A hero gets his title for a reason and I never want to see the hero I’m supposed to love pick on the underdog or treat someone beneath him indecently like some sort of  frat boy picking on an incoming rush student. So I promise the heroes of the Execution Underground, though flawed, will live up to the title of hero.
2.  A weak or whiny heroine
This bookish pet peeve is one that can ruin and destroy an entire book for me. It doesn’t matter how much I love the hero, if the heroine is weak and/or whiny, I just can’t enjoy reading the book. Unfortunately, I see this happen a lot in my genre. But though I write paranormal romance, I’m also a fan of urban fantasy. In fact, I was a fan of urban fantasy long before I ever picked up a paranormal romance novel. So, I like my kickass heroines and when the heroines aren’t kickass, I find myself disappointed. Don’t get me wrong, every heroine has to have her vulnerabilities and weaknesses (just like the hero should as well), but I want a heroine whose strong enough that she’s worthy of standing side by side with my alpha heroes, not just as a love interest, but as a comrade. I think you’ll find the heroines of the first two novels of the Execution Underground—vampire hunter Tiffany Solow, and packmaster of the Rochester werewolf pack Frankie Amato—are far from weak or whiny.
**Warning: the following bookish pet peeve contains strong sexual references. If you’re under the age of eighteen, I suggest you stop reading this post now**

1.  Flowery sexual euphemisms
I like paranormal romance—hot, sexy paranormal romance. I want chemistry that sizzles and makes me want to drool in anticipation as I read, not passages where the hero refers to the heroines labia as her “love petals” and prepares to pound into her with his “throbbing member.” No. Just no. I understand a need for discretion now and then, in fact I’ve had to use a mild euphemisms a time or two in my own novels at my publisher’s request, but the hero’s cock is replaced with a “love stick” I…just…can’t…handle it. So I promise to never use any flowery sexual euphemisms in my romance novels so long as my publisher allows it.
Hopefully the above gives you a small glimpse not only into my reading preferences, but into the sort of content you can expect when you open a novel of the Execution Underground for the very first time.
I’d like to thank Romancing the Dark Side for allowing me to guest post today! Happy Blogoversary, Lori!
All Best,
Kait Ballenger Vampire hunter Damon Brock’s newest assignment with the Execution Underground is Rochester, New York, a city crawling with the undead. But he isn’t the only hunter in town gunning for vamp blood. Tiffany Solow is fierce and ruthless when it comes to slaying the monsters that destroyed her family-and she works solo.

But being alone is no longer an option when she meets the mysterious hunter who wants more than just her turf. Forced to unite against the local covens, the line between good and evil blurs when they must decide between their lifelong beliefs…and their newfound desires. 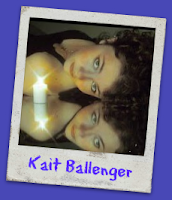 Enter via the widget below:
a Rafflecopter giveaway
An ecopy of ReVamped by Ada Adams