Welcome to the Release Book Blitz! Nicole Hadaway is currently promoting her new book, Release, a vampire romance set in WWII, sounds interesting, right? Read a little more about it and the author below. 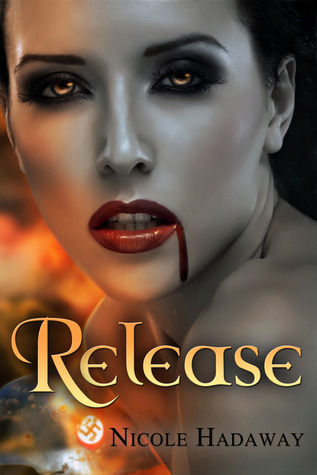 The old saying goes, “The ends justify the means”…

For vampire Miranda Dandridge, using her supernatural abilities to rescue children from impossible circumstances is her means to be a part of the human world that she loves so much, despite the atrocities of WWII.

For doctor Ben Gongliewski, saving his fellow Jews from the horrific death camps is an end for which he risks his own life every day, hiding his Jewish heritage while feigning loyalty the SS.

Neither Miranda nor Ben expects to find love in World War II Europe, but that is exactly what happens as they work for the Resistance. When the war draws to a close, it seems like the vampire and the doctor are free to start a future together. Yet the two forget just how far the Nazis will go to further their own evil ends.

Desperate times make for ruthless men as loves and lives are threatened, but, Miranda and Ben know that their world cannot go to hell, not by any means…

Avid reader, lover of education, and total geek, I make my living with my law degree, but love to indulge my creative side through my novels. I’ve written RELEASE, which is due for re-publication through Visionary Press in January; hopefully soon after will follow RETURN (the sequel) and REDEEM. All follow my main character, the vampire Miranda Dandridge, as she makes her way in the world owned by humans, envying them and loving them, at great sacrifices of her own. Hopefully soon, things will settle down for her, but she’s got alot to redeem first…

World War II, Nazis and Vampires?!
I’ll be adding this one to my TBR shelf ASAP…how ’bout you?