Posted 1 April, 2013 by Lori @ Romancing the Dark Side in Giveaways, Guest Posts / 1 Comment

Happy Release Day to The Peculiar Pets of Miss Pleasance! Delilah S. Dawson, author of Wicked as They Come, is celebrating the release of her new novella in the Blud series and chatting with us today! Stick around…there’s also a giveaway 😉

Well, characters. Frannie and Thom of THE PECULIAR PETS OF MISS PLEASANCE go together like fuzzy kittens and lavender cake. Or like Thor in a kilt and… me. Here’s why.

Thanks so much for letting me stop by! I hope you’ll check out my e-novella, THE PECULIAR PETS OF MISS PLEASANCE, out April 1 with Pocket. The next full-length book in my Blud series, WICKED AS SHE WANTS, is out April 30. You can also find me on Twitter and on my blog. And if you’re into artisan perfumes, you can find scents based on my characters at Villainess Soaps. 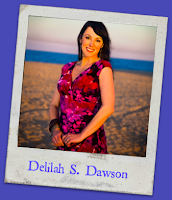 Delilah S. Dawson is a native of Roswell, Georgia and the author of the paranormal romance Blud
series for Pocket, including WICKED AS THEY COME and an e-novella, THE MYSTERIOUS MADAM MORPHO. The second book in the series, WICKED AS SHE WANTS, and a second novella, THE PECULIAR PETS OF MISS PLEASANCE, will be out in spring 2013, and her first YA, a creepy paranormal called SERVANTS OF THE STORM will be available in spring 2014. RT Book Reviews has called her “a wonderfully fresh new voice!”
Delilah is a member of the Romance Writers of America, the Georgia Romance Writers, and the Artifice Club. You can also read her product reviews at www.CoolMomPicks.com and www.CoolMomTech.com, where she is an Associate Editor. She’s a geek of all trades, a synesthete, and the sort of person who saw Spawn in the theater and made other people angry by laughing. Find her online at www.delilahsdawson.com. Bring cupcakes.

Giveaway provided by Romancing the Dark Side
To celebrate its release, I’m giving away an ecopy of The Peculiar Pets of Miss Pleasance! In a world ruled by blood, live pets are rare and kindness rarer still. London pet shop owner Frannie Pleasance has a mysterious way with animals and keeps her charges (and heart) locked in a veritable Eden. She thinks Casper Sterling is just another stray…until she takes in the troublesome lodger (and unwelcome suitor) and becomes the victim of a series of strange and dangerous occurrences.

When an unexplained fire threatens to destroy Frannie’s carefully guarded world, firefighter Thom Maccallan is there to extinguish the blaze and help gather the lost creatures. The heat between Frannie and Thom begins to burn, but someone’s still after the lady. Could it be Casper himself, or is Frannie’s new lodger just another victim of fate? Will they be able to figure out who’s pursuing Frannie—and stop them—before she loses everything?

One Response to “{Guest Post + Giveaway} Why You’ll Love the Main Characters of "The Peculiar Pets of Miss Pleasance" by Delilah S. Dawson”