Posted 7 May, 2013 by Lori @ Romancing the Dark Side in Author Interviews, Giveaways / 16 Comments

RtDS: Welcome to Romancing the Dark Side Bec McMaster, it’s a real pleasure to have you stop by and chat with us today. * Please help yourself to the virtual tea and scones 😉 *
BM: Thank you so much for having me! And tea and scones… You just said the magic words.
RtDS: Give us three (3) interesting facts about yourself that may surprise your readers.
BM: 1: Spiders and snakes? No problem. Public speaking? Consider me a wreck.
2: If I wasn’t a writer, I’d love to be an archaeologist, travel consultant or architect.
3: Despite the fact I write steampunk and love imagining devices that could have been, I’m technologically challenged in real life.
RtDS: Describe the relationship between Lena and Will in Heart of Iron, in 140 characters or less.
BM: He’s a virgin, she’s a flirt. He’s tough, rough and dangerous to know and she’s the only one who can wrap him round her little finger.
RtDS: You’ve flawlessly combined historical romance with the paranormal in your dark and gritty world of blue bloods, the Fade, vampires, werewolves and the Echelon. Is there a theme or idea you haven’t written about yet but would love to work with?
BM: Way too many ideas, not enough time. I love anything with a spec-fic nature, so anything along those lines. I’d love to do something apocalyptic/dystopian, but only if it wasn’t the same-old, same-old.
RtDS: Who was the most difficult character to write in Heart of Iron?
BM: Will. I answered that question in one second flat. (Laughs). I think it was because Blade (from Kiss of Steel) came so easily to me, so fully formed. I could see Will – this huge, hulking brute who just preferred to be alone – but I couldn’t get him to talk to me for a long time.
RtDS: Would you like to see the London Steampunk Series come to life on the big screen someday or do you prefer it remain as a written body of work?
BM: When I write, I see my books like a movie in my head, so I already feel like I’ve gotten the movie version. However, I’d be interested to see what someone could do with it on the big screen. Just to reach a whole different audience, even if they’re viewers rather than readers. And because then, according to my little sister, I would officially be the coolest big sister ever.
RtDS: Who are your go to authors when you want to escape in a book?
BM: Stacia Kane, Lilith Saintcrow, Meljean Brooks, Kylie Griffin, Ilona Andrews… I love being immersed in any of their worlds.
RtDS: If you could switch places with any of your characters for a day, who would it be and why?
BM: Maybe Lena? Because tormenting Will would be so much fun. I wouldn’t want to leave the house though, because they live in such a dangerous world.
RtDS: What has writing helped you discover about yourself?
BM: That nothing is impossible if you want it badly enough, especially your dreams.
RtDS: Finish this sentence using as much or little detail as possible: The London Steampunk series will appeal to readers who…
BM: …love fast-paced plots in dark and dangerous worlds, with sexy heroes, corsets, automatons and heroines who aren’t afraid to kick a little ass, bustle-style.
RtDS: What can we expect from the next book in the series?
BM: My Lady Quicksilver is due out in October 2013 and pits Sir Jasper Lynch – the stern, dutiful Master of the Nighthawks – against the masked revolutionary, Mercury. The only problem is that Mercury is a dangerously seductive woman and Lynch has three weeks to deliver her head to the Prince Consort – or risk his own.
Just for fun:
RtDS: Coffee or Tea?
BM: Tea.
RtDS: Downton Abbey or Ripper Street?
BM: Downton Abbey. Only because I haven’t seen any Ripper Street, although if it’s anything about Jack the Ripper, I may have to check it out.
RtDS: You’re stranded on a deserted island and can pick one book and one person to spend the time with. Which book do you choose? Who would you want for company? {Real or Fantasy…ladies choice}
BM: I would take Pawn in Frankincense by Dorothy Dunnett, because that has the intensity and emotional destruction of thirty other books, and Crixus, from Spartacus. Because every girl needs a Gaul.
RtDS: What’s your current guilty pleasure?
BM: I’m eating homemade choc-cross buns at the moment, and if my boyfriend doesn’t get home soon there will be none left for him!
Bec, thanks for chatting with us, it was a joy having you here today, feel free to stop by again! 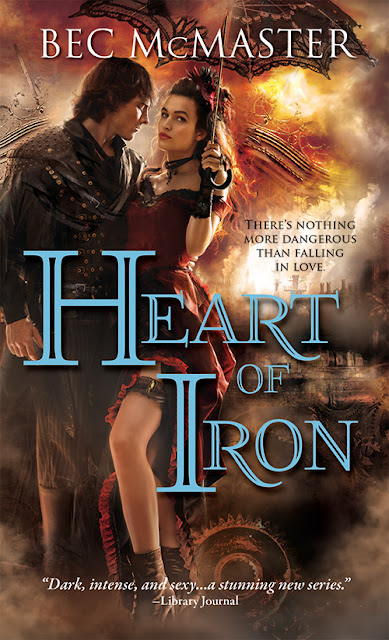 In the mist-shrouded streets of London’s dreaded Whitechapel district, werewolves, vampires and a clockwork army are one step away from battle…
NO ONE TO TRUST
Lena Todd is the perfect spy. Nobody suspects the flirtatious debutante could be a rebel against London’s vicious elite—not even the ruthless Will Carver, the one man she can’t twist around her little finger.
Will Carver, is more than man, he’s a verwulfen and he wants nothing to do with the dangerous beauty who drives him to the very edge of control. But when he finds Lena in possession of a coded letter, he realizes she’s in a world of trouble. To protect her, he’ll have to seduce the truth from her before it’s too late.
“Deftly blends elements of steampunk and vampire romance with brilliantly successful results…darkly atmospheric and delectably sexy.” –Booklist, starred review for KISS OF STEEL

To purchase Heart of Iron: 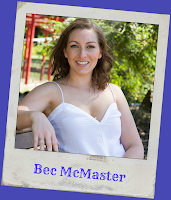 Award-winning author Bec McMaster lives in a small town in Australia and grew up with her nose in a book. A member of RWA, she writes sexy, dark paranormals and steampunk romance. When not writing, reading, or poring over travel brochures, she loves spending time with her very own hero or daydreaming about new worlds. The third book in the London Steampunk series, My Lady Quicksilver

Most people avoid the dreaded Whitechapel district. For Honoria Todd, it’s the last safe haven. But at what price?

Blade is known as the master of the rookeries—no one dares cross him. It’s been said he faced down the Echelon’s army single-handedly, that ever since being infected by the blood-craving he’s been quicker, stronger, and almost immortal.

When Honoria shows up at his door, his tenuous control comes close to snapping. She’s so…innocent. He doesn’t see her backbone of steel—or that she could be the very salvation he’s been seeking.