I’m super excited to be hosting a stop on the After Dark Blog Tour! This new release features two, steamy stories by paranormal romance authors Gena Showalter and Kait Ballenger that are guaranteed to heat up your summer reading! Today, I have the pleasure of sharing my interviews with the alpha heroes of After Dark, they have vampires and demons to kill so let’s get right to it…

RtDS: Damon, I’d like to thank you for taking time out of your busy schedule to chat with us today. I know you’d rather be out hunting vampires so let’s get on with it…

DB: The faster is this ends the better. My author forced me to clear my schedule until this is finished.

RtDS: Give us three interesting facts about you.

DB: I carry at least five weapons on me at all times. My most valued possession is a silver sword passed down in my family for several centuries. I am descended from a line of hunters which pre-dates the Execution Underground.

RtDS: Describe your author in 140 characters or less.

DB:  Kait and I did not get along at first. But Kait refuses to take no for an answer. I tolerate her. She’s somewhat sadistic. She and Tiffany get along like schoolgirls.

RtDS: Walk us through a typical day in your life.

DB: I sleep most of the day, and then when night falls my work begins. I spend every evening hunting or organizing my division.

RtDS: Do you have any hobbies?

DB: Does enjoying my job count?

DB: Spend it with Tiffany. Ideally, I’d go back in time and Mark’s blood wouldn’t be on my hands.

DB: A sword passed down in my family for several centuries. Kills bloodsuckers like a charm.

DB: I don’t have time for that sort of thing—movies and reading—but my author is yelling Dean Winchester from behind me. She says he’s a hunter, too.

RtDS: What’s your biggest fear? You don’t have to answer this one if you don’t want to…

DB: I don’t divulge my fears to anyone.

DB: I’m not a sharing is caring type of person.

Lysander: Sadistic at times.  She paired me with a Harpy, the spawn of demons!  But she’s also…kind of wonderful.  She paired me with a woman I never would have chosen for myself, but one I now know I cannot live without.  A woman who is utterly perfect for me.  Bianka challenges me, amuses me…and tempts me in every way.

Lysander: Bianka Skyhawk.  I crave her more than air to breathe. (Though she would remove my heart with her bare hand if she heard me refer to her as a possession.)

RtDS: When you walk into a room, what do you expect people to notice about you?

Lysander: The glint in my eyes that says I would as soon kill you as look at you.  (It’s not a glint that lies.)  The magnificence of my golden wings—never touch!  The fact that I expect every order I give to be obeyed without question.  And the great love I have for my woman.  Speaking of my woman, she says I should have gone with “godlike manjunk.”

***
There you have it, one dark and mysterious vampire hunter and one feisty demon killing angel…the two sexy men of the After Dark anthology! Which do you think will be your next book boyfriend? I think I’ve already found mine but I’m not telling just yet 😉 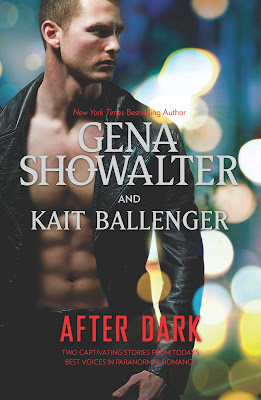 A timeless seduction. A unique temptation. And a whole world of dark desires…

From New York Times bestselling author Gena Showalter&nbsp
The Darkest Angel
Winged warrior Lysander has been alive for centuries, and yet he’s never known desire-until he meets Bianka. Spawned from the bloodline of his enemy, the beautiful but deadly Harpy is determined to lead the untouched Lysander into temptation. He may try to evade her attempts, but even  the most iron-willed demon assassin can resist for only so long….
And from debut author Kait Ballenger
Shadow Hunter
Vampire hunter Damon Brock’s first assignment with the Execution Underground is Rochester, New York, a city crawling with the undead.  But he isn’t the only hunter in town gunning for vamp blood. Tiffany Solow is fierce and ruthless when it comes to slaying the monsters that destroyed her family-and she works solo. But being alone is no longer so desirable when she meets the mysterious hunter who wants more than just her turf. As they work to massacre the local covens, the line between good and evil blurs when they are forced to decide between their lifelong beliefs… and their newfound hearts. 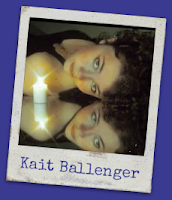 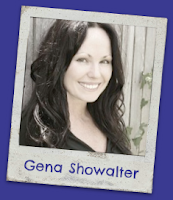 Gena Showalter is the New York Times and USA Today best selling author of the White Rabbit Chronicles, Otherworld Assassins, Angels of the Dark, Lords of the Underworld, and several of other series.  She has written over thirty novels and novellas.  Her books have appeared in Cosmopolitan and Seventeen magazine, and have been translated in multiple languages.

Giveaway provided by author
One signed copy of After Dark by Gena Showalter and Kait Ballenger
Enter via widget below:
a Rafflecopter giveaway