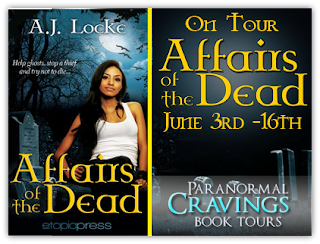 Today, I’m hosting a stop on the Affairs of the Dead Book Tour via Paranormal Cravings Book Tours. Author A.J. Locke is sharing some of her writing influences, along with her new release and a fabulous giveaway you won’t want to miss!

Thanks Lori for having me on your blog today! I thought I would do my post on the effect reading has had on me as an author.

For me, reading and writing go hand in hand; as I’m sure it does for just about every serious author out there. I think it’s our love of losing ourselves within the pages of book that sparks our desire to write stories of our own. Many of the books I’ve read have had a strong impact on me, and some of them have had an influence on the way I think about my writing. I’d like to share a few of them, and I’ll start with a childhood favorite: 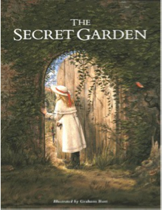 As much as I love reading, I don’t tend to re-read books over and over again, but all three of the books I’m sharing are exceptions. I used to read The Secret Garden a lot when I was a child, and even as I got older I’d pick it up again from time to time. What I loved most about this book was the world Mary, Colin, and Dickon built inside their garden. They saw potential, growth, and magic in a place no one else saw it, and were able to breathe life not only into the garden but themselves and the people around them. This was a novel of change; each of the main characters changed in some way for the better, and the catalyst for it was a simple garden and a girl who just wanted a small place for her own.

The Sound of Waves – Yukio Mishima

The Sound of Waves is a Japanese novel set on a small fishing island, and tells the love story of a simple fishing boy and a wealthy young girl. There’s no big enemy to contend with, and the setting doesn’t stray far from the island, but the story is impactful. I loved the quiet pace of the story, as well as its simplicity and power it has to convey how these two young people fall in love and the obstacles they faced. I could easily believe this was someone’s true story, like I was getting a glimpse into someone’s life, and it wasn’t someone who was famous, or extraordinary or important, just someone real who may have existed on a small island out there in the world.

Oh the tragic love story of Cathy and Heathcliff. He is dark, damaged, and borderline evil, she is selfish, annoying, and self absorbed, but you love them because of the way they love each other. Their dark, tormenting, all consuming love is what I love most about this story. This is a novel of extremes; Bronte pushes the emotion of loving someone as far down a twisted, stormy path as she could until the reader feels it almost palpably. You do not doubt Cathy and Heathcliff’s feelings for each other even though all that seems to surround them is tragedy. Personally, I draw from this story whenever I am trying to push myself to go deeper with an emotion I am trying to convey with my writing whether it be in a book or a poem. It also made me not afraid to explore the darker side of things.

For me, what these three novels have in common, even though they are all so different, is that they tell powerful stories in minimal settings. You don’t stray from the mansion or the garden in The Secret Garden, you only leave the island to see what Shinji’s life is like on a fishing boat in The Sound of Waves, and you never really leave the moors in Wuthering Heights. These novels showed me that you don’t need a sweeping landscape to tell a powerful story. They also showed me how a good character driven story is written, and how to balance all the emotions necessary to do so successfully. These are all things that are at the back of my mind when I write; I try to make my characters strong but flawed, give them reasons for the things they do or don’t do, as well as reasons to fall in love or reasons to believe in something. Without being a good reader, I don’t think I’d have a chance of being a good writer, which is all I hope to be. 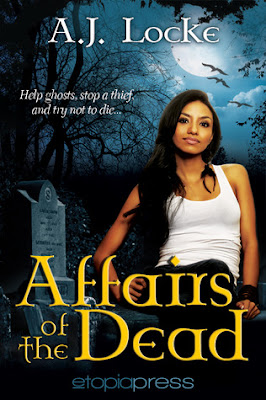 Help ghosts, stop a thief, and try not to die…

Necromancer Selene Vanream helps ghosts settle their affairs so they can move on. But when breaking the rules gets her in trouble, she’s bumped down to tracking ghosts trying to avoid the afterlife. Ghosts like Ethan Lance, who claims he was kicked out of his body when someone else jumped in. Which might be plausible—if such a thing were possible. And if Micah, Selene’s partner, didn’t pull her into an investigation of brutal murders that lead directly back to Ethan.

But when the whole mess puts Selene’s life in danger, she suddenly has very personal reasons to get Ethan’s body back. Between her uncomfortable relationship with Micah, and problems with her boss, Selene learns just how much trouble it can be when you don’t follow the rules… 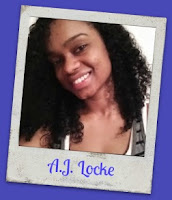 A.J. Locke is an author and artist, originally from Trinidad, now residing in New York City. Affairs of the Dead is her debut novel, and other than writing she enjoys reading, drawing, painting, graphic design, and watching too much television.

Giveaway provided by author
Tour-wide Giveaway
Five (5) necklaces and an Amazon or B&N gift card
Enter via widget below:
a Rafflecopter giveaway