A big HELLO to Susannah Scott who’s stopping by today to talk about her fun and flirty paranormal romance, Luck of the Dragon!

Thank so much for having my on Romancing the Dark side today! You asked me to introduce you to a character from my fun, paranormal romance, Luck of the Dragon.

Alec is my uber hot, Joe Manganiello-looking hero. Alec owns a ritzy Las Vegas casino, which provides a hidden-in-plain-sight sanctuary for his dragon-shifting people. His only problem is that Lucy, the sexy gem appraiser trying to steal from him, just might be his mate.

I think the best introduction to Alec comes in the first few pages of the book, from Lucy’s perspective. (This is a paired-down excerpt)

Lucy’s head pounded right between her eyebrows. She pulled in a deliberate breath, held it, and blew it out. The action made her cleavage look downright Betty Boopish.

Good Lord. What was she doing here?

She was Luciana De Luca, Ph.D—the world-renowned gemologist—casing a hundred-million-dollar joint like it was an unprotected street vendor…

“Ladies and gentlemen.” A barrel-chested emcee wielded a microphone from the elevated stage about fifty feet to her left. “Welcome to the grand opening of the Crown Jewel Casino. It is my pleasure to introduce you to the legend, the casino maker, the King of Las Vegas…Mr. Aleeee-eeec Gerrr-aaaald!”

The crowd members swiveled their heads, scanning for the first sign of the Casino King. A low drum roll began, picking up speed until it seemed the drummer’s arms would give out. But the stage remained empty. The King of Las Vegas was late to his own party.

Miss Manners would have a conniption.

Suddenly, the scent of burning embers swirled over the courtyard and the wind settled, blowing Lucy’s dark red hair around her face. A ground-vibrating roar followed, making every human eye search the sky for the source.

Heart pounding, Lucy crouched with the crowd, just as a large SUV-sized black object careened through the air and landed on the raised stage with a thud. The acrid scent of smoldering intensified. Pounding from the stage rattled her eardrums. Whatever had landed there was moving and alive. On the platform, clawed feet stomped, and the creature’s matte black skin stretched over powerful muscles and bones. Black wings unfurled across the stage, and the animal roared again at the crowd, baring razor-sharp white fangs.

Suddenly, a burst of smoke covered the dragon, and the creature disappeared.

A dark-haired man in an elegant tuxedo stepped through the gray fog and approached the microphone.

“I am Alec Gerald.” His voice was deep, and his accent was hard to place but suggested the upper class. “I’d like to welcome you to my newest casino, the Crown Jewel.” Gerald spread an open palm to the frightened crowd. “I hope you enjoyed our first show of the evening.” He gave a devious, knowing smile. “It was all just a costume. Don’t be frightened.”

After a few seconds, the stunned audience stood and broke into applause and catcalls.

Lucy stood, glaring at the casino owner. She had researched him, of course, studying his athletic image in hundreds of Internet pictures. The man was good-looking, apparently brilliant, and ruthless in his business deals. Watching the mesmerized crowd lean toward the stage, she had to admit he had that something else too—the showmanship of a champion con man—a magnetism she knew could draw people like lemmings off a cliff.

The man was flat-out people-genic.

I hope you enjoyed this peek into the Crown Jewel casino and the introduction to Alec and his dragon!

All my best,
Susannah Scott 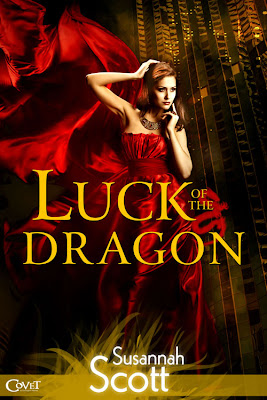 Luciana de Luca has a PhD in sass and gemology—and a problem. Her twin brother’s gambling debts have gotten out of hand, and a mob enforcer is blackmailing her to rob the latest, greatest mega-casino on the Strip. Although Lucy has worked her whole life to get away from her family’s grifter past, to save her brother, she dons three-inch heels and a sluts-r-us dress and struts into Alec’s Gerald’s casino, determined to put her long-forgotten thieving ways to the test again.

Alec Gerald, a shape-shifting dragon, has built the Crown Jewel casino to provide sanctuary for his people amongst the flash and awe of Las Vegas. Unfortunately, the sexy little thief trying to steal his largest diamond exhibit turns out to be his mate, and he must woo her before he loses his dragon form forever. But before he can handcuff her to his bed and explain the details of a mating ceremony, an enemy attacks and threatens to destroy his casino, his people, and his newfound mate. 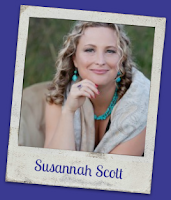 SUSANNAH SCOTT lives in the Missouri Ozarks and is the lone female in a very loud household of males ranging in age from 4 to 40. While she jokes that the extreme levels of testosterone inspired her to write romance, it is really the love of creating an excellent story, and the occasional dreams of twenty-foot dragons, that wake her and send her to the laptop before the chaos of daily life ensues. Susannah loves to hear from her readers.