Posted 26 July, 2013 by Lori @ Romancing the Dark Side in Author Interviews / 0 Comments

TGIF everyone! Today I have a fun little interview with Entangled Teen author Melanie Card. If you’re  a young adult or paranormal romance fan, you’ll want to check out Ward Against Death and her upcoming release Ward Against Darkness which includes necromancers, magic, corsets and more!

RtDS: Melanie, it’s a pleasure to have you on the blog today! Tell us a little bit about the world in the Reluctant Necromancer series.

MC: Thanks for inviting me here today. The world in the Reluctant Necromancer series is a rather complicated one. There are many aspects to it: social, political, and religious. I’d say the short description is that it’s loosely based on 16th century Europe. So swords and corsets and carriages, along rival political and religious factions. Add to that magic, the ability to see into the future and, of course, necromancy.

RtDS: What was the most difficult scene to write in Ward Against Darkness?

MC: There were a number of difficult scenes in Ward Against Darkness. Usually for me the tough scenes are when I’m mean to my hero, Ward. I strongly believe in the writer’s motto to make your characters suffer, but that doesn’t mean I always enjoy it.

RtDS: Do you have a specific style or process when writing?

MC: My style/process is pretty basic. I do a very rough plot outline (things like, confront villain, discover secret temple, Ward worries about Celia) and then I sit down with a cup of coffee and start writing and see what happens. Sometimes I stay on script and sometimes I don’t.

RtDS: Ward Against Darkness has made it to the big screen. Give us the finalists for your dream cast…

MC: This is a tough one. There are so many great actors and actresses out there. I think, however, that Ward would have to be performed by an unknown given his appearance. Which, I suppose really just says, I’m not particular, I’d just be thrilled if the series hit the big screen.

RtDS: Describe relationship of the hero and heroine (Ward and Celia) in under 140 characters or less.

RtDS: What is your favorite pastime when you’re not writing?

MC: When I’m not reading or writing I participate in my community theatre. It’s a very active theatre company that performs six shows a year so there’s lots of opportunities to get involved.

RtDS: What book is currently on your nightstand or ereader?

MC: I hope everyone has as much fun reading the book as I had writing it.

RtDS: You’re stranded on a deserted island and can pick one book and one person to spend the time with. Which book do you choose and who would you want for company? Does it have to be just one book?
MC: Regardless of the book, my companion is my husband.

RtDS: Melanie, thanks so much for stopping by and sharing your awesome new release come back any time! 😉

MC: Thanks for having me! 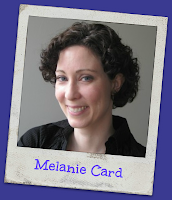 Melanie has always been drawn to storytelling and can’t remember a time when she wasn’t creating a story in her head. Her early stories were adventures with fairies and dragons and sword swinging princesses.

Today she continues to spin tales of magic in lands near and far, while her cat sits on the edge of her desk and supervises. When she’s not writing, you can find her pretending to be other people with her local community theatre groups. 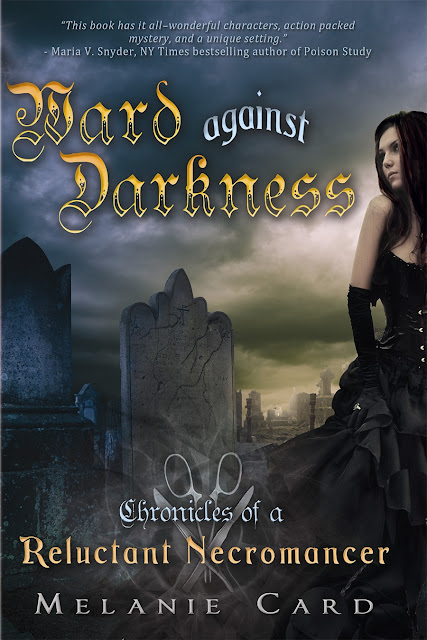 The last thing Ward de’Ath wants is more trouble. On the run from both the law and the criminal underworld, Ward and Celia flee Brawenal City only to stumble into the mansion of a powerful evil necromancer. And when Ward discovers the man possesses a dangerous grimoire, his duty leaves him no choice. He can’t allow the necromancer to keep the grimoire. But the mansion is filled with monsters—human and undead—and Ward has no way of telling who’s friend or foe. The only person he can trust is Celia who dominates more of his thoughts and feelings everyday. But there are still laws in the way of anything but friendship. She’s still dead and he’s still alive…

Get your copy of Ward Against Darkness at:
Amazon | Barnes & Noble | The Book Depository