Happy Friday! Today I have author Kimberly Frost on the blog as part of the Would-Be Witch Virtual Book Tour, hosted by Bewitching Book Tours. If you love a fun and flirty paranormal romance with plenty of humor, this series is for you! Kimberly is sharing an awesome guest post about one of my favorite characters in the series and there’s also a giveaway so stick around and say hi 🙂

“Consulting the Cat” by Kimberly Frost

Thanks so much for letting me visit with you today!

One of the most popular characters in the Southern Witch series is Mercutio, Tammy Jo’s ocelot companion. Tammy Jo and Mercutio meet in WOULD-BE WITCH when he’s gifted to her by the wizard she’s not supposed to associate with, Bryn Lyons. Tammy Jo has her reservations about fraternizing with a cat that came from a suspect source, but Merc quickly becomes her close friend and confidante.

So why an ocelot? I’m a fan of “big cats.” Maybe it’s the Leo in me? Also a witch really needs a cat. Since Tammy Jo spends a lot of time fighting villains, it made sense for her to have a big cat for a sidekick. It would’ve been tough to hide a tiger in a small town though. Something a little less conspicuous seemed the way to go.

People sometimes try to raise ocelots, which grow to be about twice the size of domestic cats, as pets. Most can’t be domesticated. The artist Salvador Dali kept ocelots, but they routinely tore up his hotel rooms. Mercutio’s a little better behaved, but he’s a true wildcat. As soon as he arrives, Merc quickly becomes territorial about Tammy Jo’s hometown and protective of her. He’ll fight anything that needs fighting, regardless of size. His fight-to-the-death attitude is probably why Tammy Jo and Southern Witch fans love him.

Here’s a brief excerpt from a scene with Tammy Jo and Mercutio in her car:

Thanks again for having me for a visit. Interested readers should drop by my website at http://frostfiction.com and download “Magic Ingredient” a free Southern Witch short story and check out the book excerpts.

For a chance to win an autographed copy of WOULD-BE WITCH, Book 1 in my Southern Witch series, please visit the comments and tell me:

What’s the most unusual name for a pet you’ve ever heard and if you know, how did the pet get its name?

What’s the wildest thing your pet does? 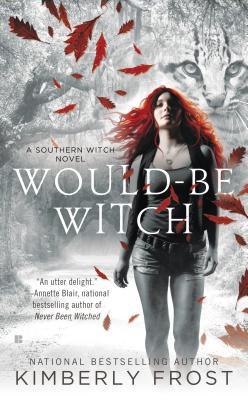 In the small town of Duvall, Texas, the only thing that causes more trouble than gossip is magic.

The family magic seems to have skipped over Tammy Jo Trask. All she gets in the way of the supernatural are a few untimely visits from the long-dead, smart-mouthed family ghost Edie. But when her locket—an heirloom that happens to hold Edie’s soul—is stolen in the midst of a town-wide crime spree, it’s time for Tammy to find her inner witch.

After a few bad experiences with her magic, Tammy turns to the only one who can help: the very rich and highly magical Bryn Lyons. He might have all the answers, but the locket isn’t the only thing passed down in Tammy’s family. She also inherited a warning…to stay away from anyone named Lyons…

About the Southern Witch Series:

In this “coming of age in the world of magic” story, urban fantasy meets humorous mystery in small-town Texas. Plucky pastry chef Tammy Jo Trask comes into her spell-casting powers unexpectedly, and malfunctioning magic makes her a reluctant heroine. As her adventures continue, she learns the secrets of her supernatural heritage and embraces her butt-kicking destiny. Gorgeous love interests and an ocelot sidekick add to the charm of this bestselling book series.
You can read my reviews of the Southern Witch Series below:

These "Etherlin" books launched in November 2011 with the novella, “First Light". It appeared in the multi-author Christmas anthology, Tied With a Bow, reaching the extended New York Times Bestseller List. The subsequent Etherlin novels included All That Bleeds, a featured Barnes & Noble “Must Read Romance”, and All That Falls, a Colorado Romance Writers’ Award of Excellence finalist.