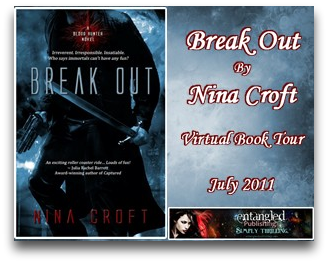 I occasionally go back and read one of the books I absolutely loved when I was younger, and honestly, some of the heroines are positively feeble. They tended to be young, ravishingly beautiful, innocent, and in desperate need of some man to come along and save them. The closest they got to kick ass was feisty. Give me a heroine like that these days, and I’d probably throw the book across the room (or more likely delete it from my kindle).

No, these days, I like a good strong, kick ass heroine (my personal favorites are Anita Blake and Mercy Thompson). By that I don’t mean they always have to be ready to literally shoot down anyone who stands in their way (though I must admit I’m partial to the shooter types), but they must be able to deal with the crap life throws them without relying on someone else to sort things out.

So here’s why I think we love a kick ass heroine,

• When I read a book, especially a romance, I want to identify with the heroine. When I was little (a long time ago) I wanted to grow up to be an assassin, or a spy or an explorer… well you get the picture. So it stands to reason that I identify with tough women (even if in reality I turned out a bit of a wimp).

• I want the heroine to be worthy of the hero. If I can’t have him then it’s because some great woman who truly deserves him has captured his heart, not some whiny, too stupid to live, beautiful young thing, who has absolutely no clue how to shoot a laser pistol and protect her man.

• Long gone is the time when we were happy to wait for some man to come along and save us, or the world. These days, if there’s anything at all out there in need of saving, then we want to be the ones to do it.

• And finally, I love the moment when a really tough heroine shows her vulnerable side, the side that only the hero gets to see, and only after he’s proved he’s worthy.

BREAK OUT, is the first book in the Blood Hunter series, and is set in a future where man has fled to the stars and discovered the secret of immortality.

The heroine, Skylar, is about as kick ass as they come. She’s a soldier, working undercover, with a mission she’s determined to see through to the end, despite the distraction of Ricardo Sanchez, the super-sexy, stunningly gorgeous, vampire pilot of the space cruiser, El Cazador.

Rico is attracted to Skylar’s toughness, but it’s actually her contradictions and the flashes of vulnerability he sees beneath her surface that make him fall in love with her. 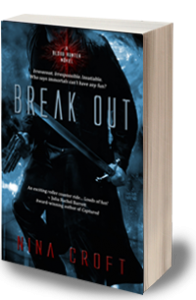 The year is 3048, Earth is no longer habitable, and man has fled to the stars where they’ve discovered the secret of immortality—Meridian. Unfortunately, the radioactive mineral is exorbitantly expensive and only available to a select few. A new class comprised of the super rich and immortal soon evolves. The Collective, as they’re called, rule the universe.

Two-thousand-year-old Ricardo Sanchez, vampire and rogue pilot of the space cruiser, El Cazador, can’t resist two things: gorgeous women and impossible jobs. When beautiful Skylar Rossaria approaches him to break a prisoner out of the Collective’s maximum security prison on Trakis One, Rico jumps at the chance. Being hunted by the Collective has never been so dangerous–or so fun!

Excerpt:
“You might want to change your mind about that reward,” Tannis murmured from beside him. “This one looks like she might fight back.”
“I don’t mind a good fight,” Rico drawled. “As long as I win.”
He swung his chair around and followed the line of her sight, his gaze settling on the tall figure in the doorway. He wouldn’t have recognized her if he hadn’t known what to look for.
The silver dress was gone and a black jumpsuit now hugged her tall, toned body. She walked with the lithe grace of a predator, one hand resting on the pistol at her thigh. The long, blond hair, which had done a lot to soften her features, was also gone. In its place was a severely short, almost military cut that emphasized the sharp cheekbones, and the large, almost beaky nose. Her dark blue eyes were the same though, as was the wide, red mouth. He dropped his gaze. There was no disguising the lush curve of those breasts either, and his body tightened at the sight.
She’d come to a halt in front of them, and he raised his eyes from her breasts to her face to find her frowning at him.
“Skylar,” he said, kicking out a chair and patting the seat. “Take a seat.”
She regarded him suspiciously for a moment and then sat.
“Quite a disguise you had there.”
“Part of my training,” she replied.
“Your rebel training?”
She nodded.
“Tell me. Why were you with the rebels? You seem a little too…” He studied her, trying to think of the correct word. Normal maybe, but he had an idea that Skylar was far from normal.
“Human?” She supplied for him. 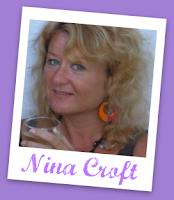 Nina Croft grew up in the north of England. After training as an accountant, she spent four years working as a volunteer in Zambia which left her with a love of the sun and a dislike of 9-5 work. She then spent a number of years mixing travel (whenever possible) with work (whenever necessary) but has now settled down to a life of writing and picking almonds on a remote farm in the mountains of southern Spain.

Nina’s writing mixes romance with elements of the paranormal and science fiction.

Here’s your chance to win an e-copy of Break Out!

Rules:
Must be 18 years or older to enter.
Giveaway ends July 10th, 11:59 pm EST.
Open internationally.
TO ENTER:
Answer Nina Croft’s question in the comments and include an email address.