Rosalie Lario, author of Blood of the Demon is stopping by today to talk us about the art of world building in paranormal romance. She’ll be sharing a little of her Infernum world and its inhabitants. Hope you enjoy!

Building an Alternate World: How the Infernum was Born
by Rosalie Lario

My name is Rosalie Lario, and I’m a paranormal romance writer. Do I sound a little bit like an addict there? Well, I am one. Nothing beats the high I get from reading and writing books, and for me, books containing paranormal elements top all the rest.

One of the things I enjoy most about writing paranormal romance is the ability to create the world in which my characters live. This is a big deal for me, because I love characters who have a little something ‘extra’. When I first thought up my DEMONS OF INFERNUM series, I knew I wanted to have sexy demon heroes who are stronger, faster, and heal quicker than humans. But I didn’t want to have the usual take on demons: making them creatures from Hell. So I created a reality with multiple dimensions, where demons are a race of beings from a world called Infernum. Portals allow for travel between dimensions, and a lot of nonhumans live here on Earth. But nonhumans can be glamoured to appear otherwise, so most of the people born here on Earth go about their lives in complete ignorance of the various races of beings that inhabit their world.

Once I decided my brand of demons would be from another dimension, I had to go about building that world. I gave Infernum many of the characteristics that are often associated with our modern definition of Hell: it’s a desertlike world that’s always dark and hot, and there isn’t much in the way of technology. People born on Infernum are used to fighting for their lives on an everyday basis, and they’re all dying to escape their world.

Making Infernum such a hellish world had the benefit of giving me some tortured heroes for my DEMONS OF INFERNUM series. I built that up even more by making the heroes half-brother bounty hunters who grew up with a sadistic demon father. Oh yeah, they’ve got some major daddy issues. And when dear old daddy becomes the fugitive most hunted by the Elden Council—the political council governing travel and interaction between the races—the brothers are more than eager to help take him down.

I’d love to know what you enjoy most about paranormal romance. Is it the intricate worldbuilding? The superhot Alpha heroes? The kick-ass heroines? All of the above?

***
A big thank you to Rosalie Lario for the fabulous guest post!

DEMONS OF INFERNUM – Book One by Rosalie Lario

Keegan lives to exact revenge on the evil demon who sired and abused him. When his father devises a plan to bring on the apocalypse, he and his three half-brothers, interdimensional bounty hunters for the Elden Council, are charged with capturing and delivering their father for punishment.

Art gallery owner Brynn Meyers has no idea that her ability to read memories embedded in objects and drain people of their life force means she has demon ancestry. Unfortunately for Brynn, she’s also the key to raising an ancient zombie army, which puts her on every demon’s Most Wanted List.

And no one wants her more than Keegan’s father.

Keegan must protect Brynn from his father by any means necessary, but he’ll have to learn to harness the other half of his genetics—the far deadlier, uncontrollable half—when he starts to fall for the one woman standing between him and the vengeance he so desperately seeks. The one woman he’ll never be able to resist.

Read an excerpt of Blood of the Demon here.

Blood of the Demon is available at:
Amazon 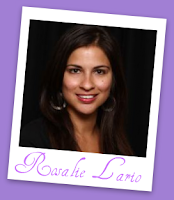 About the Author:
Rosalie Lario practiced law for five years before finally admitting to herself that negotiating contracts wasn’t nearly as fun as dreaming up stories. The first book in her Demons of Infernum series, Blood of the Demon, will be released August 2011.
For more information on Rosalie Lario, visit her here:
Website | Blog | Twitter | Facebook | Goodreads

Rosalie is offering one lucky reader the chance to win an ecopy of
Blood of the Demon.
Giveaway Details:
Must be 18 years or older.
Giveaway ends August, 30, 11:59pm, EST.
Open Internationally.
To Enter:
1. Answer Rosalie’s question in the comments.
2. PLEASE FILL OUT THE FORM HERE.