I’m thrilled to be the first stop in Amanda J. Greene’s Caressed by Moonlight Virtual Book Tour! This book has a little something for anyone who loves a good romance. Read on to find out more about this bright, upcoming author, her debut novel and feel free to leave her some love in the comments!

When did you know you wanted to be a writer?

Every time I am asked that question my mind goes blank. Believe it or not, I don’t have a concrete answer for that question. I began writing when I was young and at the time I never thought of it as a potential career.
So, how did I end up publishing a paranormal romance novel?
My passion for reading, vampires and romance, developed in middle school. A friend of mine suggested I read a book she had checked out from the library, Companions of the Night by Vivian Vande Velde. All I can say is, I was bitten by the vampire genre and was forever changed. My mind became a hurricane of ideas and characters.
I wrote the original draft of Caressed by Moonlight when I was twelve. Dorian and Victoria were my character’s names, they lived in London, and he was a mysterious vampire prince. He and Victoria met at a ball, where they fall in love and shortly after, were married. Jumping forward about a hundred years, a hunter comes to town in search of the vampire couple rumored to be causing quite a stir.
I stuck the hand written copy away in my closet, where it was forgotten about for some time.
Over the next few years I wrote two more books, one young adult vampire romance, the other, an erotic paranormal romance. Both I plan on polishing up and publishing.
Now, this is the part of my story where things get fuzzy and the answer to the question is lost.
I had just turned twenty-one. My papa (grandfather) was dieing of cancer, my husband (fiancé at the time) was getting ready to leave for Iraq, I had just started a new university, and I was living about two hours away from my family and friends…You can see why I kind of lose track. When I think back, everything is a blur – all my thoughts, emotions, and memories have crashed into each other and I can no longer tell them apart.
Around this time, I rediscovered the original draft of Caressed by Moonlight and, for fun, decided to bring it back to life. As I was working on the manuscript a thought occurred to me.
I said to myself, “Hey, this is really good.”
For the first time I began to believe in myself, in my writing, and in the characters. I finally felt like my book was strong enough to be published and somehow I gained the courage to share it with the world.
Now, I don’t know if it was my papa’s passing that triggered my determination. Or if it was the fact that I was almost completely cut off from my husband while he was deployed in Iraq for eight months. Maybe I needed something to fill my time and cheer me up. Whatever the reason, Caressed by Moonlight, the first within the Rulers of Darkness series, was released November 2010 and is doing much better than I ever imagined it would.
So, when did I know I wanted to be a writer?
Answer: I don’t know, it all just happened.

Caressed by Moonlight by Amanda J. Greene
Rulers of Darkness – Book One 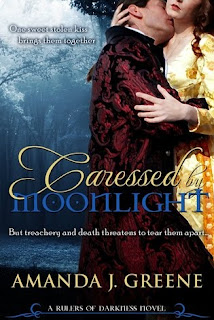 Penniless and orphaned, Victoria Kingston has nothing to bring to a marriage, yet she must shackle an unsuspecting gentleman into marriage by the end of the month or forfeit her rights as guardian of her younger sister. With the help of her dearest friend, Victoria begins her hunt, and vows to stay far away from the dark, mysterious, Prince Vlakhos.

After meeting the beautifully innocent Miss Kingston, Dorian had to have her. He would do absolutely anything to make Victoria his. One sweet stolen kiss would bring them together while a force, more powerful than any vampire would bind them for all eternity. But treachery, war, and death rule Dorian’s dark world and Victoria would be fortunate to survive.

Caressed by Moonlight is available for purchase here:
Amazon | Barnes & Noble | ARe 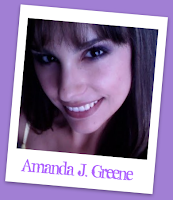 She lives in Southern California with her very supportive military husband and their sweet cocker spaniel.

For more information about her upcoming books, visit www.amandajgreene.com.