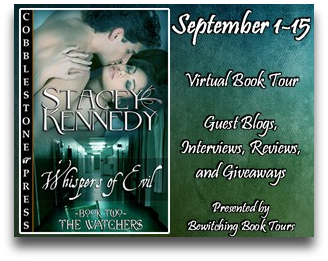 I’m so glad to welcome back the fabulous Stacey Kennedy on her Whispers of Evil Blog Tour! If you’ve already read Stacey’s books you’re going to love her new release and for those who haven’t been introduced to the fantastic paranormal worlds of Ms. Kennedy, get ready, her stories are extremely addictive!

The opening love scene in all of the Watchers books happens to be a scene where the Watcher and Seeker need to make love in front of the other Nephilim. To them, the ceremony is sacred. It’s the act of seeing the Watcher—the woman—obtain immortality and be joined with her Seeker—the man—she is bound to.

I’d love to hear from you all. Do you mind if a paranormal romance has a bit more spice than a mainstream romance novel? Or does it make your eyeballs bulge out of your head and leave you shocked? 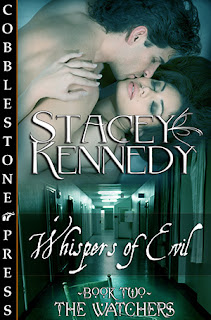 Can the whispers of evil be hushed by love, or will it be lost forever…

Nayeli has been locked away, hidden from the world in a mental institution, all due to the whispers of evil which have corrupted her mind. Unbeknownst to her, the voices that have plagued her are a gift given to only one kind―Watchers.

Griffin, her Seeker, is about to break this cage of imprisonment woven around her and give her a new chance at life. But when a demon leaves the confines of Hell to create havoc in Louisiana, will his love for Nayeli free her wounded heart, or will she succumb to the whispers which threaten to steal her soul?

*WARNING:  Explicit sex between a timid Watcher and a gorgeous Seeker, and a ceremony that will certainly raise eyebrows!

Whispers of Evil is available for purchase here:
http://www.staceykennedy.com/whispers-of-evil/

A noise drew Griffin away from his thoughts. He glanced over his shoulder, and Nayeli stood behind him, a stunning beauty. The women had obviously not only let her shower, but had given her clothes and makeup. He thought her beautiful before. Now, she was breathtaking, wearing a black camisole and jeans. Her dark hair fell soft and silky over her shoulders. Her eyes appeared sexy outlined by dark eye-shadow. Her cheeks were rosy, and her lips an enticing soft pink. He’d questioned if he could love—Am I capable—now he had no doubt. This woman belonged to him. “You’re back,” he said gently.

“I’m back,” she whispered, now standing in the middle of the room.

He could see her tremble, the fear of what was to come reflected in her eyes. He’d rectify that. She might be afraid of his touches for now. She probably worried that this would hurt, but he would bring her to a point where she begged for his advances. Bring her to a state where she whispered his name from her pouty mouth. “Come here, Nayeli.”

She paused, a moment that left Griffin’s breath in his throat. Her soft green eyes were wide and looked worried. “I…I…”

He let out a long breath and went to her. With each step he took, she reciprocated by taking a step back.
He stopped, not wanting to startle her. “Why do you fear me?”

She looked away from his gaze to the prevalent bulge in his black shorts that appeared the moment he saw her. “It’s not you so much, as that.”

Withholding his grin was near impossible. He began his approach to her again in slow, steady movements. She continued her movement backwards until she met the wall with a loud thud. She gasped.

“You fear it now, but in time, you will grow to crave it.”

“I’m not sure I can do this,” she whispered.

He closed in on her, stopped in front of her, and looked down into those eyes that could melt his soul.

He leaned down close to her mouth, and her breath came out in quick pants he was sure were due to fear. “Nayeli, you’re safe with me. I have waited years, more years than you could fathom, to have you just like this. I’m only pleased that no one has shared your bed. You have a right to be nervous, even a right to fear what will happen here, but this has to be done, not only for you to join our house, but because I cannot wait another moment not being connected to your body.”

“Will it…” She looked up to him with sweet innocent eyes. “Will it feel good?”

He grinned. “I will ensure it does.” Then, he ran his finger along her soft rosy cheek. “Of course, it may hurt a little at first, but I promise to erase that pain with pleasure.”

A little smile lifted the side of her face. She stepped in closer, and her body came tight against his hardened length. “Well…that doesn’t sound so bad.”

He arched his brow, grinning in return. “No, it doesn’t.” Then, he leaned down and captured her lips, gentle at first, testing her ways. His hands came up around her face as he titled her head back, bringing her mouth higher to meet his. Slowly, she succumbed and parted her lips, and he continued with open mouth kisses. He worked his mouth along with hers in a manner that would weaken her in the knees. 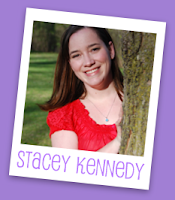 Stacey Kennedy’s novels are lighthearted fantasy with heart squeezing, thigh-clenching romance, and  even give a good chuckle every now and again. But within the stories you’ll find fast paced action, life threatening moments and a big bad villain that needs to be destroyed. Her urban fantasy/paranormal and erotic romance series have hit Amazon Kindle and All Romance Ebooks Bestseller lists. If she isn’t plugging away at her next novel, tending to her two little ones, she’s got her nose deep in a good book. She lives in Ontario, Canada with her husband. Be sure to drop her a line at www.staceykennedy.com, she loves to hear from her readers.

Here’s your chance to win an e-copy of Whispers of Evil!
Giveaway Details:
You must be 18 years or older to enter.
Giveaway ends September, 10, 2011 11:59 EST.
Open Internationally.
To Enter:
Leave a comment answering Stacey’s question
and fill out THIS FORM.
GOOD LUCK!