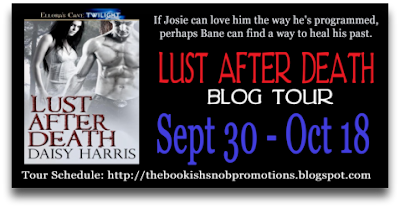 I’d love to welcome you to the Lust After Death Blog Tour today! Author Daisy Harris is joining us today to promote her new release, share a little about her writing and yes, there’s also a giveaway! Whether you love zombies or are just a little curious about these sometimes repulsive paranormal creatures, you’ll want to stick around…you won’t regret it!
Read my review of Lust After Death here.

The Ex Issue by Daisy Harris
When writing romance, especially erotic romance, there’s always an issue of the characters’ sexual pasts. Sure, one can write virgins. A writer can create paranormal, science fiction, fantastical, and/or historical reasons for a character’s virginity. But if that writer’s like me—turning out a story every 2-3 months, the excuses for chastity begin to wear thin.
For example, my Lust After Death heroine Josie is a virgin because she’s a re-animated human brought back to life only a few days ago. Literally born yesterday, she had no recollection or understanding of sex. Granted, she has an (albeit brief) abusive past with her creator. But with Josie, I didn’t have to worry about the ex issue. She was a blank slate.
Her hero Bane, not so much. But if he wasn’t to be a virgin (and really, the guy had no possible excuse not to have gotten around to having sex.) who were these women of his past?
The answer was simple—his sexual relations had been confined to brief and sordid encounters, always while drunk, and never with women who’s named he would remember. In other words, he was an emotion virgin. The situation worked for Bane because he was so cut-off, gruff, and anti-social. It fit his personality. But what of other heroes and heroines I would write in the future? With each new character I write, I come up against the question of their past. And I’m forced to find new ways to express their connection with past lovers without overshadowing their relationship with their current co-star.
Here’s a few examples of how I, and other authors, have dealt with the ex issue:
1. “No one ever meant anything to me before you.” –The casual sex excuse can work on occasion, but I find it… Well, it only works in very circumscribed situations. Most people form some kind of emotional attachment to people they screw. So if they’ve slept around a lot, it stands to reason that they would have cared about at least one of the people they’d done the horizontal bone dance with.
2. “I was a sex slave, and therefor never enjoyed the sex I had.” –Outlandish as this excuse is, I LOVE IT. Many of my favorite heroes are former sex slaves or prostitutes, including Bones from the Night Huntress series, and Royce from my second Love-Bots book, Studenstein. Of course, Bones did have a meaningful ex, but not till the second book. The downside of this trope is that you really can’t use it all that often. Even in space, or the future or the past, “male sex-slave” was not a terribly common occupation. Unfortunately. ☺
3. “I loved once…but s/he died.” –This is the premise of my third Love-Bot book, and many other love stories as well. The only danger with this is that the past love will overshadow the present one. Authors: Use flashbacks at your own risk!
4. “I loved once, but s/he turned out to be evil.” –I’m gonna be totally honest and say that I’m not that crazy about this plot device. The reason? It calls into question the hero/heroine’s judgment. Like, I wonder why they didn’t recognize that their ex was evil. But maybe that’s just me.
5. “I was a self-centered/self-loathing/self-obsessed twit.” –That’s pretty much Bane’s excuse for not having a meaningful ex. In life, I would run as far as I could from an adult male who’d slept with several people but never grew to care about any of them. However, the “lost soul” hero type works better in fiction than in real life. (IMO.) So I like to believe that with Bane, it worked.
How about you? What’s your favorite way that authors have dealt with the ex issue? Any memorable likes or dislikes? Comment for a chance to win a copy of Lust After Death!

Lust After Death by Daisy Harris

In the Pacific Northwest, where life hurries to keep pace with technology, a re-animated bride named Josie struggles to escape her creator.

Assassin Bane Connor wants to get the girl to the Zombie Underground and receive his payoff—a mental reset that will erase his memories as well as his guilt. But an attack by a rival faction derails his rescue, and the wide-eyed female ignites desire like he’s never known.

The newborn stein needs touch to live, and wanting her is a complication Bane doesn’t need. The last thing a killer wants is a his lover who can read his thoughts, but if Josie can love him the way he’s programmed, perhaps Bane can find a way to heal his past. 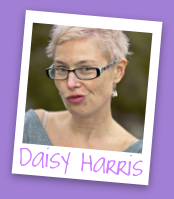 Birkenstock-wearing glamour girl and mother of two by immaculate conception, Daisy Harris still isn’t sure if she writes erotica. Her paranormal romances start out innocently enough. However, her characters behave like complete sluts. Much to Miss Harris’s dismay, the sex tends to get completely out of hand.

One lucky winner will win an e-copy of Lust After Death.
Giveaway Details:
Must be 18 years or older.
Giveaway runs from October 8th – October 15th, 12:00am, EST.
Open Internationally (ebook is in English only).
Winner will be chosen by random.org
To Enter:
*Answer Daisy’s question in the comments and leave your name and an email address.
(No answer, no entry!)
Good Luck!

Next stop on the tour:
Oct. 9th – Supernatural Bookworm