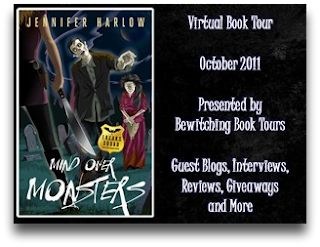 Today I’m joined by an author who shares my love for the darkside…Jennifer Harlow. Jennifer is talking about her debut novel, Mind Over Monsters, sharing why she’s glad she followed the darkside, and yes, she’s giving away copies of her new release just in time for Halloween! Stick around and learn why being a F.R.E.A.K. is a good thing!

Tales From the Darkside by Jennifer Harlow
“It takes courage to grow up and become who you really are.”
-e.e. cummings

I was never what one would call a normal girl. Apparently when I was six weeks old, my mother gazed down at her bundle of joy only to find that joy staring up at her with fierce determination (her words, not mine), and Mom got a chill. Even as a babe I was scaring people. This got worse as I got older. When other girls were playing with My Little Pony, I was making She-Ra Princess of Power and her minions go on quests to stop slavery or conquer my brothers’ He-Men and Transformers. Growing up with only brothers did not help me find my inner girlie girl. I don’t think I ever had a tea party or played house (unless it was a fortress made of skulls), but ninja princess and assassins were standard after school. (I have been killed approx 124 times by various brothers who loved to come up behind me, run their finger across my throat or point a Nerf gun to my head, and inform me I was dead. Don’t worry, I gave as good as I got.)

Then at the ripe age of eight I was introduced to horror movies. It all started with Tremors. For those of you not into cult classics, Tremors is a movie starring Kevin Bacon where giant underground worms attack a small desert town. It’s way better than you think. My best friend’s brother showed us this film, and I spent the next five years sleeping on the top bunk in case the worms happened to show up in Virginia and Florida in search of a little girl Happy Meal. (It could have happened!!!) It scared the beejepers out of me, but triggered something deep inside me. I loved being scared, it was thrilling. Thus began my love of all things gory and horrific. (Thank you Ned and Susan Hannon). Horror is my favorite genre of book and movies. Zombies, Freddy Kruger, demons, I love them all. Then, as pedophile fever began on all the news shows, I got into serial killers as well. I was the only pre-teen who knew who Dahmer and Bundy were. The fact that life could turn on a dime, that pure evil can show up in the least likely places not in the form of a preternatural monster but your next door neighbor was fascinating. It still is. It’s why I was a psychology major. Needless to say not many of my peers or even family members felt the same.
As you may have guessed my parents were pretty liberal when it came to their children. As long as we weren’t in physical danger to ourselves or each other we could explore the world and learn the consequences. (See top bunk incident). They got a lot of crap from other parents and relatives for my strangeness. My grandmother actually pulled my mother aside one day to voice her concern about me “going over to the darkside.” She was worried I would be influenced by all these dark ideas and either kill someone or invite real darkness into my life. She even put this concern into painting form, which still hangs in my hallway to show how close I came to being engulfed by the darkness. (Yeah, me and Darth Vader). 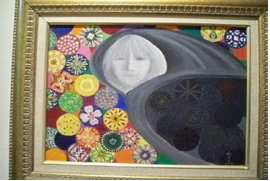 I got the last laugh, though. I did not become a serial killer or suicidal cutter as many worried…at least not in real life. Yet. No, I became something worse. An author.

My first book, Mind Over Monsters, features zombies, werewolves, vampires, a mass murderer, and a machete named Bette. I still watch horror movies, I still engage in more masculine activities like shooting and going to comic book stores with my bros instead of the salon. So the strange child did grow into a strange adult. With a book deal. I’m still that six-week-old filled with fierce determination, though now I scare people on a massive scale while laughing manically all the way to the bank. Sometimes going over to the darkside can be a good thing. Don’t let anyone tell you otherwise or I’ll get my machete.

What about all of you? Horror for girls has gone far more main-stream since my time thanks to urban fantasy and Twilight. Do you still get crap for liking vampires and werewolves? Are there things you like that make you feel like an outsider? Discuss. 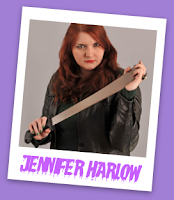 Jennifer Harlow earned a B.A. in Psychology from the University of Virginia. She has been a bookseller, radio DJ, lab assistant, and government investigator. She lives in Northern Virginia and is hard at work on her next book.

Jennifer Harlow spent her restless childhood fighting with her three brothers and scaring the heck out of herself with horror movies and books. She grew up to earn a degree at the University of Virginia which she put to use as a radio DJ, crisis hotline volunteer, bookseller, lab assistant, wedding coordinator, and government investigator. Currently she calls Northern Virginia home but that restless itch is ever present. In her free time she continues to scare the beejepers out of herself watching scary movies and opening her credit card bills.

Jennifer is a member of Mystery Writers of America, Horror Writers Association, and Sisters in Crime.

Mind Over Monsters by Jennifer Harlow
A F.R.E.A.K. Squad Investigation ~ Book One

Very few people know the truth about Beatrice Alexander. She’s no ordinary schoolteacher with a fondness for classic movies. Beatrice can move objects with her mind, an embarrassing and dangerous skill that she’s never learned to master — or embrace. After nearly killing her brother by accident, she joins F.R.E.A.K.S. The Federal Response to Extra-Sensory and Kindred Supernaturals is a top-secret offshoot of the FBI that “neutralizes” ghouls, trolls, and other monsters threatening humanity.
Beatrice has no desire to become Buffy the vampire slayer. But F.R.E.A.K.S. offers training to control her power. Also, she doesn’t feel like such a freak next to the other supernatural members, including a cute former detective who’s a werewolf and an unbearable vampire determined to seduce Beatrice. Despite a natural instinct to flee from hideous, bloodthirsty zombies, Beatrice must prove herself on her first mission to find a cunning necromancer.

5 Print Copies of Mind Over Monsters will be won by 5 lucky readers!
Giveaway Details:
Must be 18 years or older to enter. Open to US shipping ONLY.
To Enter:

Please fill out THIS FORM.

Thank you to Jennifer Harlow for her fabulous guest post and for stopping by!