Posted 30 January, 2012 by Lori @ Romancing the Dark Side in Giveaways, Guest Posts / 8 Comments

A huge welcome to Regan Summers, author of Don’t Bite the Messenger, a new and exciting urban fantasy with a perfect dose of romance! I love a good romance but there’s just something about a forbidden romance that makes a story all the better. Today, Regan is giving us a little glimpse of her characters, Sydney and Malcolm, who should be off limits to each other but find comfort in each other. Stick around ’till the end and enter the giveaway to win your own copy.

You can read my review here.

“What Tastes Better Than the Forbidden?” by Regan Summers

Thank you so much for having me, Lori. I’ve discovered so many wonderful authors and stories from your blog, and am honored to be here.

I thought I’d share a couple of excerpts from Don’t Bite the Messenger. This story started as an urban fantasy, but once Malcolm Kelly stepped onto the page – with his quick smile and wicked mouth – it expanded to include a solid romantic thread. Yes, sometimes I do write stories just to get my fictional characters’ clothes off.

Malcolm isn’t your typical alpha male. He’s a little too shifty for that, and prefers to work behind the scenes rather than directing. But he has a great sense of human, is surprisingly considerate and undeniably hot. He’s also firmly off-limits to Sydney Kildare, our heroine.

“He was like the drunken midnight-sun skydives I used to do: a bold, beautiful, very bad idea. It had been so long since I’d done anything fun.”

Syd’s a recovering wild child, and while she’s trying to be good, Malcolm appeals to instincts she’s been holding back for years. He doesn’t even have to speak to make a case for himself.

“He moved behind me, so close I could feel the warmth of his body. He traced the underside of my arms, pausing on a jagged scar on my left forearm before catching my elbows and pressing upward until I stretched my arms over my head. His hands ran down my sides, fingers gentle over my ribs and tickling light against my stomach. I opened my mouth to take in air and tasted the tropical night. I knew for a fact that it tasted nothing like him. It was raw where he was smooth, sweet where he was smoky.”

I hope that you enjoy reading about Sydney and Malcolm as much as I enjoyed getting them together. 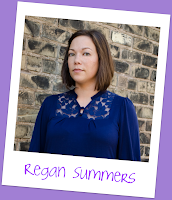 Regan Summers lives in Anchorage, Alaska with her husband and alien-monkey hybrid of a child.
She can suspend disbelief in the space of a heartbeat, is prone to spazzing out in inappropriate settings, and believes that hard work leads to happiness (after all the misery of hard work, that is).
For more information on Regan Summers, visit her here: Website |  Facebook | Twitter

One lucky winner will win an ecopy of Don’t Bite the Messenger!
To enter, fill out the form below: