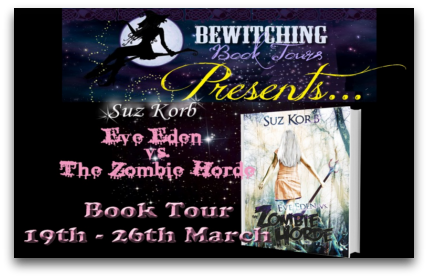 Today I have the pleasure of hosting a stop on Suz Korb’s book tour for EVE EDEN VS. THE ZOMBIE HORDE. Suz is here to chat with us on her latest release, its intriguing vampire hero/villain (I’m just not sure yet!) Nathan, oh and there’s also a giveaway…so stick around and show her some love!

The Dark Side of a Character
by Suz Korb

I’m thrilled to be given the opportunity to guest post here on Romancing the Darkside as it gives me a chance to delve into the dark vampire character of my novel. Nathan. He’s mysterious. He’s a creature of the night. He’s a bi-polar vampire who could react in any way at any given moment if provoked.

Nathan Kane: age 17 when recently turned into a vampire. He has dark red eyes when consuming anyone’s blood but Eve’s, then his eyes turn bright red for a time. Nathan has long-ish black hair and a “killer” British accent.

When I first created Nathan the vampire in Eve Eden vs. the Zombie Horde, I had no idea he’d turn out to be such a crazy-head. Seriously, that’s why I love writing supernatural fiction, the characters take on a life of their own as I write.

It’s not surprising that Nathan is such a dark and tormented vampire. Especially not after you read about the way that he was “turned”. He’s survived a lot of torture. He’s conflicted on a paranormal level about his feelings for Eve. One minute Nathan is perfectly capable of behaving normally around Eve, and the next he’s completely unable to control the blood lust cravings to bite her, to consume her very essence.

While Nathan’s character did take on a life of his own, there’s still a lot we don’t know about what’s going on in his mind in this book. Get ready though, because there’s more of Nathan Kane in book 2 and especially book 3.

EVE EDEN VS. THE ZOMBIE HORDE
BEDEVILED ~ BOOK ONE
BY SUZ KORB

Kidnapped by a vampire, epically farted on by a pug and dragged through the pits of Hell. Welcome to Eve Eden’s world in the small and strange town of Twin Forest.

Eve has goals. She has dreams and ambitions that don’t involve staying in this weird, podunk town. When supernatural forces collide, dropping her into the heart of England, she’s not pleased. When Eve said she wanted to get the heck out of dodge, she didn’t mean getting transported into a castle dungeon.

A hellish incident turns Eve’s hair white. She can’t explain a slight attraction to a vampire who’s been sent to kill her. Can life get any worse? Apparently it can, because just around the corner at Twin Forest’s cemetery…

*This ebook is not yet available for purchase*

An Excerpt from Eve Eden vs. the Zombie Horde starring Thunderbug:
The epic farting pug.

As Nathan’s lips gently (gently!) touch my own, my face burns. My eyes start to water and I don’t have a clue what I should do. So I just shut my heavy lids.

Least of all by a blood-sucking vampire!

I’m so panicked and confused my brain wanders off to the random thought of dogs. In fact, I can actually hear a dog barking in my imagination right now.

Nathan pulls away from me.

There’s a rush of air between our faces now, it immediately cools my cheeks.

“Where did that dog come from?” Nathan says.

My eyes fly open. I whip my head around to see none other than Thunderbug bounding towards us on his little pug paws.

“That pup belongs to Bubbles!” I say with a smile. I’ve never been more happy to see someone else’s dog in my entire life.

Turning my whole body toward the racing pug, I go down on one knee and reach my arms forward. I’m ready to catch him. At the rate he’s running though, he might succeed in knocking me back.

Thunderbug leaps over a stalagmite on the floor of the cave. Then he jumps over an even higher one. Impossibly, the flat faced little scamp next flies over a ten foot stalagmite. He heads toward me, jumps in an arch over my head and I watch as if in slow motion as he crashes into Nathan’s chest.

If I expected the pug to bounce off and crash to the floor, I’d be wrong.

I barely have time to register the look of surprise on his face, before he vanishes. What’s more is, Thunderbug disappears too.

No wait! Nathan’s over there, in the far corner of the cave. There’s Thunderbug too! How is it possible for a doggy to move as fast as a vampire? I don’t know, but Thunderbug is doing so.

Actually, the pug is now flashing around the room in locations different to where Nathan is appearing. During the last flash of re-appearance, Nathan blinks into the place just behind Thunderbug’s rear end.

Yep. Thunderbug, lets out a gaseous explosion from his butt that is so epic, I swear I see a mushroom-cloud blast into Nathan.

He goes down. The vampire has just been farted into submission by a super flatulent pug. 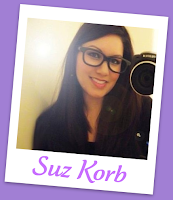 Author Suz Korb writes supernatural comedy-horror novels with a splash of paranormal romance.  The first novel in her Bedeviled trilogy, Eve Eden vs. the Zombie Horde, is a young adult adventure tale of hellish proportions.

For more information on Suz Korb, visit her here:

One lucky reader will win an ecopy of Suz Korb’s Eve Eden vs. the Zombie Horde!

Enter the giveaway via the widget below: