Posted 7 March, 2012 by Lori @ Romancing the Dark Side in Giveaways, Guest Posts / 18 Comments

I’m really excited to have a visit from author Selena Blake today! Selena is a paranormal romance writer who knows how to get her readers worked up with her sexy alpha males and great story telling that gives us an escape from the ordinary to the extraordinary.
I recently read the last book in her Stormy Weather series, Stranded with a Cajun Werewolf (thinking it was a stand alone) and fell in love her the hot Cajun werewolf shifters! Needless to say I’m getting the entire series to read in order ASAP. Stay a while, say hi to Selena and enter for a chance to win your own copy of the Stormy Weather series!

I saw a question go by on twitter the other day and it got me thinking. I know, that can be dangerous and twitter is time consuming and what am I doing on twitter when I owe you wonderful readers a new story?

The question asker followed that up by saying that she feels mainstream romance has pretty hot sex as it is.

Lately these lines seem to me more blurred than in the past, but that’s my take. What do you think?

After centuries of solitude the stars are finally aligned just right. The handsome Deveraux men of Louisiana are going to meet their match this Hurricane Season.

An action movie buff with a penchant for all things supernatural and sexy, Selena Blake combines her love for adventure, travel and romance into steamy paranormal romance. Selena’s books have been called “a steamy escape” and  have appeared on bestseller lists,  been nominated for awards, and won contests.

When she’s not writing you can find her by the pool soaking up some sun, day dreaming about new characters, and watching the cabana boy (aka her muse), Derek. Fan mail keeps her going when the diet soda wears off so write to her at selenablake@gmail.com.
For more information on Selena, visit her here:
Website | Facebook | Twitter 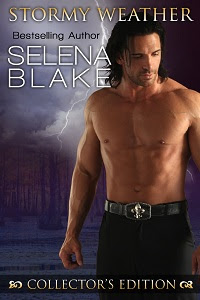 A big thanks to Selena Blake for visiting today!