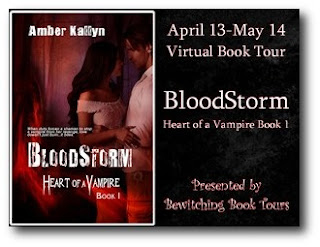 Happy Friday the 13th! Most people think of today as being unlucky, and while I can be a little superstitious, Friday the 13th doesn’t have to be dark and dreary. Today we’re celebrating Amber Kallyn’s release of BLOODSTORM, book one of the Heart of a Vampires series. There’s a sexy excerpt ahead and some goodies to give away so stay with us and show Amber some love!

BLOODSTORM
HEART OF A VAMPIRE ~ BOOK ONE
by AMBER KALLYN

When duty forces a shaman to stop a vampire from her revenge, love doesn’t just burn… it bites.

For two hundred years, Niki DeVeraux has been tracking the monster who murdered her family and made her a vampire. She finally catches up to him in a small Arizona town, only to face more than she bargained for. Amid an imperious vampire King, a shaky truce between the local clan and shifter pack, and a too-sexy sheriff who makes her remember she’s still a woman, Niki’s single-minded purpose is threatened for the first time since her turning.

Between his duties as Keeper of the peace for the Magic Council and heir to his tribe’s shamanistic magic, Sheriff Shane Spencer’s job is to protect humanity and stop the friction between the local Arcaine races before it turns into an all out blood war. To make matters worse, there’s an irresistible rouge vampire in town enflaming his senses.

When wolves start turning up dead, the tension between the paranormal races grows and suspicion falls on Niki. Shane knows she’s not to blame, and it has nothing to do with the primal urges she stirs within him. Working together, they must find a way to stop the hostilities from going over the edge. Trouble is, the desires raging between Niki and Shane might prove more dangerous than the surrounding threats.

An Excerpt from Bloodstorm
There was little warning as the air stirred. The sheriff slammed his hands on the fence, one on either side of her, trapping Niki between his body and the wood.
She glanced up at him, amused.
He practically bit out his words. “I have a dead shifter with vampire marks, a truce close to breaking, though hell if I can figure out all the whys, and a Rogue vampire in town.”
His scent overwhelmed her and Niki couldn’t resist playing with fire. Just a little. She leaned closer. “And I’m obviously guilty. After all, I’m a murderer merely because I’m a vampire.”
She bared her fangs.
He didn’t flinch. His face reddened and he glanced past her, to the wooden fence, before meeting her gaze once more. His voice softened the tiniest bit. “I didn’t mean that the way it sounded.”
“Oh? It was pretty clear to me.”
He opened his mouth, then snapped it shut. Niki continued to stare at him, wondering what he’d been about to say.
“Look,” Shane said, his voice soft and seductive now. She didn’t trust it. “I believe you didn’t do this. But if you know who’s behind the killings, I need to know too.”
“You can’t con me with sweet smiles and pretty words,” she replied, though her breath came just a little faster at his nearness. He smelled of soap and smoke and spice. It set her nerves on edge and she could barely think as his scent filled her.
His eyes widened as if he could read her thoughts. She licked her lips and his gaze drew lower, to her mouth. He swallowed loudly, drawing a tiny bit closer.
As if pulled by some magnetic field emanating from him, Niki leaned in.
She stared into his golden eyes, unable to break from his gaze, to move back from the hot energy rolling off his body.
“Niki,” he whispered huskily, need filling his voice. His shoulders tightened and his jaw clenched.
If she hadn’t been who she was, her body would have melted into a puddle, right then and there. She couldn’t bring herself to pull away.
Time stood still, the rest of the world fading into nothingness. Thoughts of her duty faded. All she could do was stand before him as her body came alive, reminding her she was a woman.
Shane growled, crossing the last hairsbreadth of distance between them. He pressed his lips to hers, firm and warm.
Gasping against his mouth, she drank in the feeling.
His touch was electrifying. Inside her, something long dormant and frozen for centuries began to wake. The short stubble on his chin scraped against her skin deliciously.
An unbidden desire to embrace him fully pushed at her. Her hands curled with the thought of what his skin, his flowing hair would feel like. The thought finally gave her a sliver of control. She broke away, slipping beneath his arm and backing up to the other side of the alley.
She stared at him, breathing fast and sharp.
He seemed shaken. As unsteady as she felt.
***

One of those rare breeds, Amber Kallyn is an Arizona native who can trace her family’s history through six generations in the state. She lives with her sexy husband, and their four very active children. Included in the menagerie are two cats (though there’s always room for more) and two dogs. We won’t count all the fish. She also writes urban fantasy under the name Higley Browne.

Amber loves the paranormal, from dragons to werewolves to vampires. She’s currently at work on her next book, probably running around the house acting out a fight scene with her collection of swords and daggers. Or maybe, wishing she had claws to practice the other fight scenes.

A voracious lover of the written word, Amber found at an early age that she could read fast. Really fast. She devours novels by the day, novellas by the hour, and is always looking to get her hands on more.
For more information on Amber Kallyn, visit her here:
Website / Blog / Facebook / Twitter / Newsletter

THE GIVEAWAY GOODIES
GOOD LUCK AND DON’T FORGET TO LEAVE A COMMENT!