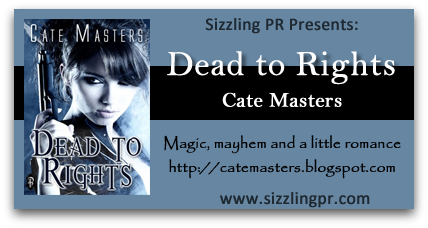 Today I’m thrilled to be hosting a stop on the Dead to Rights Blog Tour. Author Cate Masters new release is an urban fantasy filled with magic, intrigue and archangels, my new fave paranormal beings. Keep reading for Cate’s take on angel warriors and to learn more about this exciting new release that’s definitely on my wish list!

When I first wrote Dead to Rights, one of my crit partners was actually surprised by the idea of a warrior angel. To him, it seemed the opposite of what angels represented – peace, love, and protection.

Warrior angels may be popular in current fiction, but the idea’s nothing new. Even the Bible contains references to angels who carry out their duties with sword in hand. How better to protect humans against danger?

The archangel Michael’s one of the most prominent warrior angels, and one of the most well-known angels in general. According to my research, the guardian angels are “all aspects and forms of Michael” and also the angel responsible for guarding the planet Earth. So it seemed natural for Michael to be the warrior angel assigned to intervene in a mixup of souls, possibly the biggest travesty of justice in all of Heaven.

Fallen angels are also nothing new, and Dead to Rights is based on the idea that choice is what defines us, whether human or angel. Research revealed the punishment for angels is eternal, while humans can be forgiven.

I was also fascinated by the idea that angels coordinate the messages some attribute to The Universe. According to some sites, if you see number sequences such as 111, 333, etc., those are signs that angels are guiding you.

Have you ever felt as if you’d received a message from The Universe? Maybe a song with special meaning to you played at a time when you most needed a boost? Or a label, maybe a road sign that conveyed a message you needed to hear?

My dark paranormal, Dead to Rights, is available from Decadent Publishing: http://www.decadentpublishing.com/product_info.php?products_id=500&osCsid=1rs5de21jcfh2ov3ikjhd26tk4

DEAD TO RIGHTS
BY CATE MASTERS 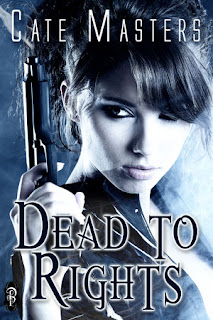 Identity theft sucks. But it’s worse when someone steals your life—body included. All memory of her life before waking up in a mental facility has vanished. Or was erased. Now she has to figure out how to get it all back…

Her only hope of learning the truth lies with one man. Problem is, he’s the leader of a cult. Her only choice is to follow him into his sordid world, where a darker evil lurks.

With a little help from an archangel hellbent on revenge, she may have a chance to learn the truth. But will it force her to make the hardest decision of her life…or death?

I’d love for you to check out the Casting Call (who I imagined in these roles) and more at: http://catemasters.blogspot.com/2009/06/dead-to-rights-contemporary-paranormal.html

Thanks so much for having me at Romancing the Darkside today! It’s been a pleasure.

Check out the book trailer below: 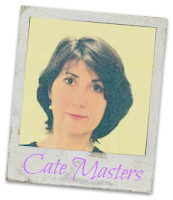 When not spending time with her family, she can be found in her lair, concocting a magical brew of contemporary, historical, and fantasy/paranormal stories with her cat Chairman Maiow and dog Lily as company.

Look for her at her Blog, Facebook and in strange nooks and far-flung corners of the web.

For the entire blog tour schedule click the image below: