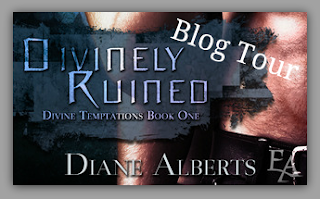 Today I have author Diane Alberts joining us on my stop of her Divinely Ruined Blog Tour! Check out my interview with the paranormal romance author and enter the giveaway for your chance to win a copy of her latest release…the alone cover was enough to put on my reading list! And now let’s get onto the good stuff…

Author Interview with Diane Alberts
RTD: Welcome to Romancing the Darkside Diane! I’m really excited to have you here today and can’t wait to talk to you about your latest release Divinely Ruined so let’s get right to it…

DA: Thank you for having me here today!

RTD: Name 3 things that would surprise your readers about you.

RTD: With all the interesting supernatural creatures out there to choose from, what inspired you to write about angels?

DA: I have read so many books with angels in them, but I wanted to make one that was different from all the others. And my angels are definitely different. LOL

RTD: Angels are for the most part seen in a religious and positive light, is it difficult to write them as flawed and sexual beings?

DA: It was a little hard at first, but Rebecca was so insistent that her story be told that it made it easier. My angels are human beneath it all, and humans as a rule are not perfect. We covet, we curse, and we want things in life. Rebecca is no different.

RTD: What was your favorite chapter or scene to write in Divinely Ruined and why?

DA: I love the scene toward the end where Rebecca and Tony are on the couch talking. I can’t give more information than that, but it’s such an emotional bonding between them, and I loved watching Tony try to do right by Rebecca, but not hold her too far away.

RTD: Rebecca sounds like a feisty heroine, my favorite! Describe her using just one sentence.

DA: She doesn’t need or want a man in her life, but she also doesn’t count on her first assignment being so frustratingly handsome.

RTD: Which characters do you find harder to develop, the strong but flawed heroines or tortured heroes?

DA: The tortured heroes. I love, love, love them, but tend to take their asshole attitude a little too far. LOL. My editor is amazing at catching those instances, and fixing them.

RTD: Where do you feel most comfortable writing?

RTD: Are you a fan of any book series in the paranormal romance/urban fantasy genres featuring angels? If so, which one(s)?

DA: Hm. Let me think…I can’t think of any off of the top of my head, but I really enjoy the genre as a whole. I’m just blanking out right now.

RTD: What book is currently on your nightstand?

RTD: Can you give us a little sneak peek into the next book in the Divine Temptations Trilogy?

DA: Yes! Sally is in it, and it’s a different twist where the hero is already an angel—and an old one. The heroine is feisty and fun, just like in the first book, and there’s a lot of action and tension. It’s called Divinely Ransomed.

Just for fun:
Favorite movie/TV angel? I can’t think of one!! My brain is dead! LOL

If you were stranded on a deserted island and could only pick one person, who would you want for company? Ian Somerholder. I mean, uh, my husband. ;P

What’s your current guilty pleasure? …Keeping up with the Kardashians. Don’t tell anyone.

Morning person or night owl? Morning person, I guess. I do most of my work in the morning and after noon. Summer or Winter? Summer!

RTD: Diane, thank you so much for taking the time to answer all my questions and congratulations on Divinely Ruined!

DA: Thank you for having me here! 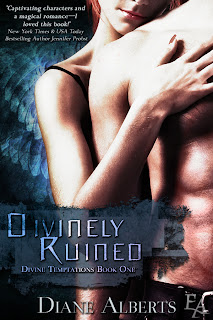 Rebecca’s life sucked before she became an angel. Crappy apartment, awful jobs, abusive boyfriends–it was no wonder she jumped at the chance to escape it all and become a real live angel. The problem is Rebecca’s not very angelic, and she’ll have to do more to earn her wings than end her love affair with the word f–er, frick.

Especially when she’s assigned to save single father Tony Weis, whose less-than-pure thoughts wreak hell on a telepathic angel’s nerves. It’s all Rebecca can do to keep her hands off him…but when she loses her memory injuring herself to save Tony’s daughter, now it’s Tony’s turn to be her angel and care for her. But will Tony’s devotion tempt her from her angelic path, even if it means being human again?

Read the first chapter for free at Entangled Publishing. 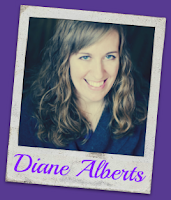 Diane Alberts has always been a dreamer with a vivid imagination, but it wasn’t until 2011 that she put her pen where her brain was, and became a published author.  Since receiving her first contract offer, she has yet to stop writing. Though she lives in the mountains, she really wishes she was surrounded by a hot, sunny beach with crystal clear water. She lives in Northeast Pennsylvania with her four kids, a husband, and a Senegal parrot. In the rare moments when she’s not writing, she can usually be found hunched over one knitting project or another.

Diane is giving away an ecopy of Divinely Ruined to one lucky winner!
Enter via widget below
a Rafflecopter giveaway