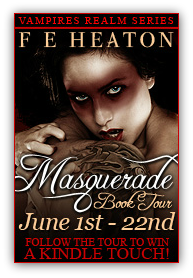 Welcome to my stop on the Masquerade Book Tour!

Felicity Heaton, also known as F E Heaton is a paranormal romance author who quickly became a favorite. Her vampires are dark and sexy and I can’t get enough of them. Felicty is promoting her lasted release in the Vampires Realm Series, Masquerade. If you’re a fan of paranormal romance or a vampire junkie like me, you must add these to your reading list, I’ll be the first to admit I read some of the books in the series out of order and was still able to follow the story due to Felicity’s brilliant storytelling.

Tynan is one of my favorite characters in the series and I was thrilled when Felicity asked me to host her interview with the dark, brooding and mysterious commander of the Venia Guard! And now without further ado, I introduce you to the star of the today’s interview, Commander Tynan…and stay around and enter the giveaway!

It’s wonderful to be here at Romancing the Darkside for the next stop on the book tour for my new vampire romance, Masquerade. Masquerade is the tenth book in my ongoing Vampires Realm romance series. Don’t worry if you haven’t read the others, as Masquerade does stand alone.

Today I’m going to be interviewing Tynan. Tynan is the commander of the Venia guard and the man in charge of Sophis and Vivek, the unruly heroine and hero in Masquerade. He’s going to tell us more about them, about himself, and also about what’s been happening at the Venia mansion since the story ended.

FH: I have Tynan here with me today to give us the dirt on Sophis and Vivek. Firstly, can you tell us a little about yourself?

TYNAN: I am a vampire of the Venia bloodline and together with my brother, Jascha, am one of the youngest vampires to achieve a high position within the guard. I believe readers have already met my brother, and myself in his story, Reunion. If anyone does not know the tale… I was turned first by a member of the Venia household, and not long afterwards my brother was turned. I was happy to be reunited with him, but it is not the life I wanted for him, even if he is happier now than he ever was as a human. When I was human, I was a member of the Russian military with my brother. We worked as special agents and continue to use that knowledge and experience to our advantage as vampires.

FH: When we caught up with you in Masquerade, you had made it to the position of commander of the guard. What was it like to achieve that position at such a young age? I mean, you’re not even sixty in vampire years yet.

TYNAN: True. I am very young and it did prove a problem at first, but a vampire’s strength and abilities don’t just come with age. I have always been strong as a human, and it seemed my strength carried over into my life as a vampire. The experience I had as a special agent in my human life also gave me a solid ground to build upon as a vampire in the guard. Both myself and Jascha quickly moved through the ranks despite our age, and I believe he probably would have been commander rather than me if he had decided to remain at the mansion rather than going with Marise to the Law Keeper compound in Vilnius.

FH: Because of your position as commander, you were in charge of Sophis and Vivek, both of whom are older than you are. What were your first impressions of them?

TYNAN: That sense does not necessarily come with age.

TYNAN: *smiles* I first met them when I was just a guard like they were but we were never part of the same squad or sent on missions together, so I never really paid much attention to them. I was focused on gaining ranks within the guard, much like they were, and on my brother. I first worked with them shortly before they suffered the brutal attack by the Romanov twins. It was obvious they harboured feelings for each other, so I didn’t understand at first why things became strained between them after the attack. As I gained ranks, I began to take more notice of other guards, and their behaviour stood out. When I became commander, I felt it was my duty to somehow repair their relationship. Not out of any sense of friendship, but because they were a danger to the family and my position.

FH: Because they constantly fought?

TYNAN: Yes. As commander, every guard was my responsibility and their behaviour reflected poorly on me. I also felt it was likely to get them both killed, or somehow result in something detrimental to my bloodline. There was another reason I often intervened though… having seen my brother and Marise part on an argument and remain apart for decades, all because Marise would not tell my brother the truth… I did not want to see that happen to Vivek and Sophis. I knew they still had feelings for each other, and I forced them together to make them face those feelings, and perhaps spill the truth in the process.

FH: Very wise. It certainly worked. They’re together now thanks to you and probably thanks to the Romanov twins showing up again. You took a chance on them though, giving them both missions that meant they had to work together for the safety of the bloodlines. That was a huge risk.

TYNAN: It was… but I had faith that they could carry out their duties and protect the bloodlines, and that the mission would give them both an opportunity to wise up and realise their mistakes. I knew that should anything happen, the stronger lords and ladies of the bloodlines, and the Law Keepers would take care of it. I just didn’t see it turning out the way it did.

FH: No. I can bet you didn’t. Now that you’ve played matchmaker, and have gained a friend in Lord Hyperion of the Validus bloodline by the sounds of things, how have things been at the Venia mansion?

TYNAN: Change is difficult to accept and process. I think the bloodline will take some time to become accustomed to everything that has happened. I know that I will. Jascha has remained at the mansion to assist me and we are on our way to repairing the damage. Once the mansion is back in order, we will have other issues to address. Lord Hyperion has been very kind and has sent some of his Watchmen to assist us in guarding the grounds. The Venia guard find the Watchmen intimidating. They don’t say it, but I see it. It is understandable. Each Watchman is over five hundred years old after all. Ten times my own age.

FH: But it must be nice to have them around when so many of your own guard were lost. How have Sophis and Vivek been?

TYNAN: Sickening. You should see them. Whenever they think no one is watching, or even when they know someone is, they are kissing and sharing moments that make me want to pour acid on my eyeballs. They break apart whenever they notice me and it is difficult at times to keep a stern face and not laugh at how jittery they are around me now. I regularly talk to Vivek about duty rosters and other problems with the guard. He has grown up a vast amount in the past few months. The change is quite shocking and something I am still getting used to. Sophis has remained her usual self. She is determined to prove her worth, and is doing a fantastic job of it. She has been training recruits and is handling the task well. It is not easy to take twenty newly turned vampires and train them in combat. Having said that, she took Vivek and turned him from a child into a man, so perhaps it is just a natural skill of hers. *grins*

FH: I’m beginning to wonder if you need to grow up a little too… but I’ll put it down to the Hyperion effect. He’s rubbed off on you.

TYNAN: Perhaps he has. I do rather enjoy teasing Vivek and Sophis. I think Lord Hyperion would be proud of me.

FH: You don’t have a ladylove yet do you? Will we be visiting the Venia mansion again soon to recount the sordid tale of your romance?

TYNAN: *laughs* Perhaps. There is one woman who has been driving me insane recently.

FH: Ooh, now I’m intrigued… but not as much as I am about something else. I have to ask before I let you go… where do those tattoos of yours go when they caress the curve of your hips and sneak under the waist of your trousers?

TYNAN: *laughs again* I really do not think I should say. It is more fun to leave it to the imagination, no?

TYNAN: Come back and write my story, and you can tell readers just where they go. Deal?

FH: That’s a deal, alright. Thank you for taking a moment to talk with me about Sophis and Vivek, and teasing me and readers with your romance… and where those sexy tattoos go!
***

If you would like to find out more about Masquerade or the Vampires Realm series, you can visit the official Vampires Realm website at http://www.vampiresrealm.com

I would also like to take this moment to mention that there is a grand giveaway running throughout the whole of the Masquerade Book Tour. The top prize is a KINDLE TOUCH plus bundle of Vampires Realm series ebooks 1-9 (doesn’t include Masquerade), and it’s open internationally.

You can find all the giveaway details at the Masquerade Book Tour page! 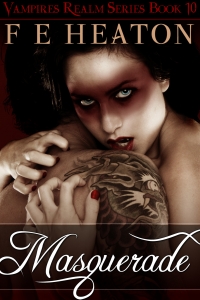 Ten years have passed since Sophis and Vivek, two vampires of the Venia bloodline, came close to death at the hands of twin hunters Aleksis and Izabella Romanov. The events of that night turned Sophis and Vivek against each other, shattering their close friendship and driving them apart.

Now, on the eve of a centenary Creator Day masquerade and at a time when things between them are dangerously close to separating them forever, they uncover a small army of vampire hunters in Saint Petersburg, led by their nemeses, Aleksis and Izabella.

With the safety of the rulers of the seven pure vampire bloodlines in their hands and their chance for vengeance hanging in the balance, can Sophis and Vivek face their past and overcome their differences? Will they realise their true feelings for each other before it’s too late or will the hunters finally claim their lives as their deadly plot to destroy the bloodlines unfolds? 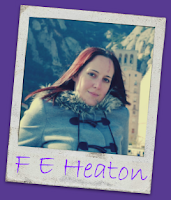 Ms. Heaton is giving away a signed, personalized paperback copy of Seventh Circle plus signed swag! 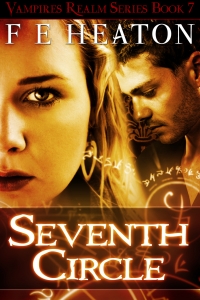 *click on image for more info*
Enter giveaway via widget below:
a Rafflecopter giveaway