Today I have the pleasure of introducing you to paranormal romance author Jane Kindred on my stop on The Fallen Queen Virtual Book Tour! Jane has stopped by to chat a little about her latest release in a new series about angels and demons and is also giving readers a chance to win their own ecopy of The Fallen Queen! Stick around while we talk good girls and bad boys in books and see how you can enter to win this new and intriguing title…

From Good Girl to Bad Boys
By Jane Kindred

I’ve always been fascinated by the mythology of angels and demons. Growing up in a very strict Fundamentalist Christian church, I was always wondering about the stories behind the Biblical tales. Why was Lucifer thrown out of heaven? He didn’t seem like such a bad guy. I remember starting a short story when I was about 13 that I never finished, about how Lucifer was misunderstood. I knew I’d probably get in trouble if I wrote a sympathetic Lucifer, so I gave up the idea, but it always nagged at me.

I also found it fascinating that so many different traditions had evolved about the hierarchy of angels. Who decided how many orders there were? What were the choirs? And when I started studying Shakespeare in high school, there were additional mythologies I’d never heard of before around the humors and the music of the spheres. People in the past took these ideas very seriously, just as seriously as the stories of the Old Testament, but they had fallen out of fashion.

I finally decided to tackle the ideas that had been roaming about in my head since my Sunday School days, and thought about how I would represent the different factions of heaven if I were to write about it. The first thing that came to mind was that I wanted to somehow “redeem” the fallen angels, just like that long-forgotten story about Lucifer. But I really didn’t want to write a religious story. I wanted to write about angels as fantasy creatures.

In my Heaven, angels and demons both dwell in the celestial sphere. The demons are merely the peasant class—angels without pedigree—who live in a celestial ghetto outside the “pearly gates,” known as Raqia. The heroes of my story are a pair of demons who are not only peasants, but scoundrels and thieves. Because, let’s face it, scoundrels and thieves have a certain inherent hotness.

As the story progressed, I discovered that my scoundrels were in fact hot for each other. But if you’re looking for a traditional m/f romance, don’t worry; one of them, as he himself describes it, is “less discriminating” when it comes to gender. When an angelic grand duchess climbs into his bed, a whole new kind of hotness ensues, and the consequences of their actions will ultimately spark a celestial revolution.

Which do you think make hotter heroes, angels or demons? Do you have a soft spot for one or the other?

The House of Arkhangel’sk – Book One – by Jane Kindred 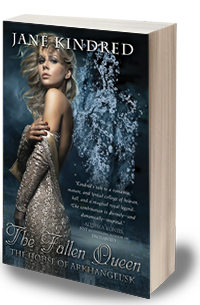 Heaven can go to hell.

Until her cousin slaughtered the supernal family, Anazakia’s father ruled the Heavens, governing noble Host and Fallen peasants alike. Now Anazakia is the last grand duchess of the House of Arkhangel’sk, and all she wants is to stay alive.

Hunted by Seraph assassins, Anazakia flees Heaven with two Fallen thieves—fire demon Vasily and air demon Belphagor, each with their own nefarious agenda—who hide her in the world of Man. The line between vice and virtue soon blurs, and when Belphagor is imprisoned, the unexpected passion of Vasily warms her through the Russian winter.

Heaven seems a distant dream, but when Anazakia learns the truth behind the celestial coup, she will have to return to fight for the throne—even if it means saving the man who murdered everyone she loved.

The Fallen Queen is available now at Amazon and Barnes & Noble. Pre-order your copy of Book Two in The House of Arkhangel’sk trilogy, The Midnight Court (Amazon | Barnes & Noble), coming in August 2012.
View the Book Trailer for The Fallen Queen: http://www.youtube.com/watch?v=hiT86lm6hZ4 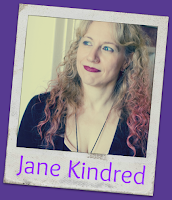 Jane Kindred began writing fantasy at age 12 in the wayback of a Plymouth Fury—which, as far as she recalls, never killed anyone…who didn’t have it coming. She spent her formative years ruining her eyes reading romance novels in the Tucson sun and watching Star Trek marathons in the dark. Although she was repeatedly urged to learn a marketable skill, she received a B.A. in Creative Writing anyway from the University of Arizona.

She now writes to the sound of San Francisco foghorns while two cats slowly but surely edge her off the side of the bed.

An ecopy of The Fallen Queen by Jane Kindred.
Enter via widget below:
a Rafflecopter giveaway